You are here: Home / BREAKING NEWS / Amour: A Masterpiece, or Just Plain Sad?

It won the Palm D’or at Cannes, received nearly unanimous accolades, and now it’s received the coveted distinction of having Oscar nominations for both best foreign language film as well as best picture. Amour is not just the most praised film to date to come from Austrian director Michael Haneke, but arguably the most acclaimed film to come out in years. In anticipation for the Academy Awards, BAMcinematech will begin showing the film tomorrow, and I strongly suggest that all serious movie goers (who haven’t done so already) to go see this heartbreaking, and vivid film, that is perhaps a masterpiece, and most certainly an unforgettable work of art.

As the title suggests, Amour is certainly a film about love, but it’s too dark to be considered anything romantic. The film centers on the elderly couple of Anne (Emmanuelle Riva) and Georges (Jean-Louis Trintignant), two retired French music teachers who live around the Parisian area. There both in their 80s, but they still enjoy going to concerts, listening to music, and visiting with their daughter (Issabelle Hupert). Unfortunately, things all go for the worse when one day Anne slips into a catatonic state for a few minutes. They immediately go for medical attention and discover she has a problem with her brain. The movie then follows Georges as he tries to care for Anne, as her condition continues to grow more harrowing.

Seeing that the film almost takes place entirely inside the couple’s flat, one might wonder why Haneke didn’t option the film as a stage play instead. Thing is, Amour works beautifully as a film due to the articulate shots, and Haneke’s unique sense of direction. Although Amour has been receiving plenty of press for how different it feels from Haneke’s more sadistic films (I.E. Funny Games, The Piano Teacher), it’s important to note that the directors skill with the macabre is definitely in effect here. A minimalist film maker in every regard, Haneke uses trace amounts of light and color in this film, so as to let viewers feel the graveness. Also, the film has one or two dream sequences that definitely take a few pages from his time directing quasi-horror films. Some people I’ve talked to have even told me they feel that the film still has a cruel sense to it, but even if that’s the case with Haneke’s craft, it couldn’t be any less true with regards to the performances.

Both Emmanuelle Riva and Jean-Louis Trintignant are veteran French actors from the New Wave period, and it’s likely that this film will be seen as a latter career triumph for both of them. As mentioned before, Haneke directs his film’s with a minamalist’s eye, but it so complements the performances. Through Haneke’s POV we don’t necessarily get to see into the minds of his characters, but their actions and facial expressions give us all that we need. Trintignant gives a mighty performance, whose suggests that his grief is just as harsh as his ailing wife’s. Speaking of whom, Riva might even give the stronger performance of the two leads, which is most impressive seeing that she hardly does much of anything. For most of the film she is paralyzed and confined to beds, but her expressions of pain fully communicate her loss of consciousness. Issabelle Huppert (a previous collaborator with Haneke) gives a limited, but very weighty performance too. One scene with her character in particular resonates with the film’s message as a whole

Amour is a difficult film for sure, nor is it very easy to watch. Still, it’s a very vital film that pulls no punches with exploring the tumultous emotions and acts that come with coping with death, after a life that was so dedicated to love. It’s no wonder that the film has received so many accolades, as the elderly are more likely to have a stronger response to it than younger age groups would. Some people have theorized that the reason Amour received so much attention from the Academy is because many of the voters are of the same age as Georges and Anne, and that honestly doesn’t sound like a stretch at all for me. Despite the biased nature that some voters might have, Amour is a huge victory for Michael Haneke and another must-see for this year. Besides The Master, I feel this was the most accomplished film of 2012. 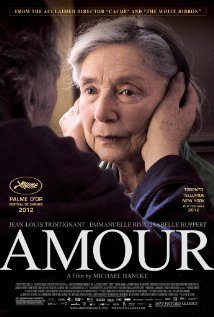