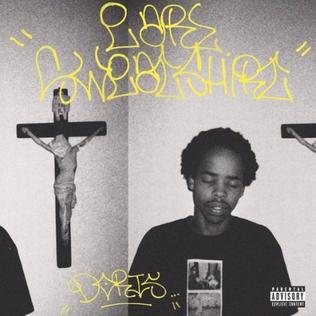 If you’ve been following underground hip-hop collective Odd Future (aka Odd Future Wolf Gang Kill Them All AKA OFWGKTA AKA Golfwang) then you’ve probably been hearing quite a bit about member Earl Sweatshirt. Thing is, you probably haven’t heard him rap all that much. Following the release of his well received received mixtape Earl back in 2010, the then 16-year old rapper mysteriously vanished, with not even his fellow group members being aware of his whereabouts. Rumors began to circulate that Earl’s mother had sent him away to a reform school due to his violent and sexual lyrics, and it didn’t take long for “Free Earl” shirts to pop up. Now, we know that Earl (real name Thebe Neruda Kgositsile) had been spending the last two years at a Somalian boarding school, but he claims it was for his trouble making and substance abuse rather than his explicit lyrics. Now, at the still budding age of 19, Earl Sweatshirt has finally released his long discussed debut album, and for the most part it lives up to the hype and extended wait.

Odd Future has gained a lot of attention due to their modernized take on horrorcore-cum-shock-rap, but Earl seems intent to prove that fans come to the music for its energy and attitude, rather than to hear graphic stories of rape and dismemberment. He let’s his guests speak their minds, but Earl keeps any violent thoughts he has to a minimum and is more interested in coming off as relatable and personal here. On the track “Chum”, Earl goes through his life story a bit and also discusses his frustrations with his perceived image (“Too black for the white kids and too white for the black”). He even tries his hand at romantic songs such as on “Sunday”, which features a rapped verse from the group’s revered singer, Frank Ocean. With explicating on how his career comes before romance, and a chorus that has Earl explaining that his love life isn’t as blissful since he quit marijuana, “Sunday” is a song that’s as sweet as it is paranoid, and a very close cousin to Tyler, the Creator’s two recent love songs, “IFHY” and “Awkward”.

Earl certainly hasn’t completely abandoned his hard-edged lyrics though, only now his wordplay is more abstract and subtle. On “Centurion”, Earl spits an incredibly tight verse over a twisting beat, where he describes an urban legend horror story that isn’t always clear to make out, but that certainly doesn’t prevent it from being scary. Then on “The Guild”, featuring a verse from Mac Miller in typical depraved form, Earl talks about more creepy things, all while using the tried-and-true Odd Future method of using audio systems to lower your octave. He claims that while in Somalia he read a lot of novels (he’s particularly a big Vonnegut fan), and it certainly shows in how much stronger a rapper he’s become. Since the inception of Odd Future, it’s been clear that these guys have been trying to do an Eminem, where they can come off as really nice guys who just happen to rap about horrible things. It hasn’t always worked though, and at times I’ve even found all the shock raps a bit childish, that don’t even carry much meaning to them. Earl, however, has accumulated the intelligence and life experience for us to really delve into his rap persona. Doris is the closest that Odd Future has come to perfecting their formula for teen-angst mixed with teen-sentimentality.

Unlike other Odd Future releases that are almost entirely produced by founding member Tyler, the Creator, Doris welcomes a plethora of different beat makers on it, including Earl himself under the alias randomblackdude. While it still has heavy use of piano and instrumentals courtesy of Tyler, Doris also sees plenty of sampled tracks, and it’s further proof how intrinsic the Wu-Tang Clan has been towards the group’s style. Speaking of which, The RZA himself handled some of the production on this album, and even does the chorus for Molasses, a short, slow and addictive little song that perfectly blends the Wu-Tang and Odd Future worlds. The album’s final track, “Knight”, samples The Magictones’ “I’ve Changed”, which Raekwon also used for his single “New Wu”, yet it’s still handled in a fresh way here. On the song, Earl and guest rapper Domo Genesis rap their verses while they continually grow lower and lower in tone, which actually has a fairly mesmerizing effect for the closing track. Still, the sound of the album doesn’t seem drastically different production wise from the group’s previous albums and mixtapes, which certainly isn’t a problem, but those looking for the group’s next major leap forward after Frank Ocean’s beloved Channel Orange, may be a bit disappointed.

All in all Doris is a very strong rap record that is as much a product of hip-hop’s rich history as it is the mind of a teenaged American boy. It’s not classic status though, as the album’s pace is a bit messy, and it also can be a little hard to interpret what Earl is trying to communicate at times. It is addictive though, and a serious step up from the Earl mixtape, which makes one hope that Earl Sweatshirt will prove to be one of those rare rappers who only gets better with age. Seeing that he’s still not old enough to drink, that’s enough to raise one’s hopes even further, if not outright make your mouth water.