You are here: Home / ENTERTAINMENT / On Your Grind: Follow Yourself

The stories we tell about successful people all have very similar threads, when you take a closer look. You see tales of struggle, hardship, loss and then? Magic.

Something changes, and someone gets a break. They pull themselves up by their bootstraps, succeed against all odds, turn lemons into Lemonade. We applaud this narrative and its dramatic arc for a variety of reasons, and we have since the dawn of mankind. Why? They lift us up, give us hope, and offer a glimpse into the perseverance and the tenacity of the human spirit.

But it’s all becoming a bit much, and a bit unReal, thanks to our always-on, 24-hour news cycle. 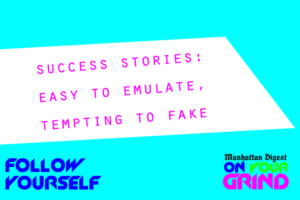 “Success” takes on many forms, and can certainly be defined in many ways. Sometimes, displays of success seem to based around our most superficial values: wealth, looks, popularity – basically something that shows you’re “better” than the unwashed masses, right?

Whereas before when this “recipe for success” was a Big Media/PR and boldface name celebrity’s area of concern… now, you and I (the slightly washed masses) are doing it, too, with social media. Presenting and displaying “success” is too easy to fake and too tempting not to try. We’re all content creators now; everyone has fans, friends and followers. Everyone’s famous, and nobody is.

Great success stories, like love stories, are titillating, and it’s great when they’re real. But sometimes they’re just not (I’m looking at you, Tay Tay). And it’s very strange to focus on looking successful rather than being successful (or, even more important: feeling successful). Real people are now feeling the effects of an image machine that only traditional celebrities had to deal with.

The reality behind the “reality” of social media continues to surface, as marketers and advertisers openly question the true influence of Influencers and if there’s any real value in having good photos and a couple of hundred thousand followers. 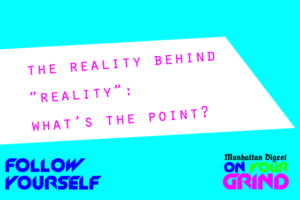 Remember the 19-year-old Australian (Essena O’Neill) who decided to renounce her Insta-fame last year, because she was tired of her “dishonest and contrived” lifestyle? Her story was remarkable because it was extreme (she is gorgeous, with almost a million followers on her social sites), but we all do it. Whether it’s flattering angles and filters or a downright staged performance of your day-to-day life, we’re all guilty of this deceptive display of Who We Are to some degree.

So what does this mean for us now? If you, as you’re on your grind, want to find greater value in both the media you consume and produce on behalf of your creative mission, you can. Think of the questions below to get more clear on why you’re doing what you’re doing. You can buy back some time (and sanity) by taking a closer look at how you use traditional media (TV, magazines, movies) and how you act online, too.

Are you trying to connect with new people? Get more people to connect with you and your work? Or do you simply want people to think or feel a certain way about you? You can use ‘em however you want, just be honest about it to yourself. 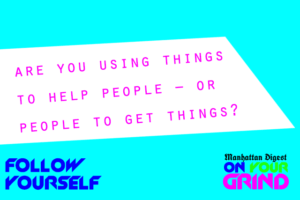 Are you using things (like social media accounts) to help make people’s lives better or using people to help you get things (likes, a sense of security, notoriety)?

Clean up your accounts.

In order to truly be on top of your game, your path, your progress, what if you stopped following the people who make you think about them and their path to success rather than your own?

Focusing too much on the former can distract you from tending to your own goals, dreams and ambitions. There’s nothing wrong with Keeping up with the Kardashians, but don’t let it knock you off your balance beam!

We know it’s a business, a game with high stakes and lots of behind the scenes players (like Quinn and Rachel, my id’s personal heroes, from the Lifetime show unReal) that are really doing all of the work. Let the players play that game. You have other work to do.

Leave your “story” to others.

Believe me, the temptation to fit your story (who you are, what you’re doing with your life, what’s important to you) into someone else’s narrative is all too real, whether you’re pitching a reporter or explaining your job to your family during the holidays. Try to resist. Let your accomplishments, and how they’ve come about, develop on their own. Don’t make yourself into a character. Don’t see yourself as an underdog, struggling and hustling. Don’t see yourself as anything! Just do the work that makes your heart sing, and let people figure it out on their own.