Solo shows are a dime a dozen; the cost effective genre is staged in levels ranging from the prestigious big leagues of Broadway to modest community theaters in small towns around the world. While I have the utmost respect for actors who tackle the form, I have left many of them wishing for either a better performance, a more compelling narrative, or a bit more detail about the person’s life and the events that have shaped it.

Once in a while, these one person plays have moved me to stunned silence-amazed, deeply touched, and immersed in a state of total awe and admiration.

The latter description is apt for Stephan Wolfert’s Cry Havoc!  Wolfert, who is a member of the critically acclaimed theatre company, Bedlam, is currently laying bare all of his humanity-battle scars and all- in the best show I’ve seen so far this year. (And yes..I’ve been to the theater more than once in 2017!)

Wolfert’s auto-biographical charts his life from a troubled childhood in Wisconsin to the United States Army, where he enlisted as a form of escape.  That road led him to serve in the Persian Gulf war and he continued to serve his country for six years.

While Rihanna found love in a hopeless place, Wolfert found Shakespeare in one; to be fair, it wasn’t hopeless, but it was in the mountains of Montana, an unsuspecting haven for the Bard.  Wolfert watched a production of Richard III, and was struck by the parallels between the words of Shakespeare and his own war time efforts. It inspired him to pursue theater, a passion and current occupation that still burns to this day.

Eric Tucker ably directs the two act play, guiding Wolfert to become a consummate performer and storyteller. His nimble build allows him to infuse some much needed physical humor into this otherwise sobering material. So easily and stealthily he infuses Shakespeare’s lines into his piece, all of them referencing the horrors and struggles of war.  Suicide contemplation, unthinkable nightmares, and a love affair with alcohol is all a part of Wolfert’s searing tale.

Act II is more akin to a 12 step program. Chairs are rearranged in a circular fashion at the New Ohio Theater, and patrons are encouraged to engage in a discussion with Wolfert about their personal experiences to war and/or family members whose loved ones have been immersed in the hell of battle. He is sensitive not to choose individuals who wish not to speak, but is adamant that veterans, “purge the poison” and talk about their time of service. In doing this , he provides an outlet and a balm of understanding and healing. Wolfert regularly hosts meetings with war veterans and implements them with Shakespearean text. 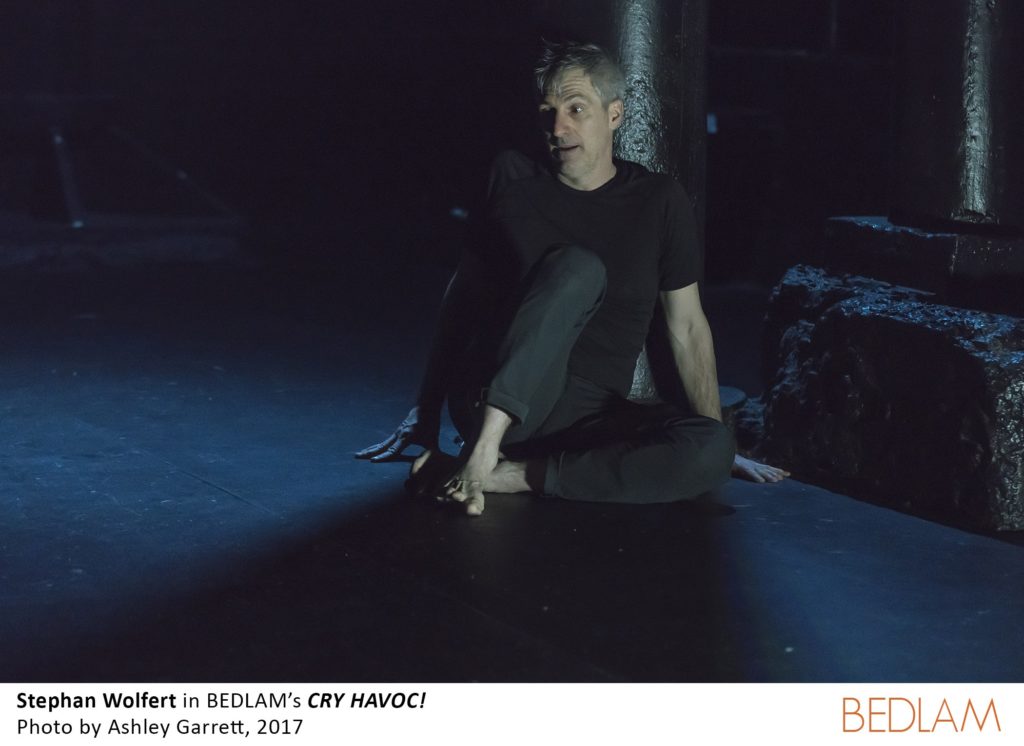 Enough good things cannot be spoken or written about Cry Havoc! . In the fall of 2016, it was reported that over 20,000 United States soldiers have been wounded in battle since 2001 in Afghanistan. Nearly 2,400 of them were killed.  Countless American men and women died in Vietnam and those who returned were treated like lepers when they reached the homeland. Wolfert reminds us of these warriors’ brave sacrifices -a lesson that should never be forgotten- disclosed in a carefully crafted tale that is both timely and timeless.