You are here: Home / ENTERTAINMENT / Marisa Tomei Shines in an Otherwise Dull ‘Tattoo’

It’s been quite a year for the Berkshires based Williamstown Theater Festival. They’ve either already transferred–or will be transferring–several of their shows to New York City. Halley Feiffer‘s Moscow, Moscow, Moscow, Moscow, Moscow, Moscow played Off Broadway’s MCC Theater earlier this summer. Next, MCC will present Seared by Theresa Rebeck.  The esteemed theater is currently represented on Broadway with Adam Rapp‘s The Sound Inside, and last night, they joined forces with the Roundabout Theatre Company by opening their 2016 production of Tennessee Williams’ The Rose Tattoo.

You You’ll need to bring quite a bit of patience in order to get through the two and one half hour drama but stick with it. For although Act 1 is a bit of a slog, Act 2 is filled with whimsical fun and charm.

Williams’ work first appeared on Broadway in 1951 and nabbed the Tony Award for best play. Still, it is rarely performed and is not one of his more beloved works. 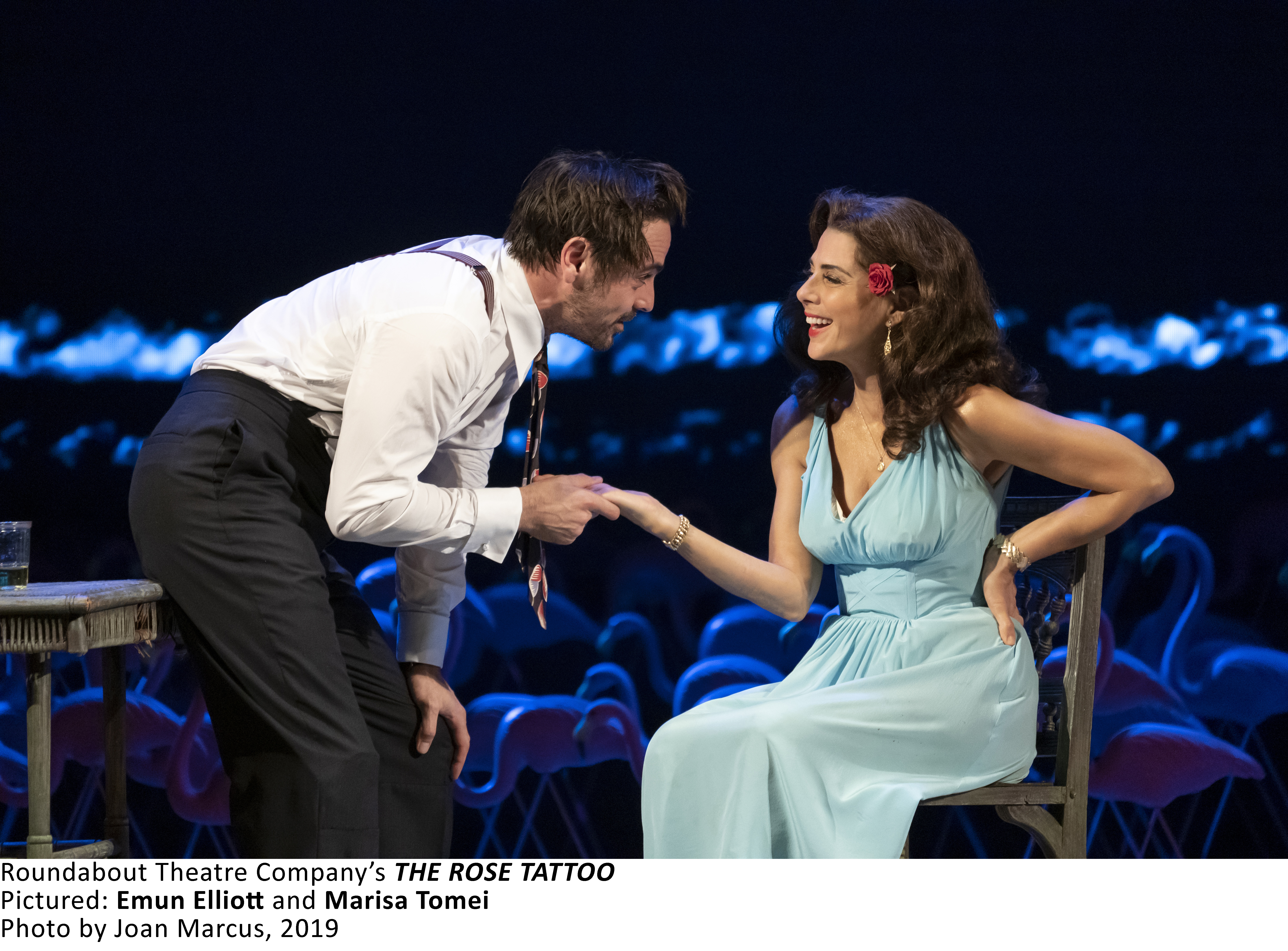 Marisa Tomei leads a rather large cast in this story about Serafina Delle Rose (Tomei), a seamstress who resides on the banks of the Gulf Coast. She’s quite proud of her love life and shocks her fellow townspeople by divulging details.  When her husband passes, Serafina spirals into a deep depression, the likes of which keep her holed in her modest home. Certainly, love will not find her again.

It’s not until Alvaro and Serafina meet that the magic really starts. True. Williams’ work is full of subtlety and metaphor, but much of it is lost here. Instead, Cullman has decided to add several musical interludes by guitarist Jonathan Linden and various Greek-like choral moments by the town ladies.

The usually slick set designer Mark Wendland has missed the mark on this one. Along with projection designer Lucy Mackinnon, the pair have gone to great lengths to create huge LED panels upstage, which continually project ocean images.  Given that the setting is listed in the program, there’s no real reason for it. Nor does there seem to be a purpose in dozens of static pink flamingos. Overall, it’s a muddied, confusing playground.

What really makes this production shine is Tomei and Elliott. The two are striking together onstage and are laugh out loud funny. Their antics are often farce-like, a refreshing turn to an otherwise adequate tale.

Tony tongues should be wagging over Tomei. You’ll not want to take your eyes off this mesmerizing and magnetic performer. You’ll just have to dig through quite a bit of wet sand to unearth the real treasure of this tattoo.

The Rose Tattoo runs through December 8, 2019 at the American Airlines Theatre on Broadway (227 West 42nd Street). For tickets and more information, click here.