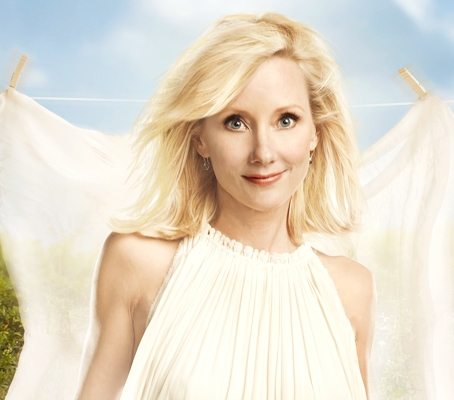 Save Me: Thursdays at 8pm Eastern on NBC

It’s been a rough 2013 for NBC. After a fall where things were finally turning around courtesy of The Voice, NBC plummeted hard in the ratings, ultimately falling behind even spanish-language Univision in terms of ratings share. Additionally, many of it’s mid-season offerings (Do Not Harm, Deception, 1600 Penn, Next Caller, and Ready For Love) were somewhere between bland, mediocre, and in the case of Do Not Harm, Next Caller (which didn’t even make it to air) and Ready For Love, unmitigated disaster. Now it’s May, and NBC finally gets to the end of its’ bench, with the executives at 30 Rock praying for some divine intervention in their newest Anne Heche vehicle Save Me.

Save Me is about housewife Beth Harper (Anne Heche), whom receives a direct line to God after nearly choking to death on a hero sandwich. Taking advantage of that second chance in life, Harper looks to do right by her friends and neighbors with some divine help.

The show opens with Beth having said near-death experience before waking up the next morning and immediately starts making all of the healthy changes one usually makes mid-life: she gives up drinking, starts running, and reveals her talking from God in the form of being able to know all of our daughter’s happenings. Her husband Tom (Michael Landis) then enters the room and asks for a divorce so he would be freed up to marry his mistress, Carly McKenna (Alexis Breckinridge). Tom pushes for Beth to get a CAT scan, as he’s skeptical of her now prophetic state.

We return to the Doctor’s Office, where a CAT scan reveals that the near-death experience activated a part of her brain “only used by Tibetan monks”. Carly then tries to push Tom further down the divorce road before being concerned that Beth has the potential to profit off of her new life. Beth then tries to make nice with her friends before inadvertently stumbling upon the core of her friends’ problems. Beth’s new attitude and divine intervention fixes almost everyone’s problems in a clean fashion. This leads to Carly throwing a drink in Tom’s face after finding out he rekindled things with Beth. Carly then leaves for Beth’s house only to find her driving into a pole and getting struck by lightning.

So…What to make of this show? Well, like many domestic comedies, it doesn’t seem to rock the comedic boat, often settling for the safe harbor of jokes coming from familial relations and Anne Heche’s trademark spaciness. While Heche does a great job playing the crazy person who believes God is talking to her (and the crazy drunk she was before that), she struggles when the show has to hit a real emotional moment, particularly when playing the mother figure to her daughter.

There also seems to be a tendency for all actions to have the absolute minimum of consequences, no matter how insane or potentially serious. This is particularly notable in the cornball ending of our pilot where Carly is struck by lightning, which is shrugged off pretty easily by Beth (outside of a small mention of it in a prayer– and even then she’s back to invoking the God floor show by the end of the episode).

Save Me also seems to move a little too fast, often being forced to juggle four story lines with three of them revolving around Beth (often with her husband, then her daughter, and her friends), with the fourth often dealing with Tom’s affair. While shows like 30 Rock and Arrested Development can often bring the chaos into one happy and wild ending, Save Me often ties these story lines together with a whimper and not a bang (considering the show’s heavy use of pyrotechnics and special effects, that’s saying a lot.)

The Final Verdict: Save Me is emblematic of the Greenblatt-ian approach to saving the Peacock: It’s safe, a little goofy, and it involves divine intervention. It’s pretty middle of the road, however on a network that whiffed on every last risk it took this year, it’s nice to see something that isn’t a flaming disaster on NBC (even if a flaming disaster would have made writing a punny headline easier). That being said, even in context, it’s hard for me to really endorse mediocrity. Check it out if you’re looking for a light, goofy, and bubbly dom-com, but if you’re expecting some appointment viewing, you’re better off looking elsewhere.