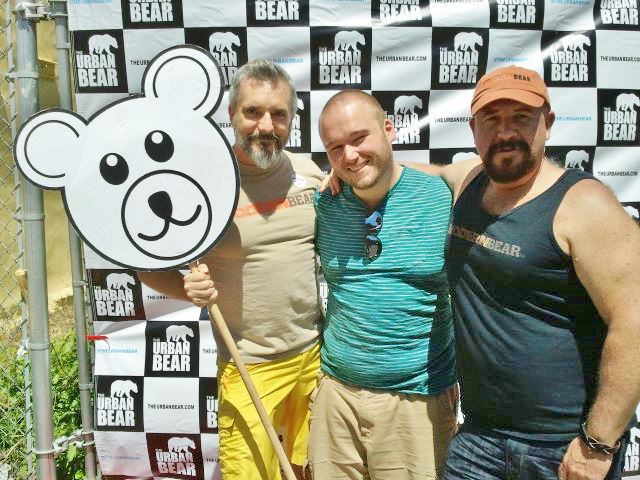 I have been a fan of the Modern Bear guys for quite sometime, when I stumbled upon their website through a photo my friend shared not of a hot bear, but of a particular “modern” design photo that I had a similar interest to.  My thought process here was, “Finally! A bear page not 100 percent devoted to shirtless men.  There is thought behind this!” And that is what the Modern Bear message is truly about. They equate it to the following- Modern Design + Bears + Retro + Beefcake= THE MODERN BEAR!  Travis Smith and Chris Bale, who are based out of Palm Springs, California, visited the Urban Bear festival a couple of weeks back and I got the opportunity to talk with them about a variety of things they have going on currently.  Something I definitely wanted to mention was their fantastic new book called “Guide For The Modern Bear”, where they visited a variety of cities and found where is the best places to eat, shop and bar hop for the everyday MB (Modern Bear).  Take a look.

So Travis, how did this whole “Modern Bear” thing start for you guys?

It’s a combination of starting it three years ago, so that was a really good time to be starting a good commercial Facebook page anyway.  It was an experiment for us, a petri dish if you will, to see if anybody was interested in a “Modern Bear” concept and our formula of modern design plus bears plus retro plus beefcake.  Those are the things we like.  It was a free way to put it out there, and see if there was any interest in that concept and then determine if we should go further with it and produce a book and all the other things we ended up producing.  There wasn’t an immediate response to it, but I would say in the last six months we added 5,000 people. It took us the past three years to get to 25,000 fans overall.

What is that increase in fans attributed to?

I think the bear thing is going mainstream, we are kind of last to become part of this trend thing.  I think you will be seeing a lot more bears popping up in movies and television.  Like Anne Hathaway’s best friend role in her next movie will go to a bear.  It’s starting to happen.  That’s one of our goals is to get a TV deal, but doing the book first is the perfect baby step for us because by processing and writing the book it also helped formulate what Modern Bear was going to be as a commercial entity.

Tell me about the book you just released.

What we love about the book and how it turned out is how accessible it is.  A lot of straight people buy our book.  Wives and girlfriends approach us and say “What is my boyfriend? Is he an otter? A wolf? WHAT IS HE!” It’s hysterical.  It’s really funny when the book is at shelves, children gravitate toward it because it’s really cute looking of course.  The shop owner usually has to explain to parents what it really is about, and sometimes they even buy it.

Well, the book is a hybrid.  It’s a guide to all the different characters in the bear world.  You got your straight up bears, you got your muscle bears, cubs, wolf like me.  We are going to do this book every year and update it like so.  Each of these characters right now lives in a different city and talk about the bear bars, a few places to eat both fancy and low brow, you know for the bears who want their diner food.  The Modern part is mid-century modern furnishing and the stores in each place.  So you got Miami, Los Angeles, New York and Barcelona and London to name a few.  In the future we are going to have Vancouver and Phoenix which is actually where this whole thing started.

As an avid New Yorker would you say it is the best place to eat from your research?

Well, we did ELMO which is the best Mac N Cheese in town.  Let me refer to the book actually! The Breslin is really good.  That is this amazing restaurant in the ACE hotel.  The Shake Shack is amazing, and Westville is my favorite place for Breakfast.  We had a super cute experience at Kitchen last night. We had comfort food like Fondue which was yummy.

What are you ultimately hopeful for?

Well, we’ve always joked about being Beartha Stewart.  We are two bears, a bear and a wolf, that are into design and into hot men and bringing those two worlds together in any which way we can.

On top of being incredibly friendly and sexy guys, they are also very down to earth and have a great message to share not only to the bear community but straight women and beyond.  For more information on The Modern Bear guys and their story, check out their Facebook, Twitter and to shop for the book and anything else log on to their main site here.