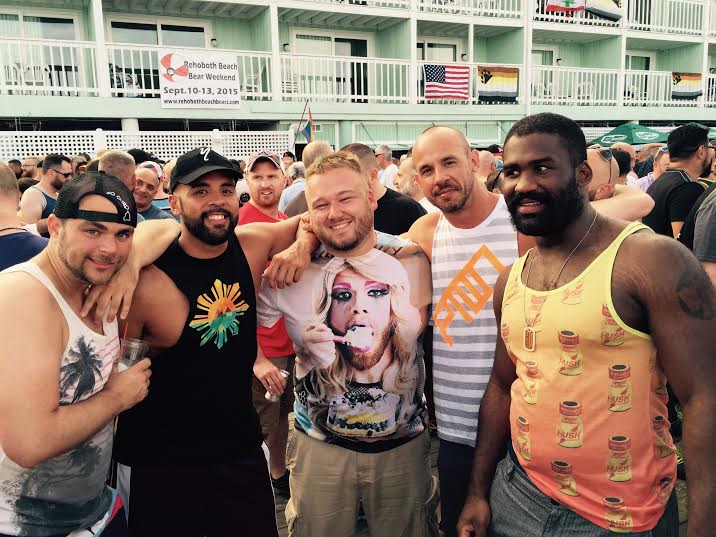 Ahh, summertime.  The weather is warm, the Mister Softee trucks are everywhere, and the bears no doubt spend one fabulous weekend flocking to Provincetown, Massachusetts for its 15h Annual Bear Week which just occurred between July 11th through the 18th.  Seeing as last year was my first year experiencing Bear Week in all of its glory (see more of that write up here), I decided to give it another shot with the full understanding of what I was going into.  Last year was a lot to take in, and I’m not just talking about the variety of men at the PTown Inn Pool nor the Dick Dock (or as I lovingly refer to it- the gay Dunkin Donuts).  I was aware of what the week had in store for me, yet this year seemed to be quite different from last year in many different ways.

This time around, I decided to relax a lot more and not stress the need to be at every single event and be out from 8am to 2am every single day.  That concept can catch up to you pretty quickly and your batteries will burn out by day three most likely.  The other thing I promised myself was to cook a lot more and eat at home as the restaurants (although fantastic) can get pricy and run up quite the bill for yourself by the end of the week.  I kept both promises and had a much more laid back, not so expensive week that actually turned out to be quite the positive for me.

This year’s Bear Week was chock full of fun times, great parties and a wonderfully organized event that really made its 15th Anniversary one of its best years to date.  The amount of men that came up this year seemed to have doubled from last year, and the general consensus that I got from this year like I did the last is that everyone for the most part has such a friendly disposition and really enjoys the level of getting to know each other at such a great capacity that it is nearly impossible for you to not enjoy yourself.  Some of the fun events that I really had fun at was the Boston Ironsides Charity event, Comedian Peter Bisuito’s hysterical comedy show, Bear Week’s very own Furball, The Fireman’s Ball and of course the daily Tea Dances happening at the world famous Boat Slip Resort right on Commercial Street.  Oh and anytime spent with my favorite guy George Unda (Detective Marcus Martinez on “Where The Bears Are”).

Before and during my time at Bear Week I was a member of the “Bear Week In PTown” Facebook page which sort of lost track of what the page was supposed to be about.  Eventually it turned into a catty posting session of men being angry at each other for throwing shade about a “Did I Bring Too Many Clothing Options” post to the ferocious taking down of selfies that people would post on the page (myself included.  Peter Griffin voice- GUILTYYYYYYYY.)  The reason why I bring this matter up is I feel content like that would make someone not want to go based on a complete strangers reaction to a simple post that in the long run really shouldn’t mean too much.  Is Bear Week overwhelming?  To some, yes.  Can you go the entire time without feeling that way?  Absolutely.  As I said in last year’s post, it really is what you make of it.  I will say that if you do go alone it is is a little harder to penetrate (giggity) the field that is Bear Week, however as I ant to go nsaid previously there are so many amicable people there that it is hard to really justify any negativity at the actual event.  Just go, find what is right for you, and enjoy the heck out of the entire thing.  It is exhausting, exciting, liberating, sexual, boozy, hilarious and so many other adjectives all wrapped in eight days or less.  It is up to you though to determine which adjectives you leave with.

Want to go next year?  Check out the Bear Week page for official registration dates and more.