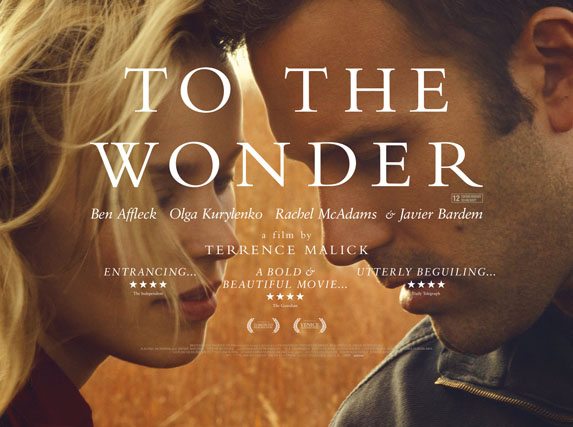 For those of you that have been reading my reviews, you may feel that I’m an overt fan of Terrence Malick. I gave a glowing review for Days of Heaven a few months ago, and I’ve name dropped him in at least two of my reviews. Thing is, I’m not so much a devoted fan to Malick, as much as it is that I realize he’s such a relevant and topical film maker at the moment. Love it or hate it, Tree of Life was a highly daring mainstream film that asked viewers to accept a new style of narrative film making, and it’s a minor miracle that a major studio released such a film in the first place. The film also brought his earlier works back to the forefront of cinematic pseudo-intellectualism, and with that the reclusive film maker entered the collective pop-culture conscious again. Now, not even two years after the release of Tree of Life, Malick has brought another didactic film that poses questions on philosophy, love, religion and humanity, and man does it suck!

To the Wonder is very much in the same language of Malick’s previous few films. Its visible plot is scarce, with Malick seeming more interested in focusing the camera on alluring images of nature, while only giving us bits and fragments of the plights that his characters are going through. What I can make of this film’s “story” however, is that it concerns an American man (Ben Affleck) who goes to France and meets a beautiful single mother (Olga Kurylenko). The two fall in love and then decide to travel back to the man’s hometown in Oklahoma. Unfortunately, troubles only arise in their relationship once they come to America, and meet a troubled priest (Javiar Bardem). That’s about it. While I did find faults in The Tree of Life I can say that I found plenty of merits in its experimentation too. I found it to be a rather beautiful film with rich thematic material, that had an incomplete story, which I cannot say about To the Wonder.

This film had virtually has no discernible story, and that isn’t even the worst part. It is maudlin, and corny as fuck. The film’s intro sequence, which involves Affleck and Kurylenko gallivanting around France, feels like grade-D Jean Luc Godard. Malick has been known to instruct his actors to do whatever they like on film, and then asking his cameramen to shoot anything of interest. While I’m certainly not against directors trying to find their films when shooting them, one has to ask how many images we can see of these two characters we know next to nothing about run through fields, or make footprints on a beach like a pair of glossy five-year-olds. It makes one wonder if Malick should have directed nature documentaries instead.

The film’s broken narrative wouldn’t even be so irksome if it wasn’t so readily apparent that Malick is trying to make a point of some kind. Like Tree of Life, the film feature minimal on screen dialogue, and instead we hear characters speak over transposed scenes. Perhaps one day we’ll find a film maker whose truly mastered this mode of storytelling, but in To the Wonder it falls on deaf ears. The dialogue is often laughably bad (unless you think it’s subversive to hear “what is this love that loves us” spoken in French), and the musings the film has with religion seems tacked on. All of Malick’s films have included symbolism regarding the bible and Christianity, but here I feel the film would have benefited had Javiar Bardem’s priest character been entirely cut. 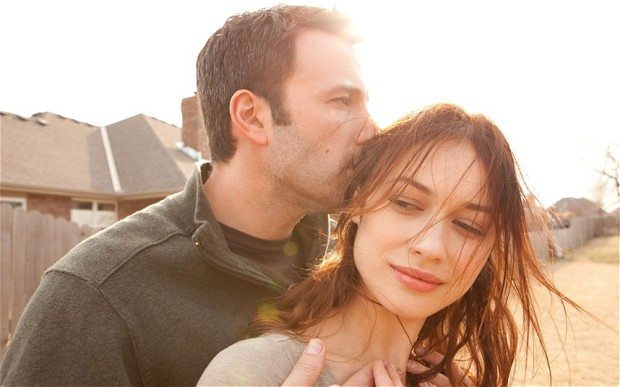 Worse still, for a film about romance, the film doesn’t feel sexual at all. Not even sensual, which is pretty hard to do seeing that fucking Olga Kurylenko stars in the goddamn thing! I personally feel that the French actress is one of the most beautiful and voluptuous of today’s leading ladies, but her mystique just isn’t captured here. Scenes that involve her strip teasing in a super market, or pressing her naked body against a cloth just don’t say anything, and come off as feeble attempts to jolt the film’s sexual energy after all these painful dips into “love” scenes that wouldn’t seem out of place on Lifetime. Ben Affleck doesn’t do much of anything in the movie too, and there really is nothing to say about the two actors having chemistry with one another.

It even appears that some of the advertisers have tried to trick people into thinking the film has more story than it actually does. Rachel McAdams’ character had been called a pivotal character for the film in a few plot summaries I read, but she’s only in the film for one sequence and then is never even referred to again. There’s no doubt that Malick had a much bigger film in mind here, as scenes featuring Martin Sheen and Jessica Chastain have all been removed from the final cut(similar to how his film The Thin Red Line reportedly had scenes cut that featured Viggo Mortenson, Mickey Rourke, Billy Bob Thorton, and other big actors), but it’s still difficult to feel that Malick was in any way prepared to shoot a functional movie. If anything, Malick should have become to realize that what he was shooting was so wonky, that he might as well try to capitalize on the film’s melodramatic elements. Hell, the film already has some allusions to the 1950s, what with its look at Americana, so it could have been an interesting plateau for Malick to have explored 50s melodrama. Of course, that didn’t happen

If there’s one redeeming quality towards this film than it is certainly the visuals, but that’s to be expected at this point. Malick’s adept skills with imagery captures an often beautiful side of Oklahoma that has perhaps never before been seen on film, perhaps best exampled in some other worldly shots of a field of bison, but it’s all for naught. The film is so repetitive that it becomes predictable what the cinematography will entail. Also, the symbolism in this film is akin to what might be used by a freshman film student. (spoiler alert) One scene involves Kurylenko’s character sleeping with an overtly creepy truck driver, who sports a heroin addict’s ribcage and a skull tattoo. The effect is so ham-fisted, you can practically feel someone punching a ham into the back of your neck.

There will be people that will be wowed enough by the visual flair to say that the film is dense and requires multiple viewings to appreciate. Hell, the fact that Roger Ebert’s last review was a three-and-a-half-star critique of this movie might encourage other critics to do the same. Sadly, I find no reason to ever return to this movie, as it’s a failure as a romantic film, a religious parallel, or even an engaging work of celluloid art…it’s also too melancholic to make for a good drinking game. So, in case you’ve missed the point, I’m saying that this film is not worth you’re hard earned money in the slightest. Instead, may I recommend that you head over to BAM this weekend for their Terrence Malick retrospective, so that you can see some of the good films in his filmography up on the big screen. 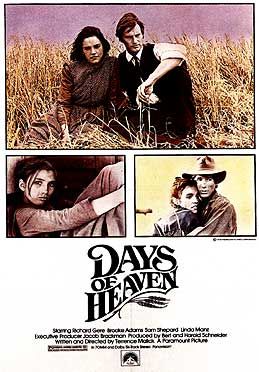 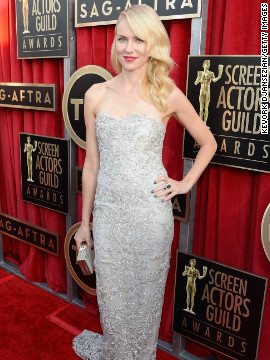 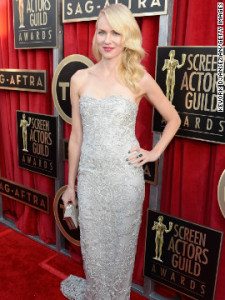 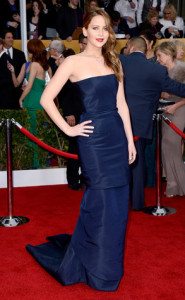