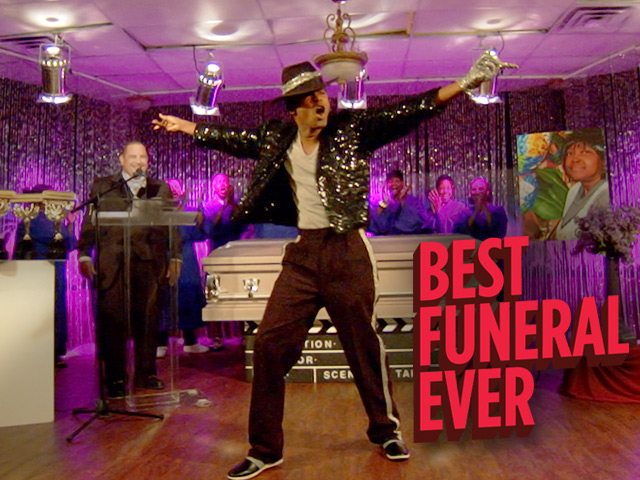 Best Funeral Ever: Mondays at 10 Eastern on TLC

For many people, the death of a loved one is a difficult and trying time. The survivor is often overcome with both grief and the pain of knowing that they will never see a person whom they spent a large portion of their life with again. Many times, however, during the funeral itself, the phrase “ a celebration of [the deceased’s] life” is often used with the promise of better times to come in the afterlife. TLC is focusing on that phrase with the intensity of a laser in it’s newest offering, which premiered Monday night.

Best Funeral Ever follows Texas funeral director John Beckwith Jr., whom has a reputation for putting together some of the most outlandish “life celebrations” the world has ever seen. Instead of the typical funeral, where the deceased initially goes through a wake before the funeral mass and burial in a traditionally somber mood, the “going home” ceremonies are full blown parties with contemporary music, custom caskets, a less formal dress code, and all sorts of interesting activities. Beckwith puts on about 125 of these ceremonies a year, and TLC is there to take you along for the ride.

When I first heard about this show, I had some serious concerns that the show was going to get in the way of the grieving process by putting too harsh of a spotlight on the mourning family (by forcing their constant input). However, thankfully, the producers instead opted to take the surprisingly more tasteful track of taking elements of an office comedy through the process of planning the most off-beat funerals most people have seen.

The show tends to shine it’s brightest when it operates in that office comedy mode. In our pilot, the best parts often involved Treanare and E awkwardly trying to explain to various people in the wedding profession that they are trying to have a wedding for two dead people while the wedding professionals look on with a mix of puzzlement and disdain. The second episode furthers this dynamic, as Beckwith’s bumbling son B3 bites off more than he can chew trying to get a casket to move 100 meters at track star speed.

Best Funeral Ever‘s cold opens concern me most, as that is where it seems like the show starts to drift into self-parody a little bit. This is particularly notable in the second episode, where we got a four minute musical production about Breakfast. While I understand these moments allow for the show to crystallize its’ premise of putting the fun in “funeral”, when it starts to veer towards ridiculous, it doesn’t reflect well on anyone. Similarly, boss Beckwith’s commentary feels lacking, often spouting out the same statements repeatedly, which is extra unfortunate because he’s our de facto narrator.

The Final Verdict: I went into this show thinking that I was going to end up exploding, LA Shrinks style. Instead, I stumbled into what’s mostly an office comedy about people who happened to work making unconventional funerals, as opposed to a show that exploited funerals for the televised eye. This is probably worth checking out once-or-twice for the spectacle and to watch funeral workers get over their heads during the course of their unconventional event planning.