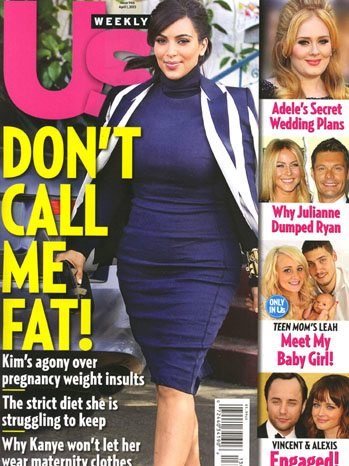 The ongoing attention that the media has granted to Hollywood’s finest post-baby bodies worries me. A lot. Our society has always held harsh criticism regarding women’s bodies, but the criticism of women’s bodies amid one of the most natural acts of life, demonstrates that we have now reached an all-time low.

Just about every other article written about pop-culture these days seems to focus not on the charitable work of celebrities, or more realistically on their careers (can you imagine focusing on those?!), but on “who wore it best”, who has the “best bikini body”, and how beautiful women like Kate Middleton, Jenna Dewan-Tatum, and Malin Akerman look mere weeks after giving birth.

As if this weren’t bad enough, celebrities are now often weight-shamed while pregnant with their offspring. Jessica Simpson and Kim Kardashian are both examples of famous mothers-to-be whose bodies were analyzed and criticized for their “with-child” figures, often called names such as “fat” and “disgusting.”

While we have almost always been a society vastly concerned with what is on the outside, often basing our values of ourselves and others on physical appearance, this unhealthy perception that flat tummies and full lips make us better people, has only grown more concerning in recent years. Open a magazine or turn on a television and you will be hard-pressed not to understand, or to even buy into these negative feelings yourself.

Some defend such critiques with the age-old notion that celebrities are “different,” that they “signed up” for such scrutiny, or that their bodies and their weight are their job; that we shouldn’t be comparing ourselves to such unrealistic standards. Yet this extreme focus on our bodies is constantly in front of our faces.

We could blame the media outlets and the magazines for reporting on such insulting topics. It’s not as if the media has never been blamed before. And maybe the media is partially at fault for their exposes on cellulite. But it is also arguable that the media is a reflection of society; that the media is simply showing us what it is that we want to see. After all, the media would lack all power if we decided not to buy into what it is that we are being sold. Though it may be easier said than done, we have to figure it out soon, because we may be doing more damage than we realize.

While the adults in our society go about their normal routines, the effects of their behavior often unknowingly trickle down to our youth. Little girls are not only listening to what the magazines and television shows are saying about their idols, they are letting it affect their self-worth.

If you, like many, feel skeptical of the media’s harm to our kids’ self-image, take a good, hard look at these scary statistics. According to an article posted on September 11, 2013 on the The Daily Athenaeum, 50-70% of healthy 6-12 year old girls think that they are overweight, and 42% of first through third grade females want to lose weight. Even more alarming is the statistic that 81% of ten-year-old girls are afraid of gaining weight.

According to a 2005 Dove Global study, 92% of girls say that they wish they could change one thing about their physical appearance, with body weight ranking the highest. Not only do girls wish to change their appearance, they are avoiding certain activities including even going to school or giving an opinion, because they feel badly about their looks.

In the past, women have used their intelligence and creativity, innovation and strength to change the world. Florence Nightingale was instrumental in changing the nursing profession; Marie Curie helped to invent the first X-ray machine and won the Nobel peace prize – twice; Helen Keller campaigned for the blind and deaf; Rosa Park’s refusal to sit at the back of the bus led to some of the most important civil rights legislation of American history. Women are capable of achieving greatness, yet with a focus on the physical, our society is silencing tomorrow’s voices.

The question remains whether or not these ideals are what we wish for our daughters. It would be naïve to believe that this is something that we can change overnight; this alarming trend wasn’t something that came about instantaneously. But we can start with ourselves, and we can lead by example.

We can refuse to buy into the idea that our bodies define us. And we can love ourselves as we are. We can focus on the notion of health and intelligence, gratitude, and selflessness; Center our attention on our bodies of work and not simply our bodies. Skinny does not equal healthy, and beauty is subjective. We are hurting the greatest tool our society has to offer: our youth. And if we are going to have any chance of fixing it, we have to start by loving ourselves. After all, little eyes are watching.