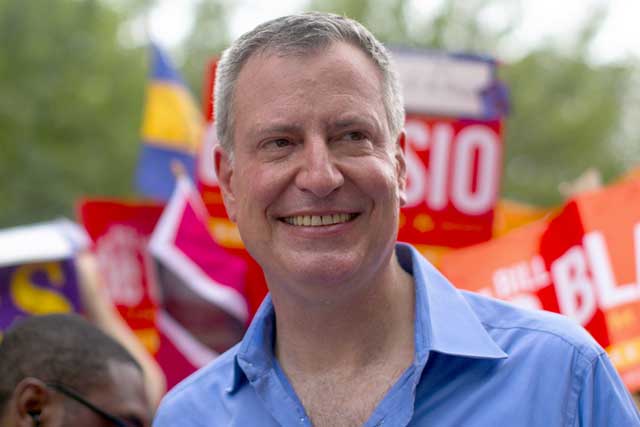 When FDR became president in 1933, the country was suffering in the Great Depression. The Hoover administration either did nothing or the wrong thing, and the nation needed action. FDR delivered with 15 major bills in the first 100 days. And ever since then, “the first 100 days” has been a big deal with journalists and talking heads whenever a new guy gets elected. While I am a big fan of New York’s new mayor, I don’t expect him to deliver much on the four big promises he made during the campaign – largely because that delivery is in the hands of others.

Let’s look at the promises first. He wants to tax the super rich to pay for universal pre-kindergarten education and after-school programs for middle-schoolers. Then, he promised to create more housing for the middle and working classes by making property developers add it to their new plans – no affordable housing, no construction permits. Also, he promised a stronger paid sick leave law. And of course, there’s stop-and-frisk, which he promised to reform.

OK, hands up, who is against universal pre-K and after-school activities for our junior high school kids? No one is against them, but paying for them by taxing those earnings a quarter of a million a year annoys those rich folks. Still, we’ve got Mr. de Blasio in Gracie Mansion and his hand-picked Speaker of the City Council Melissa Mark-Viverito commands a huge majority on the council. It’s a done deal, right? Wrong. The state legislature has the power of the purse here, and I don’t know if the upstate Republicans will approve it. Besides, Albany doesn’t move fast even when there is bipartisan support for a bill.

Forcing real estate developers to create more affordable housing won’t happen in the first 100 days either. First, New York construction in winter doesn’t move that fast. And the developers are really good at weaseling out of their commitments. When Developer Forest City Ratner put up the Barclay Center in Brooklyn, part of the deal was 2,200 units of affordable housing. The Nets and Billy Joel have played at the Barclay Center, but the 2,200 units have yet to appear.

A better paid sick leave law will get passed but there are some corporate interests and entrepreneurs rabidly opposed to it. The city council will have to fight its way through their obstructionism. There will probably be hearings, studies and the usual delaying tactics, so this won’t get done in the first 100 days either.

When it comes to stop and frisk, that stupid policing tactic that allows cops to stop anyone and demand proof of innocence, the Mayor has but to give the order. His new police commissioner Bill Bratton needs no enabling legislation. He just has to inform the NYPD that stop and frisk is over, case closed.

Rome wasn’t built in a day, and a new New York will take a while. Let’s be patient while the mayor works his way through the state legislature and the city council. As for stop and frisk, he’s going to lose a supporter if it’s still the way things are done in April.