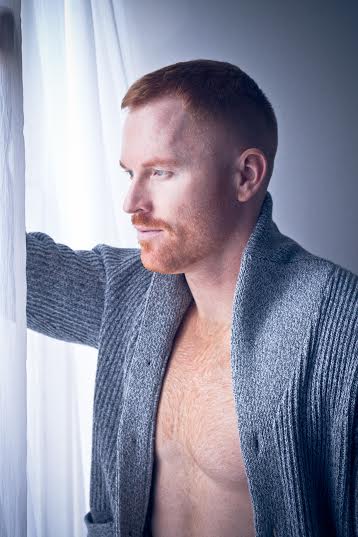 When your Twitter handle posts the following as a description of who you are- “Dancer, Chemist, Gardener, Gym Bunny”, you gotta think that this is someone who isn’t exactly a wallflower.  The person who fits this description is the one and only Seth Fornea.  Seth has become quite the popular guy in the gay community with his large followings on his social networking sites as well as becoming a big name in gay nightlife here in New York City.   I ran into him last weekend at Gay Days Six Flags when it was downpouring for the fifth time that day (not cute) and wanted to sit down with him and get to know him better.  Seth openly discusses with Manhattan Digest his big move from Louisiana, his take on why gingers are “fetishized”, his brief moment in the adult world and what his next steps are in the brand that he is building for himself.  Take a look.

Hey Seth!  Thanks for sitting down with us.  So first question is how did you get yourself into this crazy world you are in currently?

I was about 27 years old and decided to attend Southern Decadence in New Orleans.  It was my first big gay party/festival/circuit event.  I LOVED it!  The people were so much fun…it was so different to the stuffy bar scene I was accustomed to.   I wanted more.   So I started traveling to events, then decided to try my hand at Gogo dancing.  It was adventurous, it was a big contrast to my day job as a chemist.  I really like it as an outlet for my personality.  So I kept pursuing it.

You are originally from Louisiana but now live in NYC.  Being an out and proud gay man is there a large contrast with the gay community here compared to there?

Hmmmm….well the state of Louisiana is very different than NYC.  But if I were to compare NYC to say a city in Louisiana-New Orleans I could more easily compare and contrast.  Both NYC and Nola have a fun, vibrant gay scene.  NYC is definitely more trendy and fresh while Nola is more carnival and decadent.  NYC feels fast, competitive and edgy…while Nola seems a little more boy next door, relaxed, or as they say laissez les bons temps rouler (let the good times roll).  I like aspects of both cities but definitely see myself more in NYC.

What prompted the move to NYC?

My partner and I had been coming to NYC almost monthly before we decided to move here.  We really like the energy of the city, the subway/walking, the friends we have here, and most of all the opportunities that would present themselves by being NYC locals.

I always like to ask the people I’m interviewing what their favorite places to go in NYC are.  Any restaurant, club or hotspots you really enjoy going to?

I really like people watching at Washington Square Park.  I think the proximity to NYU and the village makes that a really cute place to have a picnic and enjoy the sites.  My favorite restaurant is Empanada Mama….so YUMMY!  As far as clubs….I honestly prefer the big mega parties that happen ever so often.  I don’t do the weekly clubs that much.  However I am working Spunk at the Manhattan Monster Thursday September 25th….so come out and see me!

There are a ton of men who do “gogo” dancing yet you seemed to have a made a huge name for yourself on social media whereas others just go with the flow and stay low key for the most part.  How have you been able to brand yourself so well?

A lot of fellas do gogo dancing for fun, or because they planned on being at the party anyway and wanted free tickets.  Those are valid reasons.  In those examples most of the guys have day jobs and are gogo dancing occasionally on the side for the fun and popularity.  So that’s one example of a dancer may you encounter.  Another is more of what I am.  I do Gogo dancing for the bulk of my income.  I don’t have a day job, most of my day is spent negotiating and planning future gigs.  So in my case, it’s very necessary to build up a name for oneself on all social media platforms possible.  Building that fan base was a slow organic process, from photo shoot to photo shoot, dancing gig to dancing gig, one party to another it built to what it is now. Honestly I have my fan and friends to thank for the success of it. Without their love and sharing my material I would not have the brand I do.

Is there a particular favorite or memorable moment you have had in your time as gogo dancing?  Maybe something with a fan or a particular event?

It would probably have to be the first time I worked at OZ New Orleans.  I had admired the dancers at OZ for much of my youth/college years (being from Louisiana).  So when I finally got to dance on that bar it was quite special for me.

You obviously are a ginger, or a redhead in other terms.  Gingers tend to be fetishized quite a bit in the gay community, especially as of late.  Do you take that as a pro or a con not only for you personally but for gingers everywhere?

It’s definitely a pro for marketing and negotiating-anytime there is something trending it’s a great business plan to ride the wave as long as possible.    However I would say its a con to be fetishized in ones personal life outside of work.  A lot of people meet me and the first thing they say is something overtly sexual about ginger pubic hair or how they like how I smell (apparently red heads have a very alluring sexual smell).   In most cases I haven’t even gotten their name yet, however their fetish is out in live and living color lol.  And if to be honest that does get a little awkward after a while.  Simply because what do you say back to that…..”ah I like your shirt?!”

Something that you got quite a bit of coverage on was a softcore video that you did for well known adult company Colt.  The video was actually so softcore it didn’t include quote unquote “the money shot”.  What made you do this type of video and why did you keep it at the length that you did?

The video was part of COLT’s Legendary Bodies series.  It was always meant to be soft core with no money shot.   The offer to do the video came with the same offer to have my own 12 month calendar.  I really wanted to do the calendar.  I enjoy photography and I knew COLT would hire talented people to make the calendar beautiful and something to be proud of.  In short I did the video because it was part of the calendar package.

You do post quite naughty photos on your social networking on top of the Colt movie that you did.  Thousands of fans are asking the question- are you going to do more in the adult world?

Honestly I am trying to get into acting and commercials     I would absolutely do a nude scene in a TV series, movie, or play.  I like nudity and think it can be a very important aspect of a story.  However I doubt very much I want to have sex on camera for the sake of sex.

What are your plans for 2014 and beyond?

I just finished a commercial acting class.  I am going on auditions as they come up.  I shot a few campaigns for some apparel lines.  I am dabbling in lots of things at the moment.   I will be still be dancing…fall is here and a lot of Key West trips are in the plans!

Ultimately for you personally and professionally what are you most hopeful for?

I am most hopeful for continued health and inspiration.  I like what I do, I like having my good health.  I am hopeful both of those continue!