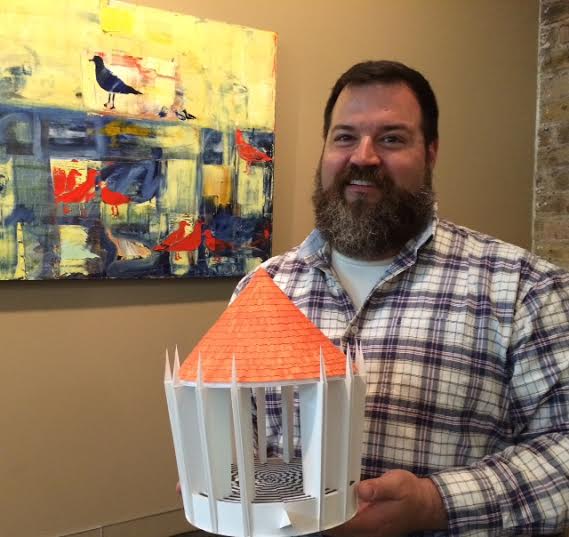 It can be quite the good thing when two people meet in an unconventional way.  It can be even when the two people at hand have a passion for what they do, especially when the background is the world of the arts.  That is what happened when I recently met Chicago native and author David Jay Collins.

David is someone who took a liking to a recent story I wrote about the bear community and after a quick couple of messages I found out that he was a booming writer with quite the first piece out there for the public to devour.  This piece is called “Gaybash”, a fantastically titled novel which is left open to much interpretation.  David was nice enough to sit with me and the folks at Manhattan Digest to discuss “Gaybash” at hand, his way into the literary & art scene, his take on the bear community and where he sees himself in the future.  Take a look.

So tell me Mr. Collins how did you end up in the literary world in the first place?

I don’t know that I’m in the literary world yet, but I’m trying! I’ve wanted to be a published author since I was a child. Someday that will happen. Growing up, my parents encouraged my creativity and I wrote short stories for my teachers to critique and loved playing with building sets like Lego and Tinkertoy. As far as toys go, if you could build with it, I had it.

So those things fueled my creative juices growing up and gave me the confidence I lacked in school. I had a few close friends growing up, but I was very shy and never felt like I fit in with any particular group.

I drew on those lingering feelings of isolation when writing Matt Tompkins, the main character in Gaybash. The story sets a reserved and untested young man on a difficult, sometimes painful journey to self-acceptance. And at the end, Matt realizes that he’s been the biggest obstacle in his own life. So that’s the story I wanted to tell.

Being that you are somewhat new in the literary world, you had to grow up with some inspirations.  Who inspired you to become a writer?

My parents read to me all the time, and it fostered a love of books from an early age. One of my favorites is “The Phantom Tollbooth” by Norton Juster.  As a child, it surprised me how well this crazy, imaginative world could be drawn with words. Milo, the main character, is someone I identified with—kind of alone in the world as he stumbles into this fantastic, imaginary place. He returns to his regular life invigorated with a new appreciation for everything around him.

But the literary book that really changed my life was “The Moonstone” by William Wilkie Collins. It came before Sherlock Holmes (Doyle and Collins were contemporaries, however) and it’s widely credited as being the first mystery novel. The narrator talks directly to the reader, something that I had never encountered before, and it made the story seem very contemporary to me as a high schooler in the ’80s. The kicker comes at the end of the book, where the characters come back and tell their side of the story and even contradict each other. It’s a great read.

The book scene in NYC is huge, as a lot of the literary houses like Random House and Penguin are based here.  Do you think the scene in Chicago should be just as large there, both gay and straight?

When I think publishing, I think New York. So the literary scene follows. But lots of other cities like Chicago have a great scene and supportive venues. It was a coincidence that just as I began looking for places to do readings and promotions I changed jobs, so I spent the fall settling in. Now I need to get a lot more involved in what’s available for me here.

I’m a member of the Chicago Writers Association, and I’ve found a welcome reception there with Gaybash. My focus right now is on polishing my social media but my feeling is that nothing will ever replace the impact of a live reading, or meeting people face to face who’ve read your book. That’s my next step.

On top of writing you also create artwork as shown on your fantastic website.  You even donated a few pieces to Chicago House’s annual Birdhouse Art Auction.   Is art or writing a bigger passion?

First of all, what a great organization! I love what Chicago House does for people living with HIV/AIDS and it’s been an honor to donate my artwork to them. My writing and artwork complement each other. In both I guess you could say that I bring to life…what’s in my mind. It’s an amazing thing, to turn a creative thought into something physical. But when it’s finished, that ‘something physical’ no longer belongs to me, it belongs to the person who’s reading the book or viewing the artwork. The experience becomes theirs entirely.

Last year just as I was finishing up the book, I had a deadline on my Chicago House auction piece, “Home Tweet Home 2014.” Since I work full-time, the pressure was on to finish both projects well. But it wasn’t terribly stressful since I could leave all the cutting and tiles of the artwork for a while and return to writing. And then when my characters just wouldn’t do what I wanted them to do, I’d go back to the artwork and clear my head of them for a while.

Now I want to get to the book “Gaybash”.  That is a very open ended title in leading people to assume a bunch of different things.  What does Gaybash actually mean?

It was a big risk to choose that particular word. In the first half of the book, there are three separate incidents that escalate from hate speech to a full-on physical attack. All of which qualify as gaybashing. But the turning point is when Matt stands up for himself and that’s the empowering twist on the title—it’s a gay man fighting his attackers.

When I was writing the draft I thought of “Impulse” as a good alternate but ultimately this isn’t a quiet, little story so I thought a bold title fit much better. Wishful thinking, but if this gets turned into a movie I swear the audience is going to cheer when underdog Matt lands his first punch.

I know this is an Ebook now, however is this something you eventually want to turn into a hard cover or paperback?

Yes, very much so. The idea of having my book available to buy in a bookstore would be a dream come true.

But in the meantime, something has really surprised me: many people hate the ebook format! They just won’t buy an e-reader device. And I respect that—there’s something true and familiar about a printed book. That’s part of the reason I’m finishing up a trade paperback version of Gaybash, which will be ready through my website in a few weeks.

Do you want Gaybash to have a sequel and if so, do you know the premise?

I wrote Gaybash as a one-and-done novel, but I’ve had some readers ask about a sequel. Given the way our justice system has sometimes mis-served LGBT folk, there is a logical place for me to pick up the story in the near future. These characters certainly have more to say. But as of right now, I’m not writing anything related to Gaybash.

Do you think the literary world is still booming regardless of major stores like Borders shutting down?

As has often been said to indie authors, however, writing the novel is the easy part. In the absence of powerhouses like Borders, and with traditional publishers far less likely to take risks, indie authors must treat their creative work like a business and promote, promote, promote. Instead of accepting my rejection letters as Gaybash’s destiny, I chose to believe in my work, build an audience, and prove that this story deserves to be published. It’s entirely up to me—and within my control—to not take No for an answer.

Add to this the thriving independent booksellers (including one of my favorites right here in Lakeview East, Unabridged Books) and the growing interest in literary festivals among avid readers looking for fresh work, and it’s a great time to be writing.

What’s your overall take on the bear community and where can we improve?

I have a very social job that I love. But when I’m home, I disappear into my writing and artwork. So I’ll preface my answer by saying that I’ve never been to Bear Week or TBRU or even Bear Pride. If I were to go (and that’s certainly a possibility!) I’d expect to be welcomed into a frisky and fun atmosphere.

But what I can comment on is what I occasionally see on social media that is neither frisky nor fun. And that’s a bit of judgment on who counts as a bear and who doesn’t, based on endless rankings and subcategories, and who’s “bear” enough to sit at the cool table. If that’s the ticket in, I’ll pass. If you’re a big, bearded guy proud of how you look and who you are, then I’d be happy if you count me as a friend. What more in life do you need?

What are you hopeful for in 2015 and beyond?

I’m proud to live in Illinois, which enacted marriage equality through the state legislature last year. In Chicago we’re very lucky to have committed allies at the local, state, and national level who genuinely care for our community. But there are other pressing issues, largely unaddressed, that face LGBT people and LGBT people of color every day. I’m hopeful that our leaders will listen to all voices in our community and show the same passion for justice and inclusion that they showed in the fight for marriage equality.

And personally…I can’t wait to see what this new year brings. I have just a few art pieces planned, but I’m most excited about Flowercube, which was commissioned by a former professor and I’ll tweet progress pics under #flowercube. I hope Gaybash strikes a chord with readers and opens a conversation not just about the violence and hatred we face, but also the strength and perseverance we show. Beyond 2015, I can’t imagine. But whatever the future brings, I’m not afraid. At the end of Gaybash, I leave Matt in a really powerful place—he’s finally alive in his own life. And that’s exactly how I feel right now.

Want to read “Gaybash” and get to know even more about David Jay Collins?  Log on to the book’s official site and check out his Facebook page for more information.