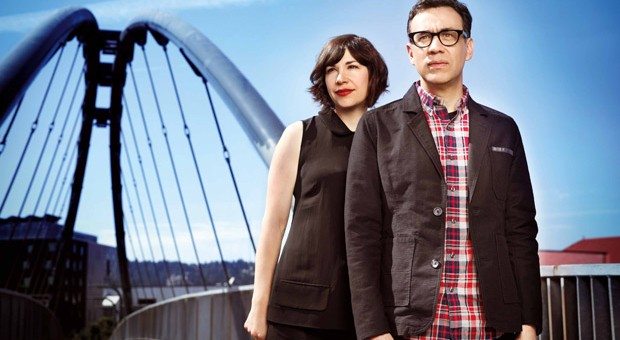 Mike normally reviews new (or recently returned) TV in an attempt to answer the question: Would I watch this again or would I recommend a friend picking up this series? However, once every week or so, the brain trust at Manhattan Digest gives him a little more free reign which he in turn uses to highlight the stuff you should check out (but probably haven’t yet).

I realize right off the bat that I am asking a lot, immediately recommending a show that comes on at 10p.m. on a Friday night, a time when most people are out and about kicking off their weekend, be it with friends, at a bar, or a party. That being said, if for some reason if you are stuck in on a Friday night (it is the middle of winter after all) or have a half hour to kill and a Netflix account or On Demand service I strongly recommend giving Portlandia a spin.

Portlandia is a sketch show that is the brainchild of Fred Armisen (Saturday Night Live) and Carrie Brownstein (of the bands Sleater-Kinney and Wild Ones). The show revolves around the hip, the hippies, and the hipsters that live in the greater Portland area. The show is currently airing it’s third season, with the first two seasons available on DVD (or on Netflix if that’s your sort of thing).

While there is a glut of sketch comedy regularly on TV between SNL, shows on Comedy Central and Adult Swim and the library of classic sketch comedy (be it Kids in the Hall, SCTV or Monty Python) that can be accessed through a variety of different means (be it DVD, YouTube, etc.), Portlandia stands out from the pack because it feels less forced, hackneyed, or reliant on pop culture than many of those similar shows.

The show’s humor comes from a number of sources. First and foremost, the show does a superb job of sending up pretentiousness, whether it’s yuppie parents who feel that their child’s life trajectory is based on getting into a choice preschool, the feminist bookstore owners whom are comically inept in running a retail establishment to the extent that they prefer donations over selling books, or people who create “art” by putting birds on various objects. Similarly, anyone whose ever had to deal with any alt-culture subgroup, be it your garden variety hipster, street punk or someone whose life choices are based off of some sense of moral superiority as opposed to actual intellectual honesty will see those contradictions ring true in many of the show’s characters.

The show’s second main form of humor comes from zany surrealism. This is often seen in a lot of the segments involving the Mayor of Portland (Kyle McLaughlin), who often dispatches Fred and Carrie (playing themselves) on various civic missions for the good of the city, whether it’s ensuring the Olympics never come to Portland, creating the city’s first major league team, or redesigning the police uniforms to give them a softer and less authoritative feel. Similarly, Portlandia has turned the wait for Sunday brunch into a post-apocalyptic wasteland where cutting the line is treated with extreme (and toasted) prejudice.

While there is no serialization inherent in the show, the show truly succeeds in creating a universe that seems as full and vibrant as a show like The Simpsons (which is known for its’ fairly large recurring cast), which is no small feat considering that the bulk of the characters are played by the duo of Brownstein and Armisen. This is critical as it means you can pick up the show at any point (as opposed to a show that runs on in-jokes and callbacks like say Frisky Dingo, or a show with a heavy serial element like Community). That being said, my recommended start point is still the pilot as it opens with one of the shows strongest sketches (The Dream of the 90’s) and really sets the tone of what you can expect throughout the rest of the series.