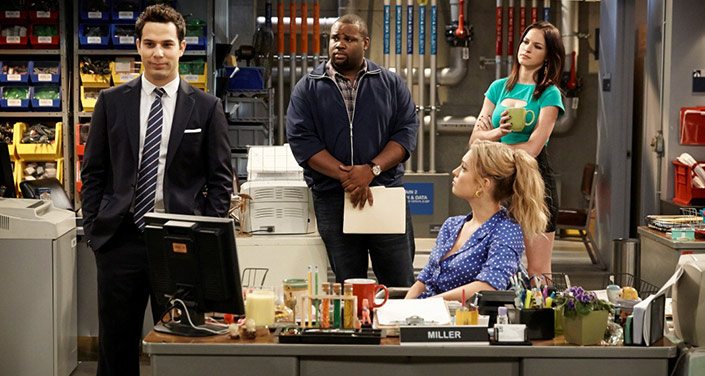 In the last few years, it’s been amazing how common the notion of the super-showrunner has been on network TV. Half of CBS’s comedies are of Chuck Lorre’s (Two and a Half Men, Mike and Molly, Mom, Big Bang Theory, and 2 Broke Girls). On Fox, we have seen the repercussions of Seth McFarlane’s reign of terror as The Cleveland Show got four seasons while live-action Dads got an inexplicable back order. This tends to be less common on cable, but I feel like TBS is slowly going down this road with Bill Lawrence (Spin City, Scrubs, Cougar Town) who not only was able to shift Cougar Town to the network but has a new show to accompany it.

Ground Floor, debuting Thursday, is at its’ core about high powered banker Brody (Skylar Austin) who discovers after a one night stand with Jennifer (Briga Heelan) that she actually works in his building on the ground floor in the maintenance staff. Brody eventually falls in love, forcing the two to navigate their complicated feelings. Along the way we meet their respective co-workers as the two try to bridge their very different worlds.

I think the first thing that needs to be said is that first impressions in comedies are often deceiving, and Ground Floor fits this adage perfectly. After a particularly forced and stifling first five minutes (pretty much everything up until the first commercial break), it slowly settles into the sort of rhythm that is familiar to fans of Bill Lawrence’s other shows and becomes a considerably stronger show. I think much of this has to do with the high amount of unpacking this pilot needs to provide in order to set up the show’s central romantic tensions (the Brody/Jen/Rory love triangle) as well as the slobs vs. snobs tensions that exist between the trust fund and the people who work in the maintenance room.

In terms of the show’s cast, John McGinley stands out in playing bank boss Mansfield, playing the chop-busting boss, while altering the character just enough that you can tell that the character isn’t just a hard expy for Percy Cox on Scrubs. Briga Heelan also comes off particularly strong as the flighty Jennifer. Skyler Astin is passable as the lead Brody, but he comes off a little uneven at points (particularly in the show’s opening) and this is unfortunate, as the other core characters in the show feel considerably more lived-in by comparison.

The real difference between Ground Floor and other Lawrence shows comes from the change from single camera to multi-camera. While for the most part it’s a fairly seemless transition, there seemed to be some hiccups as the rhythm at times is lost to the laugh track.

The Final Verdict: Ground Floor has the pieces to become a solid sitcom much like Lawrence’s other works, however, much like his other shows, there’s definitely a need for some early season tinkering. In spite of that, it’s still better than a lot of what debuted on the major networks this September and is in a time slot that’s generally pretty devoid of comedy (the 10 pm hour in general is light on comedy options now that It’s Always Sunny and The League are on Wednesdays). I would ultimately wait and see on it, but I could also see it being one of cable’s better comedies if it gets a second or third season.