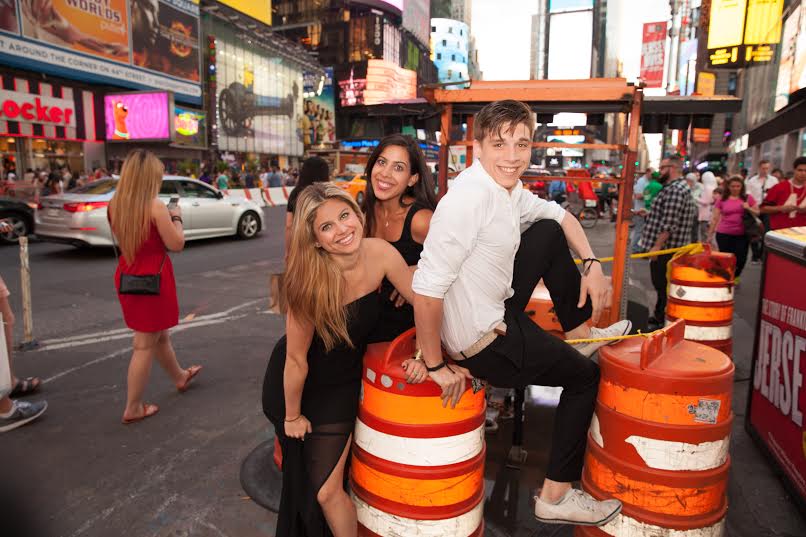 Even though I consider myself to be quite the funny person, especially my lack of dieting and amount of men I’ve been with lately at the height of my comedy/f my life mentality, it takes a lot for me to really find something out there in the universe that is really fucking funny.  Ramona falling asleep on the Real Housewives of New York City reunion?  Hilarious.  That crazy white lady pretty much asking Donald Trump to eat her baby?  Hysterical, and probably factual.  But I found something so much more funny, silly, sexy and so many more adjectives in the Under 5ers, which is a web-series about three friends just trying to make it in New York City and all the issues that 20 something’s face while being here.

The Under 5ers is Matthew Wilson, Alexandra Nader and Sami Horneff.  All three of them have an incredible background when it comes to theater and arts in general (American Musical And Dramatic Academy, London Dramatic Academy and Upright Citizens Brigade just to name a few) and that training really shows in just how incredible their comic timing and acting is in each episode.  Subway issues?  Dating issues? Job Issues?  Brooklyn?  COVERED!  And done brilliantly.  If there is a “next” in terms of what is next in comedy, these three are it.

Now they are diving deep into season two of their incredible show which just premiered on August 13th.  Lucky for me, I was able to sit down with the three of them over dinner and get to know them a little more.  They each talked to me about how this all came about, what The Under 5ers actually mean, comedy inspirations and what they are hopeful in their next steps.  Take a look!

How did you three crazy people find each other in the first place?

The short answer is that we all met in an acting class. The more interesting answer is that not only were we all in the same acting class, but we all happened to be collaborating on a musical at the same time. The musical was the brain-child of our acting coach who aimed to get a group of artists together to develop, write, and star in a show. The three of us ended up writing a good portion of the score, and, in doing such, discovered our passion for creating new material and developing our personal style of comedy. Our acting class met till 5:30pm and our musical rehearsal started at 7:00pm, so in that hour and a half, those of us involved in both would go out to dinner. With Patron, a fabulous Mexican restaurant in Hell’s Kitchen, around the corner, the three of us quickly separated from the pack and bonded over our mutual love of margaritas. At Patron, we started brainstorming ways to create our own content. We’d write ideas on napkins or dialogue on bar tab receipts. And thus, The Under 5ers was born.

For each of you, was comedy that was always something instilled in you and something you wanted to do?

Matt: Growing up in McMinnville, Oregon and being a son of a truck driver…hell yes, comedy was instilled in me. I didn’t always want to “do comedy” but comedy was always there for me.

Sami: I actually got my start in Musical Theatre, where timing is essentially everything. From there, comedy came naturally, and the more I trained, the more I discovered my passion for both writing comedy and performing in it.

Alex: “Your features are too big.” This is the comment everyone always told me in my professional life. I was a small ethnic girl with a big smile, big eyes, and an uncomfortably loud way of speaking. Comedy was and is the only field that lets me be who I am and feel proud of it.

Similarly, who were your comedy inspirations growing up?

Matt: I grew up watching and mimicking Jim Carry and his many facial expressions. Then later in life I was touched and moved by Robin Williams. The honestly he brought to his comedy was unlike any other.

Sami: Because I grew upon the stage, funny theatre woman were my inspiration. Bernadette Peters, Kristin Chenoweth, and Kerry Butler have understated comedic strength and impeccable timing- I grew up attempting to emulate that.

Alex: I could not shout Lisa Kudrow’s name loud enough. She was everything I wanted to be. She is funny, sharp, honest, and most of all- weird. She doesn’t apologize for who she is or what she does. She marches to the beat of her own drum, and that is all I can hope to do as an artist.

How did you come up with the name The Under 5ers?

People ask us this question all the time and there are multiple answers. The nice answer is that we “aim” for all of our episodes to be under 5 minutes long…but we failed at that.

So the real answer is, we all started to see a particular pattern among our friends on Facebook. They would post any and all exciting casting victories (including but not limited to first round callbacks and extra work). With these “big name TV” opportunities, many ‘likes’ would follow. “Oh my God, Tracy you got a part on Blue Bloods, we cannot wait to watch”. When we finally did, turns out Tracy was the dead body in the corner. In our industry an “Under 5” is an actor that is hired for a guest spot of less than five lines. It’s a very ‘down on your luck’ concept that we wanted to extract and input into other life scenarios outside of the acting business.

For people who don’t know about you guys, what is the web series all about?

The professional answer is: “The Under 5ers is inspired by the lives of three twenty-somethings living in New York City. It is a new web series about struggles, survivals, and hilarity along the way.” … so basically it’s a Three’s Company dynamic with Girls content. We KNOW there are a lot of shows out there about twenty-somethings not knowing who they are, and we don’t pretend to be anything but that. However, what’s unique about us is our commitment to letting our stories and our characters be as weird and honest as life is.

You are currently in the 2nd season of The Under 5ers.  Let’s take this back to the first season.  What was that experience like and what have you learned the most when it comes to developing a webseries?

The first season was an experiment- one that we are very proud of. It was a labor of love. We had absolutely no budget, no experience, and no crew, only a camera and a commitment to making something funny. We were truly shocked when we started getting recognized on the street and our peers who we looked up to kept asking when they could make a guest appearance. We knew we had something that we had to continue. Season One taught us to have confidence and conviction in our writing ability no matter what the financial obstacles were.

When it comes to developing a web series the biggest lesson we learned was consistency. It’s about being organized, scheduling meetings and sticking to them, and having back up plans even for your back up plans.

What exciting things are in the works for season 2?

Your tagline is “One city.  Three Friends.  A whole lot of problems”.  What do you think is the biggest struggle for 20 something’s in NYC and how can they alleviate that?

Figuring out who the hell you want to be. For the first time, twenty-somethings have the luxury of being what Aziz Ansari calls “emerging adults,” which means they can take the time to make mistakes and experiment with careers, relationships, and identity without fear of peril. We’re living in a revolutionary time, but with the amount of choice that we have, we’ve found it’s hard to make one.

What would you say is your biggest hope for this show going forward?

Once a week, we would get together and fashion our own writers’ room at Sami’s kitchen table. It was as close to church as the three of us would ever get. Our hope going forward is to keep collaborating and to invite other, more experienced artists into our circle. #JudeApatowPleaseLoveUs

Anything else exciting coming up with the show that you would like to add?

We don’t want to give away any spoilers, but we think our audience will be happily surprised with the direction this season will take after the first two or three episodes of exposition. We introduce re-occurring characters, and you’ll be able to see real development in the three friends as they experience the pains of growing up. As for Matt, Sami, and Alex as creators…..whelp, we’re still trying to figure that out.