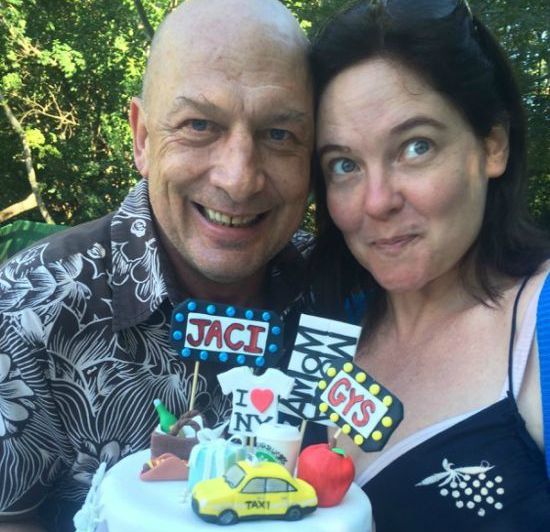 The 19th Annual New York Fringe Festival just wrapped up another successful orgy of theatre for those who didn’t leave the City for the last half of August. There were 185 shows, and while I didn’t get to more than a handful, my favorite was a one-man show called FAFI, which is a coming-of-age production about a white South African boy growing up under apartheid. The actor, Gys de Villiers, and the director, his wife Jaci de Villiers, wrote the work together, and it premiered at the festival. In their native South Africa, they are very well-known for their work on stage, TV and in film. Internationally, Gys portrayed F.W de Klerk in “Mandela: Long Walk to Freedom” opposite Idris Elba.

They have recently immigrated to New York. For New Yorkers, going to Africa would be an adventure, but they see the adventure in going the other direction. They came here about four years ago on holiday and stayed in Williamsburg in Brooklyn. They loved it and eventually, decided to try their luck here.

For those of us who have been here a while and have become a bit jaded, their enthusiasm for New York is a breath of fresh air.

Jaci explained, “Artists are respected here, and while there is a lot of very keen competition, it’s a very healthy environment for creative people.” She’s right – sometimes, we take that for granted.

They have been married 9 years, together for 13 years. They met in the theatre, and there was a professional and personal attraction. For a great many couples, working together puts you in the fast lane to divorce court, but the de Villiers are different. Gys says, “Working together increases intimacy. We come home after rehearsals or a performance and we just keep going over things.” Jaci echoes this saying, “Making the work better makes the marriage work.”

Their process is pretty straightforward. Gys says, “For FAFI, and almost all of our work, I threw loads of ideas onto paper and Jaci took that and provided a structure and added her own perspective.”

They created the backbone of FAFI while in New York four years ago, and developed the piece for the stage when they decided to move here.

They translated the piece into Afrikaans and performed a version of it two months ago in SA because the audience there knows all about the apartheid system the country had, it instructs a bit less. And it is considered controversial in some quarters.

Gys told me “Twenty years after the segregation of the races ended, there are still some people in my white Afrikaans-speaking community who believe apartheid wasn’t a bad system and that it will even make a comeback. I think its delusional to think that way, but they do, and my views challenge their identity.”

Gys was an artist back in the 1980s working at The Market Theatre known for its “Anti-Apartheid Struggle” plays, while Mandela was still in jail. Yet their work doesn’t feel like a political piece.

“FAFI is a very personal one. It’s my life story, scenes from it anyway. But in a place like South Africa was, the political is very personal in many ways,” Gys says.

Jaci points out that the brainwashing young Afrikaaners got was pretty rigorous, and it was really being drafted into the Army that had the most impact on Gys, whose attitudes about race evolved from a very conservative background.

“Yes, I was being trained to kill my fellow South Africans because they were black and that training, being property of the state like that, it sealed the deal.”

Now that they have their Green Cards (a multi-year process that required the assistance of an immigration lawyer), securing union membership and an agent are the next challenges. Gys met with one agent who said, “What am I going to do with that accent?” Well, he has a definite South African accent, and he is realistic that it will influence the roles he can get. His attitude is a pretty positive one, though, “I don’t mind being the seventh Russian on the left. I am here to work.”

And you may well see them Off-Broadway before too long. Jaci told me, “America is the land of opportunity, so we are developing a few productions of our own, FAFI is the first of several.”

In five years, they can become citizens. They look forward to being African-Americans.