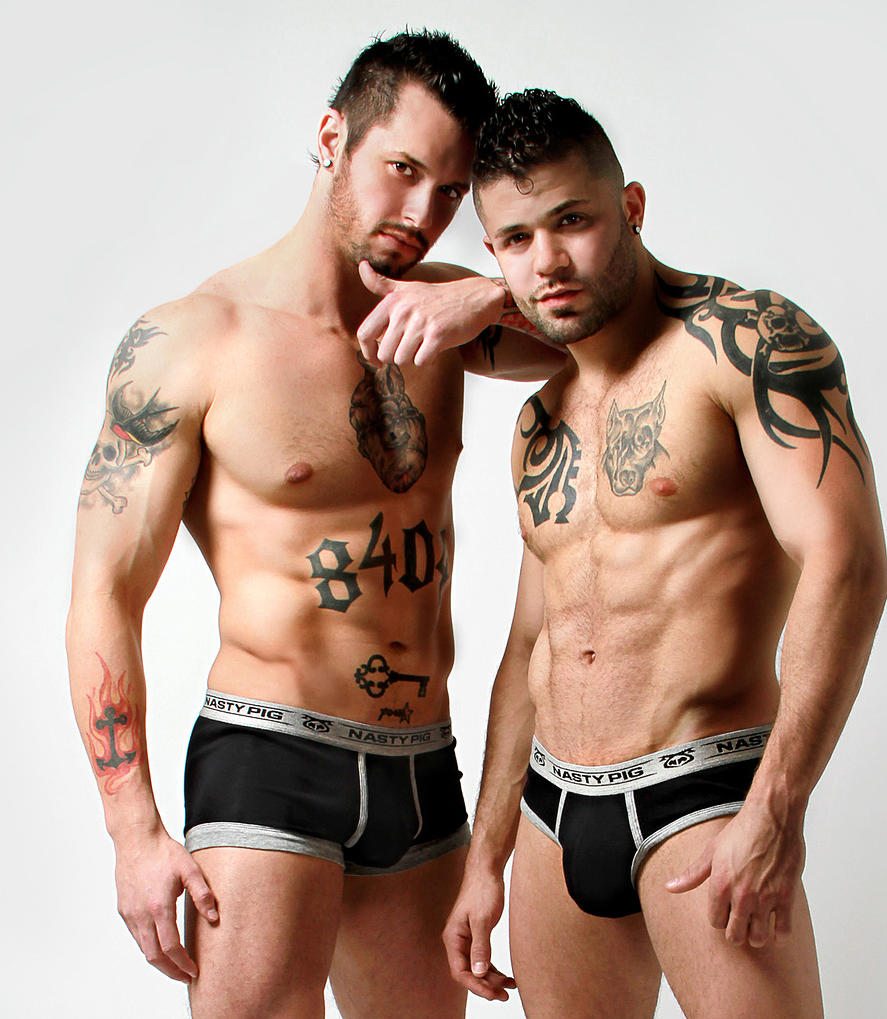 Something that I happen to love is surrounding myself with people who have enough drive and tenacity to get themselves where they need to be and not rely on everyone else to do their shit for them.  About a year and half ago I met the incredibly sexy and smart Jeffrey Wachman, who at the time met with me to discuss a book he was writing.  The former Nasty Pig model was smart, in both the book and street way and I was immediately entranced by his personality, good looks and way he discussed his life.  So when I found out recently that he launched the booming and successful Buffboyzz here in Manhattan, I knew I had to meet up with him again.

Buffboyzz is an all male revue located in the heart of Hell’s Kitchen at the trendy Bartini.  It is a two night a week event starting at 6pm on Sunday’s and Tuesday’s and can go until the later hours in the evening.  They also have a separate event for Long Islander’s out in a place called Show World located 45 minutes out of New York City in West Babylon, as well as a new event starting on September 8th at the popular Stonewall Inn on Christopher Street. With the franchise of Buffboyzz increasing at a skyrocketing pace, I got the chance to sit down with Jeffrey and his partner John Greco to discuss said success and what you as a customer can expect upon arrival.  Take a look.

So tell me how the concept of Buffboyzz started?

John– Buffboyzz started in July of 2005.  I started it that year after the Gaiety Theater closed which was a male strip club in Manhattan.  They used to do all nude male dancers seven days a week, it was like the shrine of male strip clubs in New York for some time.  As many of you know, they cleaned up Times Square and knocked the building down and that place was history.  With that I started a party in the Lower East Side at this place called Thirteen Little Devils on Archer Street on a Sunday.  Had about 15 guys that would dance that day.  From there, we went over to Stonewall Inn for a couple of weeks, and then we wound up doing Sunday’s at this place called Heaven if any of your readers remember that.  It was on 16th Street and 6th Avenue, and we were there for quite some time.

From there I was called to Florida, and I went down there for a year and a half.  I co-managed a local strip club down there which wound up closing in 2008.  I then came back to New York and started doing a place called Show World out in Long Island on Sundays.  From there I hooked up with Jeff a little more than a year ago.

Jeff- Actually me and my husband were searching around for shows in New York City, a place to have a good time and hang out with the boys.   John said, “You know you guys should come here and work, instead of spending money you can make money”.   So I took him up on the offer, did it and made a lot of money.  Dancing really isn’t my thing though.  I’m such a business minded person that if I am going to dance, I am going to create a job for 100 dancers that is much bigger than me just dancing.

Jeff- It was never a question for me of whether I could’ve done it, it was just that at that moment in time I had so much going on for me outside of what he wanted to do.  From the club I was running. the book that I’ve written, and the store I was managing with my brother I was spreading myself way too thin. At that time too I had just gotten married to my husband and had probably saw my husband only four months out of that entire year.  So when he approached me about doing a party, and some initial resistance, I finally caved in and said “Let’s give this a shot”.  Then I said “Let’s do this on a night where there is nothing going on in New York City”.  I said we are going to take Tuesday nights and did it first at Bartini in Hell’s Kitchen.

The party was going really well, we were almost hitting the 100 person mark in our first couple of months of doing this.  After some internal problems at Bartini we moved to a club called Secrets on 29th and 10th.  It was such a desolate and quiet area that we were lucky to maintain what we were doing, but it was also fueled by the fact that I know that me and John could get this done.  We kept on moving, even with the outside voices saying “You guys are crazy, this isn’t going to work, etc.”  We started seeing the numbers coming back and then out of the blue the owners sold Secrets.  The new owners at Bartini’s called us and asked us to come back to the original location, which we agreed and figured it was meant to be.   After the continued success of Tuesday’s we decided to move ahead and do Sunday’s on top of that at Bartini just to see how it would go.

John- So we basically had two shows going at the same time in two different markets.  We had Tuesdays/Sundays at Bartini in New York City and then for the Long Island folk we were still running that party Sunday’s at Show World.

Jeff- We realized that doing Sunday’s party we were able to produce consistent numbers like that, regardless of extenuating circumstances like weather and what not.  We had a rainy Sunday three weeks ago and made more money that day than we did all month.

John- What New York needs now is a gay owned, male strip company every night of the week someplace.  Both of us are gay, and I feel like gay owned and gay operated we got our company.

100-150 people that fast at Buffboyzz is pretty fast given the turnaround rate here in New York City.  How were you able to do that?

Jeff- John has an email list that he has built for the past couple of years now, and some of the people were dancing twenty-thirty years ago.  He is able to bring an older clientele whereas I am able to bring this whole new blood situation to the table where the bars are happy with the outcome, the dancers are happy with the outcome, and in turn with both of them happy it then makes ourselves happy.  We have always established a relationship with the bar where we have to make sure they are happy, otherwise it isn’t going to work.  So with the two different followings we have created something good.  However, it is nowhere near where we want it to be, we are just making headway in this game.

John- Plus what we do that no one else does in Manhattan is we start early at 6PM.  I always believed that when I worked at the other venues that there is a whole population in Manhattan that everyone forgets.   Whether it is the older and married gentlemen or whatnot, I literally say in my emails “We are going to get you home by the 11 O’Clock news”.  So the earlier crowd is going to come in, have a great time, and by 9 or 10 o’clock they are going to go home and then here comes to new wave of people.  The second shit per se.  At 11pm the line is out the door, its insane.

Jeff- It has gotten to the point that even at 2am where we are supposed to be done we are having to keep it open later and later as people are still coming in beyond that time.  Which is a longer shift, but it means we are progressing.

So basically what you are saying is that it is a combination of social media presence mixed with old and new school principles?

Jeff-  Pretty much yeah.  We are building our brand basically on customer satisfaction and to not feel like you are being swindled by whatever dancer you are with.  I have had dancers that have seen customers get too drunk and will stop what they are doing to make sure they get a cab and get home safely.  This is the place to come to to really enjoy yourself and not worry about your wallet being taken advantage of.

What is the per dance rate here for all of our viewers?

What is the process of picking your men for the customers to enjoy?

John-  They can find us and whatnot, but what we are looking for ultimately is masculine dancers.  That is what we want and what our clientele is looking for.

Jeff- There is a variety of body types and ethnic backgrounds, and of course good looking is a must as that is what they are going to pay to see.  I’ve been to places before where guys legit look like they swallowed the juice, not even injected it.  I love the big guys and I love the small guys, I just love guys.  So to me it is important to have variety when it comes to running an establishment like this.

John- And when it comes to finding that diamond in the rough, you would be surprised at the men who are making the most money here.  It isn’t always the big muscle guys.  You can be the hottest guy in the city with the hottest body.  However if you have a bad attitude however you aren’t going to get away with it for that long.  So if you look a certain way and are good to your customers with the right mind frame, you can go far in something like this.

What are you guys ultimately hopeful for with the Buffboyzz future?

Jeff- Seven days a week in New York and a much bigger place.  We are also opening in Midtown and Chelsea this month, so be on the lookout for that as well!

To find out more information about Buffboyzz check out the official website!  Best of luck to John & Jeff in the future!