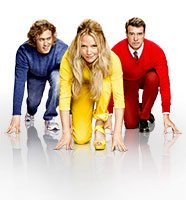 The Goodwin Games: Mondays at 8:30 Eastern on FOX

With this week’s final string of season finales on ABC (notably Dancing with the Stars and Modern Family), it is safe to say that we are headed into that vast television wasteland known as the summer season. Acting under the assumption that people are less likely to stay home and watch TV when it’s nice out (and can you blame them?) our benevolent overlords at the big four use this time to bury their cheapest shows and test out what they feel are unproven entities (though admittedly two little comedies you may not have heard of called The Office and Parks and Recreation both had short late spring-early summer seasons). FOX in particular seems to be fond of stretching the TV year (it doesn’t hurt that it has fewer prime-time slots than its’ major network competition) and continues that experiment tonight with it’s newest show, The Goodwin Games.

The Goodwin Games is built around the story of three siblings whom reconvene after the death of their father, only to discover that he had a secret $20 million dollar fortune in his estate. However, their father (played in the pilot by Beau Bridges) has a twist: feeling like he’s made some errors in parenting over the span of his kids’ lives, he has created a number of hoops for his three children to jump through in order to get a piece of the estate.

We open with the passing of Ben (played by Beau Bridges) who died literally moments after finishing his elaborate video will and the reactions of his three children: Smug surgeon Henry (Scott Foley), vain actress Chloe (Becky Newton), and kleptomaniac Jimmy (J.T. Miller). They reunite at the funeral where they run into Henry’s-ex Lucinda. They then are summoned to April (Gabriella Tsang), his executor’s office, where they are introduced to “the game”.

Each key character then splits off, dealing with unsavory remnants of their past, including April and Chloe’s falling out, Henry and Lucinda running into each other at the bar, and Jimmy’s daughter, whom knows everything about Jimmy’s troubles. The next morning they return to the office, only to find out that they are forced to play a game of Trivial Pursuit, where the topics all revolve around their lives, and are introduced to a wild-card named Elijah. After the game ends in an argument, they return to April to find out that Elijah gets a cool million, the kids get 50 bucks, and the rest was being given somewhere else. The kids ultimately go their separate ways, until Chloe makes them play a game of Trivial Pursuit in the bar, only to find that the next step of the game requires them all to move home.

As with most sitcoms, you often have to view shows not only through the lens of a pilot, but what the show could be. Sitcom pilots are often faced to bear the burden of establishing most of the conceit, and the game concept is clearly a very heavy one (the pilots leans very hard on this). However, I could see it’s later episodes not leaning on the game conceit nearly as hard, especially now that the heavy lifting of bringing the three disparate characters together has been done.

When you get to those moments in between the conceit, you get a pretty solid mixture of funny (especially in the flashback cutaways that were commonplace through the pilot) and heartwarming (Jimmy’s relationship with his daughter). Miller in particular steals his scenes as Jimmy, whether through his lack of understanding of subtext and sarcasm, or his apparently chronic kleptomania (he steals April’s pen twice but only gets caught once). Unfortunately, those moments seem cramped tonight (I wonder if they had to shave minutes from the original pilot to get it to fit into 22 minutes for tonight’s premiere), but could increase over time, since most sitcoms tend to lean less on their conceptual structure as time wears on.

Visually and tonally, the show is very much how one would envision a single-camera How I Met Your Mother, which makes complete sense given both shows being created by Carter Bays and Craig Thomas.

The Final Verdict: The Goodwin Games is a fairly refreshing new show to have during a time of the year where television offerings tend to be lacking. While it tends to lean very heavily on its’ conceit in the pilot (as many pilots do), you can see the potential of the show in the very human moments where its’ characters interact. My one fear is that with the very short season order (six episodes) on a network that traditionally has been very quick pulling the plug on struggling shows (FOX) that it may be doomed before it ever gets off the ground (especially since it takes about a half a season before many sitcoms hit their groove. I do recommend checking this one out though if you like How I Met Your Mother as they share the same broad and occasionally bawdy humor.