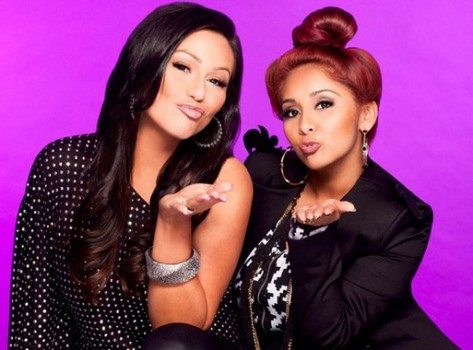 Nicole “Snooki” Polizzi and Jenni “JWOWW” Farley are best known as MTV’s “Jersey Shore” superstars. Last night they were hosts at the premiere party for the fifth season of “Rupaul’s Drag Race”, taking place at Club XL in the heart of Times Square.

They were looking their finest last night when I introduced myself. Dressed like Hollywood Starlets they stole the show with their appearance. As we gathered together for our interview they thought they recognized me, to which I replied “Nope, first time for both”. Snooki replied- “You got a twin out there somewhere”. I don’t really know if there can be two Ryan Shea’s in this world, that might be too much for people to handle. This was a brief interview where we focused questions around hosting an event for the LGBT and how the LGBT cause rings true in their own lives.

It turns out JWOWW and I have more in common than our good looks and large breasts.
We are both from Long Island, JWOWW reps Franklin Square, I rep East Northport.

What is your favorite restaurant is on the island?
JWOWW replied “Easton”. Never heard of it before but thats not a surprise seeing as she is a Nassau County girl. JWOWW’s eyes lit up as I told her my restaurant, in all of the other hemisphere / Long Island, is “All American Burger” in Massapequa. JWOWW then informed me that “All American Burger” is both “the place you can get a to go burger” and simultaneously “get a white girl wasted”. I will remember that one girl!

“We just love that we are just so much more mature than a lot of people.”
Snooki replied, as I asked both girls if either were aware as to how famous they had gotten from the show. Jenni simply shook her head and said “No”. as Snooki continued “We get a lot of hate, and the fact that fans support us, look up to us and tell us that we don’t really care what people say about you makes us feel good.”

Snooki and JWOWW deal with bullying on daily basis.

They choose do continue being themselves because “their fans support them and because of who they are as women”.  They have been longtime supporters of the LGBT community but rose to prominence in this community after they posed for the cover of Next Magazine.

“We want to make this community acceptable around the world, not just in cities like New York and Los Angeles”. “We want to scream it through the rooftops that this is a great community, and you have to accept it”.

Snooki brought up some personal relationships, “I have three best friends I go to- Brad, Joey and Derrick. They are all gay and fabulous”. We then talk about how it’s essential to have a gay friend as we will tell you the outfit you are wearing doesn’t look great as opposed to you buying something and us lying to you about it. That’s what friends are for.

When I asked what their future plans are, JWOWW hopes for a season three of Snooki & JWOWW, where as Snooki simply says, “I want her to get pregnant” while looking at JWOWW.

As the briefinterview winded down I left with a positive impression of both ladies, that they genuinely had altruistic reasons to support at an event like this. They are using their celebrity for the better and I think they are doing a damn good job at it!