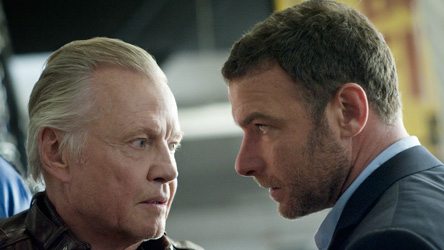 We are currently in a year of transition for our prestige networks. As many of televisions best dramas (Breaking Bad, Dexter, Mad Men) are in either their final or penultimate seasons, we are also seeing signs of rebirth for a new crop of dramas all over the dial aiming to take their place in the public eye (Hannibal and The Americans have been 2013’s best so far). This is particularly an issue for Showtime, for whom Dexter is truly the centerpiece of their Sunday night portfolio and the networks most recognizable show (with only Homeland as the other Showtime show on most people’s radars). As a result, one can only imagine that Showtime hopes that Ray Donovan will fascinate the audience enough of its’ lead in to keep eyes glued in a post-Dexter landscape.

Ray Donovan is built around its’ titular character (as played by Liev Schrieber). Donovan is a “fixer”, a modern day Winston Wolfe who’s primary responsibility is to make the problems of Hollywood’s rich and famous just “go away”. However, things are made more complicated when his father, Mickey (John Voight) is released from prison, as Ray has tried to keep his past concealed and that’s going to be a lot harder to do with his father around town.

Our pilot starts with the release of Mickey Donovan, whose been incarcerated in the outskirts of Boston. Within minutes of his release he has shown up in a nearby church to kill a nameless priest. We then cut to the suburbs of Los Angeles, where Ray receives some calls that amount to just another day at the office for him: An athlete wakes up with a dead girl in his bed and an action star with a big action flick out soon gets caught soliciting a transvestite that will kill his big opening. Ray’s solution? Put the prostitute solicitor in the same room as the dead girl and plant the story. At that point Ray gets another call from a man who wants him to investigate his paramour, Ashley: a twenty-something pop star and former child star, an awkward proposition when he discovers she has feelings for him. Afterwards, he is dispatched to bail his brother Bunchy out of jail, only to have the bombshell of his new half brother dropped upon him.

The next morning, he showed up at Ezra’s wife’s memorial only to find out that Mickey is en route to Los Angeles and that Ezra is suddenly guilt stricken. Additionally, Ray comes home to find Ashley in the house with his wife having a few drinks. Ray drives her home, but an awkward conversation with ends with her attempting another unsolicited move on Ray. At this point, his wife is angry, and makes him scuttle off to his penthouse in town where he gets wasted and gets haunted by his starlet problem and his father before falling asleep.

Ray returns home to his wife, who confronts him about everything: a possible tryst with the Ashley, trying to get his kids into an exclusive public school, and leaving “the valley”. He gets to the party, where Abby starts pushing Stu about Marlboro, only for Stu to once again make the claim that Ray slept with Ashley. Ray then goes to the gum only to find out about the man Mickey murdered (the priest who molested Bunchy) and fly into a rage when Mickey asks about his grandchildren.

So will this show reach the prestige that Showtime hopes it will hit? While it shows flashes of potential, it falls way short of those standards. Much of this, I think has to do with the writing of our pilot. While Ray is portrayed as a complicated and messed up guy, and Mickey alternates regularly between affable guy with a second take of life and completely evil overlord, many of the shows other characters are glossed over or note. This is fairly egregious with Abby, who tends to be written entirely like a harpy (95 percent of her lines involve her complaining that they are merely living a comfortable upper middle class existence and not obscenely rich) and an obstacle than a loving wife. Ashley runs into a similar problem, as she literally is written to dive in on Ray at the drop of a hat, drinks her way through epilepsy and generally puts Ray in bad positions.

A second issue with the writing was the insistence on putting a ton of unrelated twists and turns into a pilot that clearly was meant to come off as the prologue for the rest of the series. As an example, the reveal of Daryll being Mickey’s illegitimate son could easily have been scuttled off until the second episode (especially since it’s the only scene the character appears in, and he’s there as a background character). One runs into the same problem in other places, as the show tries to cram a large number of story lines into a mere 44 minute show.

The acting is generally pretty solid, though it’s always apparent that Schrieber, who plays the titular character seems to act circles around everyone else, though that may be in part due to the fact that Ray is allowed to drop his Boston accent, whereas the other Donovans are held to almost comically stereotypical accents. Jon Voight seems to work well as Mickey, and the scene where he and Schreiber finally meet made for some gripping television.

The Final Verdict: This is the sort of show that has so much potential in it’s premise: everyone wants to see the fixer work his magic – it’s in those moments of levity that Ray Donovan shines. However, the show tries so hard to be Mad Men and The Sopranos with a little Pulp Fiction sprinkled in that the show turns into an overcrowded mess as the writers’ shoehorn all of these elements in. This is one of the few dramas that feels like a wait and see proposition: the pieces are there (and they are excellent pieces), however it will mean nothing if they never come together to make a coherent whole.