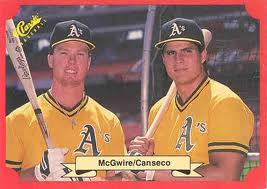 Essentially many believe this to be true. While “Big Mac” and “Slammin’ Sammy” were ending the century hitting 60+ home runs ole’ Jose Canseco was being shopped around like a sham wow last Christmas. Canseco would land on 4 teams in the last 4 years of the 90s Boston, Oakland, Toronto and Tampa Bay respectively. Although his numbers had been down since his earlier years and were not on the level of McGwire’s his home run totals were still very respectable

Many wouldn’t like to believe this but he still had another year to 3 left in the tank, maybe not the same power he once had but he still could have been serviceable. (Mind you this was all before the steroid revelations that would occur in the middle of the previous decade 2004-2006). If Jose would of stayed on for 3 maybe 2 more years he would of hit his 500th home run thus enshrining him into the hall of fame in Cooperstown. He wasn’t commanding much of a salary and had accepted his newfound role as a “role player”. Being a bench player, pinch hitting, mentoring younger players and being a good clubhouse guy. All this started in his short stop in the Bronx in 2000 when he teamed up with the Yankees to help them win their 26th World Series championship.

Well then why was it that a still productive, cheap and more calm Jose Canseco was out of the game in his mid 30’s ? We may have to look outside of baseball for that. He at the time had 3 times convicted of spousal abuse and domestic violence for either hitting his wife or girlfriend. He also had assault charges and violence within nightclubs or bar settings. Also within the “lines” GM’s and managers also weren’t convinced that he would be a good fit in their club house. Stemming from his past off the field issues, to his on the field antics and club house problems. So when he left the game never to receive another major league offer again he held a grudge, a grudge that changed the foundation of sports forever. He would join on some minor league squads never really getting a legit shot, when he gave up on his dream to return he In 2005, admitted to using anabolic steroids in a tell-all book “Juiced” . He also would claim that up to 85% of all MLB were or had been taking steroids a number that is disputed by many in the game. Jose Canseco is also credited with starting numerous baseball players on steroids.

In the book, Canseco specifically identified former teammates Mark McGwire, Rafael Palmeiro, Jason Giambi, Iván Rodríguez and Juan González as fellow steroid users, and claimed that he injected them. Most of the players named in the book initially denied steroid use, though Giambi admitted to steroid use in testimony before a grand jury , while Palmerio acutally tested positive for PEDs after telling but more recognizibly pointing his finger towards the members of capitol hill during testimony, he stated that he had never taken anything before.

In late December of 2007 Canseco had reached a deal for his sequel to his first book Juiced called Vindicated. The book would hit stores by Opening Day 2008. This book is said to have “stuff” on Alex Rodriguez, and Albert Belle. The book will be a “clarification” of names that shouldn’t been mentioned in the Mitchell Report. Many denied the claims but however, on February 7, 2009, Sports Illustrated reported that A-Rod did test positive during his 2003 season, which could make Canseco’s book seem more real than it was believed. Finally, on Monday, February 9, 2009 A-Rod confirmed Canseco’s previous allegations of steroids use in an exclusive interview; A-Rod admits to using steroids from 2001 to 2003. Rodriguez however denied the allegations written in Canseco’s book that Canseco introduced him to a steroid deal calling that information “100% false”. He also has had interviews, statements and blogs giving out more information and stating that his info is true, and to this point it has been. All of the denials that were false have been backed by Mr. Canseco.

Since his departure from baseball he had been on numerous early and late night television shows. The Surreal Life he has also been a boxer and K1 fighter. This is what the man is now doing for money prostituting himself for who ever will buy. He also know pushes what he “takes” for his muscular size and strength. McGwire is now back in baseball first as the hitting coach for the St. Louis Cardinals and now the LA Dodger, he is now profiting during his life after his playing days Canseco is not and probably will not. The past hall of fame vote really was the first with the post PED era, and no one was elected. People found this to be a shame , a disgrace and overall an in justice. Those people must not realize that cheating is not right and not apart of the American past time, but either way the MLB turned their back on Jose and he made them pay.