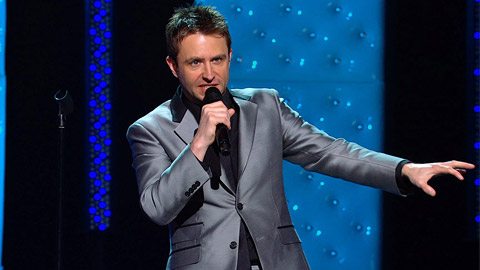 @Midnight: Monday to Thursday at Midnight on Comedy Central

One of the most surprising and underlying stories of the last year or so has been the resurrection of Chris Hardwick’s career. Hardwick, who once had the task of being the “other guy” next to Jenny McCarthy and Carmen Electra on MTV’s dating show Singled Out. After Singled Out ended, Hardwick seemed to disappear, becoming a footnote in the pop culture landscape. However, in 2011 the older, wiser, and more openly geeky Hardwick started the Nerdist podcast network, which has become one of new media’s larger conglomerates and in many ways is becoming the face of pop-culture geekery. From there he launched Talking Dead last year, a post game show for AMC’s hit The Walking Dead (and already spun off at least once as a Breaking Bad post game show). Needless to say, now the face of new media, Hardwick is now in demand, with Comedy Central being the newest network to call on his services with his new late night show @Midnight.

@Midnight in a lot of ways brings Hardwick full circle. If Singled Out was an irreverent take on dating that happened to be structured like a game show, @Midnight is an irreverent take on social media that happens to be structured like a game show. Part Tosh.O, part Whose Line, and part Around the Horn, Hardwick’s show takes three stand-up comedians and lets them tee off on the day in social media with Hardwick awarding points for particularly funny or unfunny lines with the winner being proclaimed “the funniest person for the next 23 ½ hours”. The show also benefits from having two of the best lead ins a show can have for a midnight air-time in the form of Comedy Central’s late night tandem of The Daily Show and Colbert Report.

In a lot of ways, the grading rubric for a show of this variety tends to boil down to: is it funny? Well if you like the panel segments of The Jeselnik Offensive, you’ll probably enjoy this, as it’s full of rapid fire ripping on the “best” of the internet (the infamous “Chinese Food” video gets particularly ripped on tonight). The show also doesn’t hesitate to plunge the depths of the internet for its’ humor, going well beyond celebrities on twitter and ripping on Tumblr, Etsy, and even OKCupid (the “this or that” style games such as Etsy or Porn? and Serial Killer or OKCupid? are show highlights), so there’s an added comedic bonus based on exactly how much web-based content you consume.

The secret strength of @Midnight lies in its’ deep guest roster, which tonight brought in the who’s who of the comedy podcast scene (Kumail Nanjiani, Natasha Leggero, and Doug Benson), as the improv-heavy nature of the show (it does follow the tropes of a game show after all) seems to mesh well with veterans of the free-wheeling podcast format. The looseness of it’s game show style premise also ensures that we’ll often see multiple takes on jump-in questions, and it seems that the rule of funny will often take precedence over any sort of hard rules of a given mini-game (albeit not quite to Whose Line? levels, as here the points do matter). Conversely, its’ often at the point where it plays the game show premise straighter (mostly in the first segment where the show focuses its’ emphasis on recalling the day in social media) that it tends to lag a little.

A large part of the show’s success has to go to Hardwick, who as emcee keeps the pacing of the show as quick as reasonably possible, while maintaining a fairly loose atmosphere and kept the whole thing from going off the rails. While the format itself can use some tweaking (audience response to each of the sub-games will help drive this and it will likely emerge over the course of a few weeks, and the random elimination at 25 minutes leading to the Final Jeopardy-esque FTW round seemed fairly out-of-place), there’s enough good in the “comedians stuck in competition to massage their ego” premise to keep the general format over that of say, a Jeselnik Offensive style talk show.

The Final Verdict: @Midnight successfully mashes up a variety of established formats in order to make a lighthearted late-night complement to the more hard news oriented humor of The Daily Show and The Colbert Report. While all the pieces are not perfectly in place, the show manages to find enough ways to set up its’ guests on slam dunk style jokes that you will laugh more often than not. Check it out if you’re stuck with insomnia or looking for some new late-night TV as there’s not a ton that you could recommend over it in those situations (except for some of the stuff Adult Swim throws up on it’s Thursday live-action lineup).