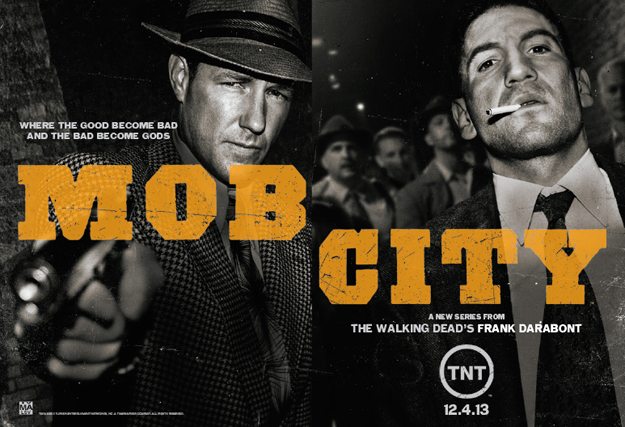 As we slowly march through December interseason (it isn’t fall, but mid-season hasn’t kicked in yet either), we tend to stumble upon the shortest of new series, often running six episodes or less multiple times a week (more on another of those “event” shows next week). Often these shows run either as a teaser for a full series, though often they exist because they fit the network’s holiday schedule better than running two new weeks of regular prime-time over a period where pre-emptions can be found all over the dial. TNT, however, is taking the opportunity to instead go big, placing a premiere mini-series in the course of the two weeks before Christmas from a big-name showrunner with some top notch guest stars.

Mob City is the brainchild of Frank Darabont, former showrunner of The Walking Dead and is a noir-style show set in the mid-20th century oasis of LA. Here, an embattled and corrupt police force must square off against Bugsy Siegel’s (Ed Burns) infamous mob group. However, Captain Frank Walker (Neal McDonough) is trying to shine as a beacon of light in the department, ridding it of corruption while making the fight against organized crime his own. The whole story is told through the eyes of Jeff Teague.

Visually, Mob City is very lush, with the sort of cinematic feel that the best of television now provides. In addition to its’ striking visual scenery, the show doesn’t hesitate to bring that same quality to the foreground, as the show does not hesitate to bring the effects to the forefront, including one cool shot where a failing underling is blown straight through the back wall of his church confessional. The more intricate scenes are also slickly shot, as shown in both the opening firefight of the pilot, and the climactic showdown at the end of the pilot.

Unfortunately, while the show is stylistically amazing, the underlying skeleton is weak. The show’s focal point, the detective Jeff Teague is incredibly boring, even by the stoic noir-lead standards. We spend the bulk of the first two episodes circling around the same points (in what had to indicate a burn-off, we see Necky tell a story about Mickey Cohen’s origins only to see the same exact story visualized in the open of the second episode—with maybe 10 minutes of real time passing between the two). The end result is a show that feels incredibly empty at points while belaboring a mystery that we already know about while failing to develop any other real plot lines to accompany it.

The Final Verdict: Mob City creates a wonderful playground and is a grandiose exercise in world building, but it’s all squandered on a slow moving story with not particularly well flashed out characters (in particular, it’s lead). The end result is the sort of show that seems ideal in the background, with one only really focusing on the TV when the guns come out. I’d skip this one, normally this would be the sort of show I’d call wait and see on (because it’s not necessarily bad), but with a six episode run, the lack of any urgency is alarming, and there’s minimal hope a third of the way in that the show is going to improve it’s structural issues.