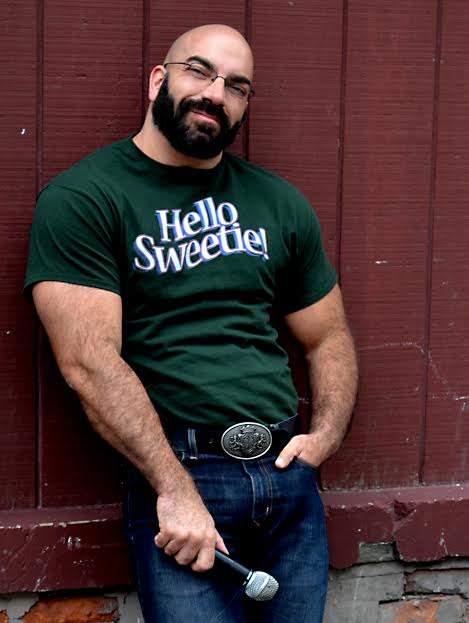 Funny can come in all different shapes and sizes, but not often do we find someone of a particular physique and stature do it so well as my buddy Peter Bisuito, AKA “My Big Funny Peter” does.  Peter, who resides in upstate New York, has developed quite the following for himself in recent years as his stand up gigs become bigger and bigger.   I met this brooding & tall drink of muscle water over the summer at Provincetown’s epic Bear Week, in which he was one of the highlighted performances. As someone who has a bit of an intimidation factor when it comes to muscle bears, Peter couldn’t have been any more of the opposite.  He was kind, sweet and funny all at the same time besides being quite the eye catcher if I may say so myself.  After meeting him at Bear Week I wanted to get to know him more and most importantly how he decided to make people laugh more than just a hobby.

Peter sits down and discusses with me how he got into the industry, what makes him laugh the most, how his Bear Week experience was and what the future holds for him and My Big Funny Peter.  Take a look.

Hey Peter! So how did you get started in the comedy world in the first place?

I’ve been a performer since I was a teen-ager but its been all theater. I started as a dancer in musical theater 25 years and 90 pounds ago. Comedy is something I’ve wanted to try all my life but never had the courage to do so. But in January 2011 I hosted an awards banquet for a local theater company and asked them if I could try a bit of stand up before the ceremony. They said yes. So I wrote a 20-minute set and killed it! The audience loved me and I decided from that point on I was going to pursue comedy.

Who would you say are some of your influences that helped you along the way?

Definitely my husband, Mark. He was so impressed with my comedy he actually encouraged me to quit my job and give up my income to purse comedy full-time.

Is your comedy based strictly on LGBT material or does it go outside the grain of that?

Oh God no. LGBT is only a fraction of what I do. Many of my audiences are predominately straight. I only perform in front of all gay audiences whenever I’m hired to host or headline an all-gay event.  My comedy appeals to everybody. Gay, straight, young, old etc.

So many things make me laugh. I truly laugh all throughout the day. Whether it’s something cute and funny my dog did, or something I heard on TV. Or even something stupid that I did like trip over the end table or drop something in the toilet. I was on the couch one day watching TV and I farted so loud it scared the cat. She jumped off the couch and ran into the basement. That right there made me laugh for a good 17 days straight! And yes of course I use all of this in my act because I figure, if it made me laugh, it will certainly make an entire audience laugh!!

You obviously have a fantastic physique. Do you think aesthetic plays a huge part of being successful in the gay world?

Truthfully when I started comedy, everybody and their mother told me I would sell-out every show because of my muscular body. I have come to realize over the past few years that the way I look actually works against me. People are not used to seeing a big beefy bodybuilding comedian. People fear the unknown so when they see me they say to themselves, “Wait a minute. A big muscular comedian?? There’s no way this guy can be funny.” Especially in the gay community. If I had a dollar for every time a gay man said to me, “Are you going to perform naked?” I have a very difficult time convincing people that I’m a legitimate funny comedian. Just because I’m in shape doesn’t make my life easy. I continue to claw and scratch for every ticket I sell.

I met you over the summer at the infamous Bear Week in Provincetown. Was that your first or have you gone before? What was your show like?

Bear Week 2014 was my 3rd time performing there. All my shows have been well received with lots of laughter and love from the audience. However, all 3 years I was about 5 or 6 tickets short of a sell-out. I’ll be back for 2015 so hopefully this will be my very first year that I will see that SOLD OUT sign across my poster!!

Seeing as you are part of the bear community where do you think we can improve on overall to make us more unified?

Actually I think the Bear community has done an amazing job at being unified. There is a whole Bear movement going on right now. We are the shit baby! There are Bear events going on all over the world!! And the nice thing about the Bear events is that we are all accepting. We truly welcome anybody whether they are Bears or not. That’s why most Bear events promote themselves not only to Bears, but to “Bear Admirers.”  Can you believe it?? We are ADMIRED!! I think people love the Bears because we are always so happy and down-to-earth. And I think the reason for that is because Bears aren’t hungry! No need to be bitchy when you’re well fed!

Do you think there is enough representation of gay comedians in the mainstream media?

Hmm, I don’t really really have an opinion on this. I’ll have to think about it and give you my answer during my next interview!! J

You are based in upstate NY however if the opportunity strikes would you ever consider relocating?

Oh come on! Who wouldn’t want to live in BUFFALO for the rest of their lives??  Ha. Actually the only reason why I live in Buffalo is because my husband has a good steady job here. He’s been working there for 26 years. If he found a job elsewhere we’d move immediately. Buffalo is a great city but sometimes I feel life is passing us by. However I will say my husband always tells me that if opportunity knocks, he would want me to go. Mark and I have been together for 12 wonderful years. We love each other more now than we did when we first met. Our love continues to grow with each passing year. He wouldn’t want me to miss any opportunity no matter what. So just because I live in the big flashy and exciting city of Buffalo, doesn’t mean I would pass any opportunity that came my way.

Now that 2015 is here, what are the next steps career wise for you?

I’d really like to get an agent and/or business manager. I have the talent but I just don’t have the contacts. I think an agent would really help but unfortunately I don’t even know where to start looking for one. I’m also very excited about this awesome project I’m working on. I’m developing my own YouTube web series called Exposing Peter. It’s a show based on my comedy. There will be reality moments, scripted moments, sit-com moments. There will also be funny cooking, travel and workout segments. I already have 2 episodes complete. I’m working on a few more and I hope to make my series premiere in February or March 2015 with a new episode every month.  I’m so excited at the DOZENS of viewers I’ll be getting!! So STAY TUNED!!

Well, I guess this is where I get a bit sentimental on your asses. I grew up extremely closeted. I thought the entire world hated me because I was gay. It caused horrible self-esteem issues. So I would make people laugh to gain their acceptance. It’s become a way of life for me. However, I got a very late start.  I always wanted to make my living as a performer but my life just didn’t go in that direction.  It was only 2 years ago when I decided to give up my life and my income in order to purse comedy and entertaining full-time. I put myself on food-stamps and Medicade and now I feel like I’m trying to catch up for 25 lost years! I spend every minute of my life thinking of ways to make people laugh. I want to be as successful as I can but I don’t want to wait until I’m 65. In other words, I don’t want to be Estelle Getty!  So all I ask is that people share my videos, tell all your friends and follow me on social media.

Want to know more about Peter?  Log on to his official site.