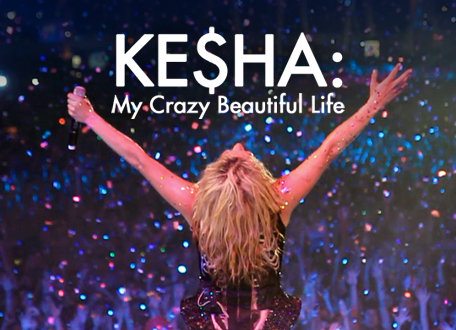 In the world of female pop starlets, there always seem to be specific brands that stars seem to hew to. Katy Perry always seems to be somewhat infantilized and stuck in a state of arrested development. Rihanna has often put a sadomasochistic image at the forefront of her brand (and those are just the newspaper headlines). Then there is Ke$ha, whose made her fame on looking and sounding like she’s a girl you met at a rave whom fell into a vat of glitter after an all-night bender. All jokes aside, I’ve always gotten the impression that while some music stars live the lifestyle (Lady Gaga has a new publicity stunt every two weeks to reinforce her “weirder than you” image) that the Ke$ha image is just that: a brand. Luckily MTV is swooping in to save the day with a new reality show that will allow me to test this hypothesis.

Ke$ha: My Crazy Beautiful Life follows recording artist Ke$ha as she handles her day-to-day life, both professionally and personally. The show hypes itself on it’s “rawness” and “realness”, with much of the documentary being produced by her brother, Lagan Sebert. Additionally, the show seems to take on more of a documentary feel, as the show intends on using approximately two years of footage to tell her story as opposed to the more in-the-moment feel of other celebrity pushing shows.

Without fail, we open on an exhausted Ke$ha’s back story, discussing how she dropped out of high school at 17 to become a musician and headlining a concert two years ago. The night after Kesha gives her mom a tearful goodbye before hitting the road for a tour. We then get more concert footage from various stops along the tour, before pausing in Los Angeles where she reminisces about a former flame whom she gave up to pursue her music career. We return from commercial to find Ke$ha borderline stalking Harold and being generally insecure while musing stoically about love.

After the L.A. show, Ke$ha gets a review from an unfavorable blogger that sends her reeling, before commenting on how certain bloggers cross the line and tear people apart (I could take guesses as to whom she is talking about, but why should I give them the free press?). Ke$ha then invites her best friend, Savannah with her to Scotland for the Glastonbury Music Festival (which she’s performing at). We then see Ke$ha give interviews to BBC radio in full blown glitter and makeup (which cannot possibly be comfortable). Ke$ha then has a meet and greet with the fans, including a particularly intense moment in Manchester where a fan wrote a letter about being bullied which she then read on the spot.

As a piece of art, My Crazy Beautiful Life comes together excellently as it darts between Ke$ha the performer, and Kesha the person. It’s not afraid to drag you into moments that seem like they would be incredibly awkward (case in point: the awkward limo drive by Harold’s house). Similarly, you quickly gain the impression that there’s a lot of inherent confidence and wildness in that glitter, because it’s often in those moments where she’s without the make-up that we start to see that so much of what makes Ke$ha, well, Ke$ha is becoming the mask to hide what’s a pretty emotionally bruised twenty-something.

The show as a whole is slick and well shot, but also is very heavily padded. We see at least three long concert montages in a show with a 22 minute run time. This is a shame, because Ke$ha the person seems fairly complex, with a mix of insecurity, raw honesty, and just enough of her stage persona to keep the proceedings interesting. Similarly I wish that the show had spent a little more time elaborating on her back story, as it was glossed over in the span of about 30 seconds and would have given a little more power to those human moments that start hitting you from minute one.

The Final Verdict: I was pleasantly surprised with Ke$ha: My Beautiful Crazy Life. I went in expecting that the show would be given the full MTV treatment – a booze fueled romp of glitz and glamour not too far removed from most of their hit programming the last decade. Instead, I got a show that actually lived up to it’s hype and is a fairly gripping documentary with what has to be the most music content a show on MTV has had in years. While I think the series probably would have been better served as a feature length documentary, it’s definitely worth checking out if you need something to watch at 11pm on a Tuesday.