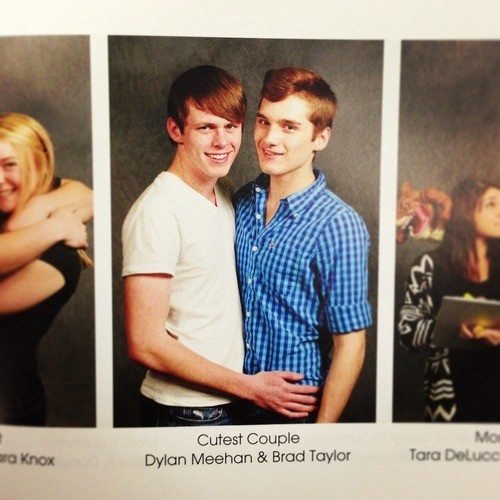 A picture can literally mean a thousand words, and in this case can be shared over 100,000 times.  A simple posting by a girl named Chelsea on her Tumblr page had that amount of shares in less than 24 hours.  You heard right, 24 hours.  The photo itself had a simple caption that read this-

“Two of my best friends won Cutest Couple of our senior class. First time in my school history a same sex couple has even been able to run for this category, not to mention winning it. So proud of them, and my school.”

Who was the most surprised out of all of this? Brad and Dylan themselves.  In a email written to The Huffington Post, they had this to say regarding the issue-

This whole thing has been a bit surreal for us because we have been raised to believe that love is love. We never realized that our happiness and openness would inspire so many individuals. The support we have received from our family, friends, and even strangers has led us to believe that our affection for each other is normal … When we started dating a year [ago], the thought of a photo of us traveling throughout the world would be a bit frightening, but now we are proud to be part of the LGBT community.

I wrote in the title of this article that it is historic for many different reasons.  One- regardless of what kind of high school and environment you have come from this is a huge shocker that they were even nominated for it, and two that they won.  What makes it amazing is how mature that particular high school was in choosing two people who just from the photo alone seem very in love yet their classmates viewed as just that and didn’t delve into homophobia or this being some gross prank that the senior guys pull for their own pathetic humor.

This may be a bit different but it has the same context.  When we did Homecoming King and Queen, the girl that won was usually the one that everyone expected to win and the guy that one was the “joke vote”.  I saw it happen pretty much every year and it made me disgusted that this form of bullying happened to something that was supposed to be nice and good for the man and woman that won it.  When I was a junior, there was an openly gay senior that was up for King and to many people’s surprise he won.  The football team looked devastated as the one they picked out to be thrown into the masses lost and for the first time in our school’s history a gay man actually won.  I made sure I screamed loud and proud to silence the haters and what made it even better was that he won authentically and didn’t stuff the ballot box like the others did in years past.

This rings true for Dylan and Brad.  I wish them nothing but happiness with each other and their own personal success.  If this is how the youth of this country are seeing people past all the homophobia that is out, then we have a good shot that this generation will be a great one.  Keep hope alive.