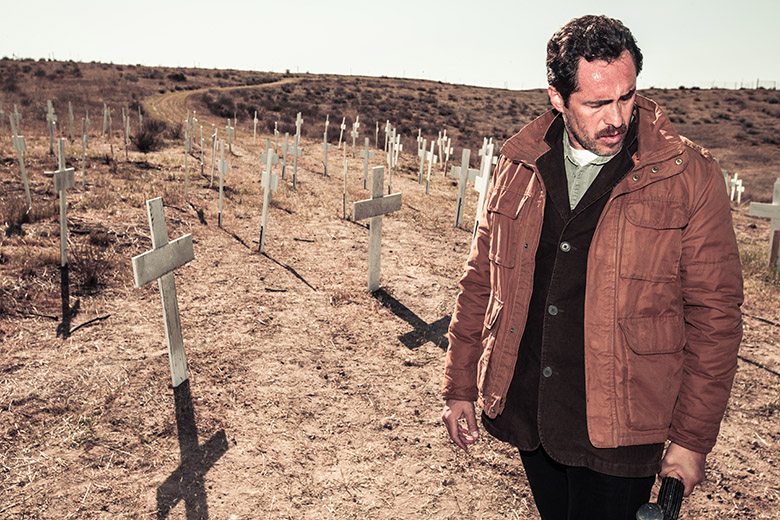 The Bridge: Wednesdays at 10 p.m. Eastern Time on FX

There was a time when HBO’s drama suite always had room for the sort of show that tackled contemporary issues in a thought-provoking and realistic manner, such as Oz, and The Wire. However, while HBO has managed to build it’s ratings back on more fantastical shows such as Game of Thrones and True Blood, FX has quickly taken the mantle over for these gritty, contemporary shows, with Rescue Me, Justified, and tonight’s show: The Bridge.

The Bridge tracks the story of two cops, the American Sonya Cross (Diane Kruger) and the Mexican Marco Ruiz (Demian Bichir) as they try to track a serial killer operating in both countries. Along the way, they must deal with the numerous problems that plague the border, including drug cartels, prostitution, political corruption and other minefields.

The strength of this show lies in its’ characters, and particularly it’s leads. Sonya Cross’s by-the-book cop is made extremely aloof (to the point where it’s debatable whether the character has Asperger’s) in nature in order to bring the trope to it’s logical extreme (as very little seems to emotionally sway her from cold detached logic). Meanwhile, Marco Ruiz is built to be a perfect counterpoint, a warm, pragmatic cop whose experience in Juarez tells him that sometimes the book needs to be thrown out in extreme circumstances. It’s in those moments where these characters are required to establish their respective quirks (Sonya’s awkward questioning of both the judge’s husband and the reporter stuck in a bomb laden car and Ruiz’s going to the “Captain” to get clearance to look into the case) that the writing shines most.

Of course, both characters are just subtle enough that they require strong acting to carry their nuances onto the screen. Diane Kruger does a superb job stripping Sonya of her empathy, while making sure to leave enough room to be emotionally broken when she finds out her lieutenant is eyeing retirement. Demian Bichir, however, steals the show with his incredibly charismatic approach to Ruiz, who gets to have lighter, wittier exchanges in many of his scenes. The supporting cast also holds their weight well, with performances that are generally strong all around.

I also appreciate the show’s fearlessness in pushing the theme of double standards and divides in numerous ways: our initial act, the reporter’s reaction to the crime wave in Juarez, the message from the “bomb” in his car. The most interesting use of this divide, however, is in the shows fearless use of Spanish (and subtitles) for most of the scenes in Juarez, implying an even further contrast from what’s happening on the US side of the border.

If there was any issue I had with The Bridge, it’s that the extended pilot is a little bloated at points. This feels particularly true in laying the roots for our B-stories, particularly the one spurring from the man with the heart-attack, as the ensuing scenes didn’t say particularly much, and felt lost in between the scenes that exist to reinforce the Cross-Ruiz dynamic.

The Final Verdict: The Bridge is the sort of show that has the potential for greatness, but after the extended pilot, I’m not entirely certain how far the show will pull back from its’ central storyline. However, even if the show does not reach The Wire-like heights, there is enough good just from the shows central pairing to make it worth watching. Hopefully as the episodes are cut down to 44 minutes in length, some of the fat will be cut out and the end result will be the pantheon level show FX is hoping for it to be. At the minimum it’s worth checking out, but on a quiet night for summer programming, it’s probably appointment viewing.