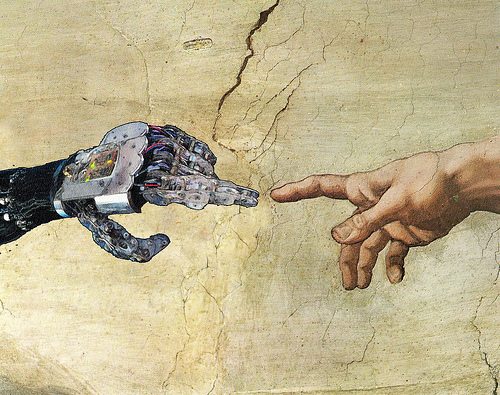 It is a concept which easily escapes the minds and comprehension of most given the scope of its significance. The singularity is a theoretical and mathematically predicted event set to occur in the near future. What sort of event? Well to put it bluntly, an event which will alter our entire planet and the way we live our lives. The singularity is near. Whether or not you believe it will occur, on some level, it has already started.

“A future period during which the pace of technological change will be so rapid, its impact so deep, that human life will be irreversibly transformed. Although neither utopian nor dystopian, this epoch will transform the concepts that we rely on to give meaning to our lives, from our business models to the cycle of human life, including death itself.” – Ray Kurzweil

In simpler terms, the singularity is a exponentially based hypothetical which says that the growth of technology, pertaining to the size and capabilities of individual computer processing units, is rising at such a rapid pace that it will surpass human intelligence within this century. Ray Kurzweil, an American author and futurist, is the foremost authority on the singularity, citing many strong evidential theories as to why this is indeed a real event. According to Kurzweil, given the current pace of technology growth (the current pace of technology growth rises more each single hour than it did in its first 90 years of existence combined – see chart), the singularity, which is a “zero point” where the intelligence of the technological world will surpass that of humanity, shall occur in or around the year 2045. Wrap your head around that. Most of you reading this will be alive in the year 2045.

The chart below gives a view of the rising of technological growth. The rise of growth is not a straight line, but indeed curves upward, and will eventually become a straight line. That is the singularity. 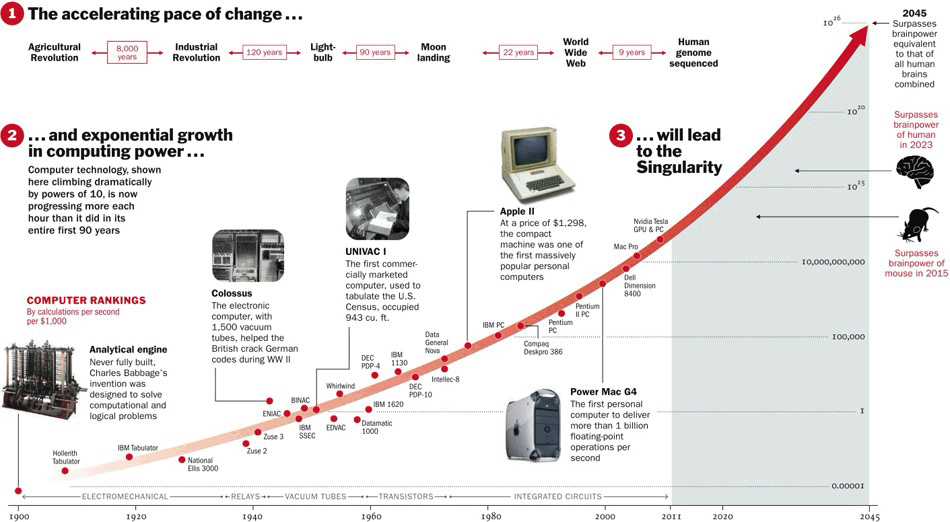 Need a little more breakdown and explanation? Watch This Video.

So what does this mean for us? Well, according to futurists, it means a complete change in the way we live our lives. Completely. In the coming years, great advances in science are expected, including graphic and virtual reality advances so pristine that the actual world and the virtual world will be indistinguishable. Kurzweil describes a future society where most of humanity lives in the virtual world most of the time, using it to live out fantasies and escape their lives. Nanorobotics is also expected to emerge, which is a science with endless possibilities. Imagine robots small enough to be injected into your bloodstream to prevent heart attacks, or prevent infections. Imagine robots small enough to eradicate cancer, or kill a cold virus before you even feel symptoms, or gather and burn fat within your body while you sit at your desk. As hard as it is to imagine, it’s being developed right now.

One can easily see how such advancements in technology would be astoundingly good for us as a species. But there are of course negative aspects to the singularity. To begin with, fully self-aware artificial intelligence. It doesn’t take a Terminator film to know that intelligent machines which are potentially billions of times smarter than us is not something that rests so easily in the back of your mind. The year 2045 is when the development of technology is expected to be “taken over” by technology itself, and is expected to thereafter grow at a pace faster than we as humans can even comprehend. In the interest of looking at technology as a series of individual and collaborative machines, we will have in essence created a new species and will have built them with the ability to advance themselves at their own free will.

Kurzweil wrote a fascinating book called “The Singularity is Near” in 2005 in which he actively predicts significant events and milestones in the growth of technology in the coming decades. While the events are certainly not exact (they are predictions based on exponential growth; Kurzweil cannot predict the future), they are in many cases feasible, and as a whole, incredibly overwhelming:

As members of the current race of humanity, it should be impossible for the occurrence of the singularity or anything like it not to affect and completely change the lives of every living person. As Kurzweil outlines in his writings, a post-singularity world would potentially be life on a completely different planet.

There is much debate as to whether or not this epoch of human life will even occur, or if so, to what extent. But it can be said that the evidence is certainly all around us. Each year cell phones and computers get smaller and thinner. Processing units grow in capacity and shrink in size. Medical breakthroughs are made every day. The theory that technology is certainly growing at a consistently faster pace is anything but a theory. Over 1.4 billion citizens of the planet earth have smartphones. Medicine utilizes more machinery as replacement body parts every year. The fact is, no matter which direction we move as a society, the singularity, or an event like it, is near. What is the best way to prepare? Stay informed, and know what to expect.