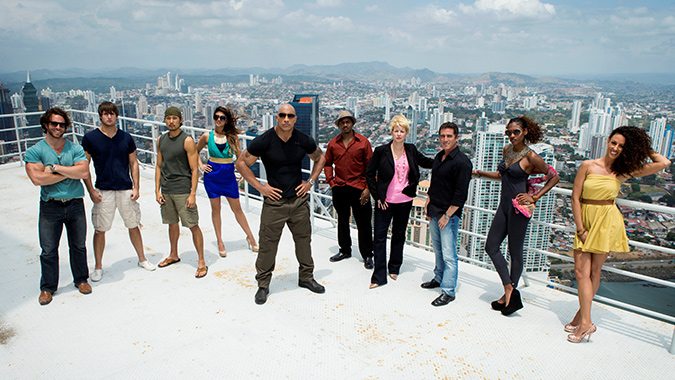 The Hero: Thursdays at 8p.m. Eastern on TNT

It’s incredible to chart the growth of Dwayne “The Rock” Johnson. He started off in football, at the University of Miami before ending up in the world of professional wr– **ahem** sports entertainment. It was a bit part in 2001’s The Mummy 2: Revenge of the Scorpion King, however, that allowed him to make a jump into movies, often alternating between family friendly Disney star and tough gritty action hero like his role in the Fast and the Furious series. TNT’s newest show is the newest step for The Rock, being a show very clearly molded from his vision.

The Hero is a reality competition that takes nine everyday people and puts them in taxing situations in order to determine which of them gets the title of “Hero”. These situations are designed not only to test their physical skills, but their mental and moral ones as well. Johnson not only functions as executive producer, but host and mentor to the contestants as well.

We open with the Rock explaining the game from the roof of a 60 story building. The mechanics of the game are very closely related to ABC’s The Mole. There are two challenges a show: a team challenge and a solo challenge. One person is designated as a hero who can put large sums of money in the pot or keep them from themselves. The solo challenges are worth $10,000 to the Red Cross and double the time for that weeks solo challenge. Our solo challenger, chosen from the phase 2 participants of our team challenge, then plays for the right to either put $50,000 in the team bank or they can pocket it, guaranteeing that they go home with a fairly large sum.

During the first challenge, Patti (one of our contestants not tabbed for the team challenge) is summoned up to the roof, where the Rock gives her an offer. $25,000 to the pot, or $25,000 in her pocket. After a struggle in which our two most musclebound contestants take 25 minutes to touch hands, our smaller pair acquires the second half of a secret code in 3 short minutes. The team makes it to the summit and puts the code in in the nick of time, giving the extra time for the solo challenge.

Returning successfully, our contestants must discuss whom they will send on the hero’s challenge, where $50,000 of prize money is on the line. Our heroes meet in a pretty cool superheroes lair, where they ask our three remaining heroes about whether or not they would be good for our challenge, which was teased as “in the dark”. The challenge involves walking around Noriega’s Bunker in the dark looking for a generator which will open up all of the lights, unlock the cash, and escape in 20 minutes or less.

Our contestants come from all walks of life including Cheerleader, Cop, Surgeon, Technician, Construction Worker, Fitness Trainer, Single Parent, Salon Worker and Professional Wrestler. Unfortunately, once the rules are in place, they’re all prone to bickering. While it can grate and get excessive at times, it’s intriguing how to see that the rules of the game can divide what one would think would be a fairly unified front.

The Rock plays an interesting combination of host, tempter, drill sergeant, and of course, the trademark flippancy that one would expect from Mr. Johnson. He balances these roles fairly well, though it should be interesting to see whom will take the temptation offer from the Rock, as some of our contestants seem to already have some degree of hero worship for him (no pun intended) from minute one of the show.

There is a ton of beautiful cinematography on this show, including great shots from extreme heights during the Tower Bank challenge and a lot of beautiful sunrise/sunset shots of the Panama city skyline. Similarly, the show’s night vision footage in the Noriega’s bunker challenge is pretty impressive. The challenges are also well designed, as both challenges were completed just barely in the nick of time (though those extra ten minutes were essential).

The Final Verdict: The Hero is one part Mole, one part action movie, and entirely balls to the wall. While the contestant’s bickering can get very annoying very quickly, this is the slickest and most compelling looking reality competition show I’ve seen to date. The challenges are also well designed and compelling to watch. It’s completely worth checking out, and could possibly become must watch if later episodes carry the same amount of entertainment value.