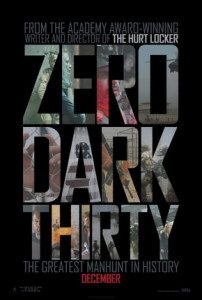 For at least a few weeks before it’s release (and for the subsequent month afterwards), Kathryn Bigelow’s latest film Zero Dark Thirty has been achieving a gargantuan amount of press. There’s been plenty of good word, with the film receiving nearly unanimous praise from critics for it’s deft  and relevant subject matter and appearing on many top ten lists. There have been more troubling headlines, however, with some sources calling the film a glorification of torture, an improper exposure to classified material, as well as a shallow reenactment on the war of terror that ultimately gives Osama bin Laden the last laugh (This Rolling Stone article is particularly damning). It’s certainly one of the most challenging films of the year in that regard, and I myself have found myself agreeing with both camps at times. Still, I feel that this a film that must be seen, judged and contemplated by each viewer on his/her own philosophies.

Zero Dark Thirty is very much a follow up film to The Hurt Locker, but it is in some ways an even more important film. The Hurt Locker is an intense study of American soldiers fighting a brutal conflict in Iraq,  while Zero Dark Thirty is a political thriller that acts as a reminder of the paranoia that plagued are nation based on the livelihood of one particular terrorist. As many of you are aware, Zero Dark Thirty is a dramatized account of the decade-long hunt for Osama Bin Laden. The film’s action orbits around central protagonist Maya (Jessica Chastain) a CIA operative with an obsessive need to find Osama Bin Laden. Through a chronological narrative that spans the September 11 attacks right up to the killing of Osama Bin Laden on May 2nd, 2011, Maya acts as our declassified government document that examines what happened to track down the Al Quaida leader. Bribery, speculation, interrogation and the much discussed graphic scenes of torture are the methods that follows in the film’s 157 minute running time.

The allegations that Zero Dark Thirty is exposing unwanted American secrets is not entirely unfounded, but it’s necessary for this type of film to be as truthful as the momentum would allow. Interestingly, the film could have been so much less than what it was, and it can indeed be attributed to the sudden slaying of Osama Bin Laden two years ago. Director Kathryn Bigelow and writer/journalist Mark Boal were planning to make a film about the 2001 siege of the Tora Bora where Osama was believed to have escaped without a trace, but then when he was actually killed in a raid the duo decided to change the film’s concept entirely. Using the research they had accumulated over the last year, the writing/directing pair composed a new film that would center around the whole zeitgeist for America’s hunt for Osama Bin Laden. 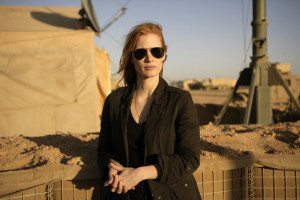 I have to admit, while watching the film I was a bit frustrated at times. The film does indeed begin with a torture scene, which immediately grabbed me, but afterwards I couldn’t help but ask if the filmmakers were suggesting that the actions of the Americans was fully justified. I was fully immersed in the film’s story and performances, and in all honesty it hardly felt like the move was over two-and-a-half hours. Still, my frustrations remained for most of the running time too (perhaps in no small part as we all knew what the ending would be), and I found myself wondering if the film could have posed more questions about did the ends justify the means.

Then…the final shot happened. After a visceral and dynamic climax where I couldn’t stand to blink for a moment, Bigelow and Boal gave us the final shot that the film needed. Not to spoil much, but it was a tender and emotional moment with the film’s lead of Maya. Up to this point we had indeed been seeing this war on terror through her determined mind. Now that it was over, however, both Maya and us viewers were left to ponder what it all meant. Perhaps I’m trying to over-analyze a film that is in many ways just an action film, but I personally don’t think that the filmmakers could have capped off such a compelling work of cinema with a more long-lasting image.

At the end of the day, Zero Dark Thirty is a fabulous political thriller, and the most satisfying American film of the year overall. Whether the filmmakers intended the film to attract this much public outcry is hard to say, but I’m certain they aren’t appreciative that their hard work is being judged as amoral. It’s also an absolute shame that Kathryn Bigelow  was denied a best director nomination this year (along with other shoe-ins like Paul Thomas Anderson, Ben Affleck, and Wes Anderson), but it seems the film has earned itself another merit. Zero Dark Thirty is easily the most controversial film, amidst the most controversial Oscar season in years. 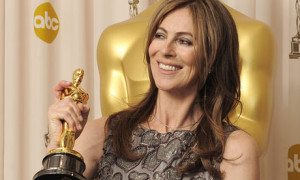