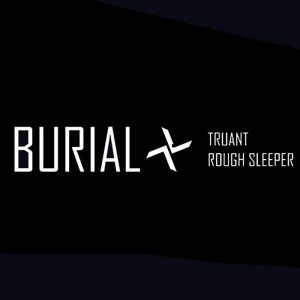 Similar artists – none (only cheap imitators)

Most EPs don’t leave the lasting impression that Burial’s last few have. With 2011’s “Street Halo”, last year’s “Kindred”, and now this, London’s finest producer has released the best material of his career thus far. Personally, i have always been an album man, but with the quality of these EP’s I wouldn’t mind if Burial never released a full length LP again!  With each release, William Bevan has continued to evolve his distinctive sound. While he is certainly a dubstep producer, Bevan’s music sounds like nothing else in that genre, and I often find myself describing his music as being emotive ambient music disguised as dubstep.

The two tracks here clock in at around 25 minutes, which is considerably shorter than Kindred, but this work is arguably more dense. Kindred closed with the revolutionary “Ashtray Wasp”, which was the longest and most surprising Burial track to date. The form of these two tracks is similar to the multi-part suite of that track, and they continue to explore the unexpected turns that his music can take.

“Truant” is the first of the two tracks. It opens the way you’d likely expect a Burial track to (foreboding ambiance, trademark vocal warble [a female voice saying “I Fell In Love With You], thumping bass), but then the track cuts out completely, giving a 1-2 measure of suspensful pause before the sounds re-enter and the momentum is turned up a notch. This is a trick being used by many these days, including “James Blake” and “The xx”, that is used excellently throughout this release. It is great to be reminded of how masterfully meticulous the vocal samples are in Burial’s music. Plenty of followers have attempted to adopt the ghostly vocal samples that permeate Burial’s work, but always fail in comparison. The track is riddled with other surprises as well, such as sudden rising chord sequences, but the main surprise is that the best is yet to come.

I will come out and say it, “Rough Sleeper”, is the track of the year thus far, and it’s going to be a tough one to beat. The first third of the track is led by an organ, which contains a specific tone that is so deep and affecting I could spend the rest of this review talking about it. I swear, it would be impossible for anyone to get bored with music this labored over. After a dozen or so miniature sections of bass and ambience, a new voice emerges stating, “Lights surrounding you”, when we are greeted by a heavenly bell section that carries the track for the remaining minutes. Describing all of this sounds like the track would be chaotic, or a take on maximalist electronic music recently popularized by “Rustie” or “Lone”, but the 13 minute length and the extent of this artist’s talent assures that all these components are in their proper place.

It should not be taken as an exaggeration when people say that Burial is the single greatest electronic producer of the time. He has clearly established himself as an unimitatable artist who is restless in his inventiveness and the extent at which he will challenge himself. While he clearly could have made a career out of repeating what he did on his “Untrue” album, he finds that making us scratch our heads is much more fun. We should be grateful.