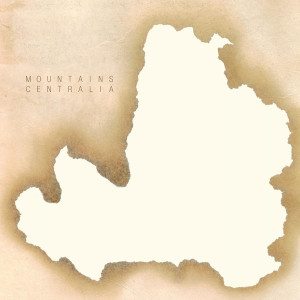 A first for my album reviews, I gave this a go with neither listening to any of “Mountains” previous work, nor knowing what style of music they played. My reasoning behind this was for the sake of removing preconceptions from the music, and allowing myself a clean slate in which to hear it. For some reason, I was expecting “Centralia” to be either “Godspeed” post-rock or “Crystal Castles” arcady synth pop. I found out that I had much more work cut out for me when it turned out that “Mountains” are more indebted to the Kosmiche of “Tangerine Dream”, or more recently, the now defunct “Emeralds”.

Brendan Anderegg and Koen Holtkamp of “Mountains” build their sound through the use of insurmountable synths/guitar. The Brooklyn based band creates effervescent soundscapes with a deeply textured, ever-changing electronic palette. While many spacey synth/guitar duos have been known for impromptu, half improvisational affairs, “Mountains” stand out (much like Julia Holter’s work) because it is organized and flows naturally from one theme to the next. Fear not, for this does not mean they don’t delve into the trippy, kaleidoscopic or hallucinatory; terms you would certainly use to describe the impeccable, 20 minute long centerpiece “Propeller”. The scene that “Mountains” are a part of is a cluttered one to say the least, but because of the fastidiousness that went into the production work, “Centralia” stands out among the band’s peers.

Centralia’s beauty is shown off quickly on 11 minute opener “Sand”. The heavy, stylized production incorporates whirring synths and a zoned out keyboard refrain. Near the end of the piece, the elements are washed out by swelling orchestral strings. These strings seem particularly demanding of one’s attention for how rarely they are used to such delirious affect in music of this variety. The album progresses to include other, surprising, instrumental forays, such as the arpeggiated acoustic guitar on “Identical ship” or “Tilt”, and the huge, feedback laden, black metal guitar chords on “Liana”. “Living Lens” ends the spaced out journey with a slice of delectable ambient wash. Highlights are abundant, so picking apart the album by playing tracks separately or out of order is not recommended.

It is easy for an artist to become engulfed in the random when dealing with music this massive, but everything on this album sounds necessary. There are no cacophonous yowls or overly drenched atmospherics. If there ever was a veil to curtain the talent of these two artists, it is surely pulled away on “Centralia”, and my god have they got some!