You are here: Home / ENTERTAINMENT / Album Review: Toro Y Moi – Anything In Return 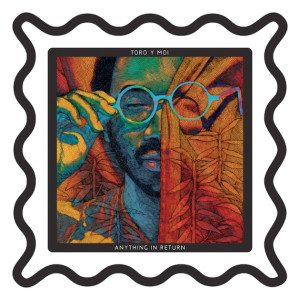 As unprofessional as it may sound from a critical standpoint, I really tried to not like this album. I tried to dismiss the infectious bubblegum pop songcraft and titillating synths. I tried to find fault in the high pitched teenage vocals which are used unflinchingly in nearly every track. I was originally tempted to give this a low(er) score because of how corny and sour tasting the tracks can be, but if I’m being honest, through all of these critical thoughts, in the back of my mind I was thinking about how I couldn’t wait to play this music at a party. With mind blowing production and a plentiful amount of singles, this is a release you will want to test out in large groups at preferably spacious arenas. While previous full lengths “Causers of This” and “Underneath the Pine” may have been more visionary, this is more impressive, ambitious and massive.

With 3rd album, “Anything in Return”, Chaz Bundwick has reestablished himself as a bona-fide pop star comparable to contemporary R&B acts “Miguel” and “The-Dream”.  His voice has never sounded this spot-on and confident. One could imagine hearing many of these tracks on the radio, which couldn’t be said about Toro y Moi’s bedroom-leaning previous work. This new found radio-friendly style may cause some detractors, but will undoubtedly gain him more fans than he will lose. Much like Daft Punk’s move from Homework to Discovery, Toro y Moi is on his way from being an indie producer to a sold-out stadium act.

Chaz Bundwick has never quite fit in with his peers of the so-called “Chillwave” micro genre (a tag which he of course hates, despite the fact that he is known as one of its progenitors). He is too disco to be compared to Panda Bear, too hi-fi to be compared with Neon Indian, and way too serious and non self parodical to be compared to Ariel Pink. Although on first listen one might feel that Chaz is “having a laugh” when a track’s influences span five decades worth of pop music, you will soon realize there is no irony. This is both a positive and a negative, for it is what makes Toro y Moi original as well as why the music can be so off putting.

The album doesn’t quite have filler, but the first four tracks pretty much sum up the variety and breadth of influences offered throughout. The first of these, “Harm in Change”, contains shimmering piano chords reminiscent of something off of a “How to Dress Well” LP. First single, “Say That” is brilliant funk pop that exists as the album’s danciest moment. “So Many Details” is a few shades darker, and although its rhythms are not nearly as avant as its creator believes they are, it is still a welcome and memorable track. “Rose Quartz” mixes an assortment of perfectly placed vocal samples with a steady drum pulse and trance synths. If these first tracks are deemed the most exciting, the remaining nine are comparatively chill (save the emotional bombast of the last two).

So it turns out that I do like this album. Perhaps it is a testament to its artist’s supreme confidence that “Anything In Return” can exist outside its noticeable flaws and be seen as a perfect party record. When I listen on in the future, I’m not going to be thinking about what this album doesn’t have, I’ll be too busy enjoying it as the complete statement it is.