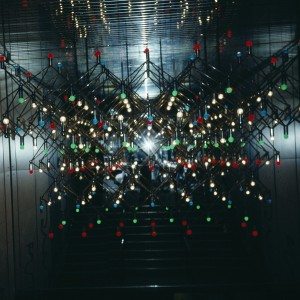 When first hearing that Four Tet had released a free to download album, and seeing the album consisted of one 38 minute track, I was under the impression that “0181” was one of the artist’s live DJ sets similar to that of his live Fabric mix (perhaps from one of his nights at The Boiler Room). As it turns out, this is a rarities/b-sides collection from tracks made around the time of Dialogue and Pause; Kieran’s first two albums as Four Tet. Those two albums, dating from 1999 to 2001 respectively, remain excellent representations of electronic music at the turn of the millennia, and should definitely be checked out if you only started following Four Tet after his sorta breakout album “Rounds” in 2003. This was a particularly crucial time period for the artist as his focus was shifted from his fading post-rock band “Fridge” to working on solo productions which turned out to be much more representative of his talent.

In comparison to his first two LP’s though, 0181 is less engaging and less than essential, standing more as an easy listening experience to play a few times and then forget about. Then again, it is a very generous offering for Kieran to be releasing this album completely free of charge, so if you have enjoyed his material in the past, you will want to hit the download button anyway; it just might not dominate memory on your iPod the way his other albums surely do.

Most of this “new” material could be lumped into the Folktronica genre which Kieran has moved passed with 2010’s mesmerizing “There is Love in You” and last year’s ultra modern single collection “Pink”. I say “most” because variety exists through traces of cool jazz, trip hop, robotic funk and 2-step. Describing this music as traces or sketches would be accurate because despite Kieran’s decision to release this as 1 long track, this is not a continuously flowing piece. There are pauses, and some sections feel unfinished, which gives an abrupt feeling to the music. This disjointedness clashes with the lively production to leave us with an album that lacks the artist’s trademark personality. However, the production work itself is still impressive, and certainly has aged gracefully in the often rapidly moving genre of electronica. One particularly memorable section samples bird chirps and softly toned guitars to delightful effect; another casts a piano interlude that recalls Brian Eno’s early ambient works. Every so often a section appears that sounds unique and not so easily comparable to his other work, but these sections never last long enough to leave an impression. If nothing else, this is a great reminder of how sleek Four Tet’s productions were so early on, but it could have been a showcase for how much untapped potential was left for future releases.

While this is an enjoyable album to listen to, in the end it leaves me wanting to revisit Four Tet’s other, more focused releases. Still, this doesn’t hurt his reputation in any way; he did release this for free after all. I applaud Kieran for being so incredible to his fans. I certainly remain a devoted one.