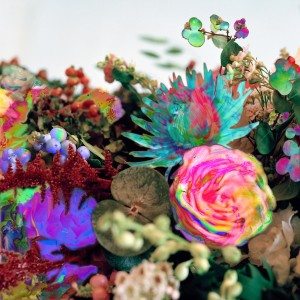 When I first heard Darkstar’s single “Aidy’s Girl Is a Computer” in 2009, it immediately became one of my favorite tracks from the unstoppable Hyperdub label. The glitchy robotic vocal samples and mutilated synth chords (which predetermined my obsession with co-Londoner James Blake), stood out as unique and intelligent compared to other so-called dubstep acts. I hesitate to say this group ever was dubstep, as within a few years they have progressed their sound to a point where calling them dub-anything would be absurd. Although I sure wouldn’t have minded it, this was a band that surely didn’t want to follow the success of their “Aidy’s Girl” single with another like minded track.

For their debut album “North”, which was released in 2010, the duo became a trio with vocalist James Buttery added to the mix. They focused on composing gloomy synth pop and learned to embrace more traditional pop song structures. It turned out they were damned good at it too, and it proved the group to be multi-talented. However, I kept waiting for them to jump off the deep end, so to speak, as they were absolutely capable of chartering uncovered terrain.

It seems my prayers have been answered because on “News from Nowhere”, their first album for Warp Records, Darkstar have dived in head first. The album is an eclectic overhaul to their previous sound that calls to mind some of the world’s best experimental pop acts. It now seems clear that “North” was a transitional album for this behemoth of sensory overload. Through the album you will be reminded of landmark acts such as Radiohead and Animal Collective, but the closest peer is pop-deconstructivist Matthew Dear, who also adapts new musical styles with the changes in the direction of the wind.

For a hint of the band’s eclecticism, the album goes from the blissfully ambient to the sublimely chill, to the paranoidly eccentric. “-“ is a take on King of Limbs era Radiohead and “A Day’s Pay for a Day’s Work”, has a chorus that is straight up Beach Boys in its a-capella vocal harmony. It’s all a technical marvel, especially on instances where the foreground pushes and pulls to cause tension before imploding into bits of crystalline fragments.

I previously mentioned Matthew Dear as a very like minded artist, and the match certainly fits. That artists’ last album ended with “Temptation”, which was a track that took his songwriting abilities to an unforeseen peak. The last track on this album, “Hold Me Down”, is similar in the fresh escapist pleasure in invokes. It is the perfect album closer that signifies there is much more to be heard from this act.

However, it did take me a while to see this album’s true potential, and it has some flaws that prevent it from being truly exceptional. For one, the vocals are superb in craft, but we hear far too much of them, and what James Buttery is singing about never truly shines through. On “Amplified Ease” I actually told him to stop singing (as if he could hear me). The top layers in general in this music are far less interesting than what lies beneath. Some of the best moments on the record are when the music has a chance to breathe, and we can hear just how much exquisite detail has been put into the production. The tracks where the vocals are used as an instrument, such as the final two, tend to be the most effective. Darkstar have the ability to wisk us away to far away worlds, but they often make it hard for us to get there as we have to sift through a layer of muck.

This is an album disguised as something it is not, or rather, it is disguised as something it is much more than. After a while, it is not the songs themselves that continue to grab our attention, but little snippets that are scattered throughout them. This is fine by me, because I have surely garnered a fair amount of pleasure from this album, but it makes me wonder if I would prefer an album from them that was entirely made up of the subtleties I adore finding in the crevices. For now, I am certainly on my toes as to what they will do next; I always seem to be with Darkstar.

8.) You Don’t Need a Weatherman