You are here: Home / ENTERTAINMENT / Side Effects: Half Empty or Half Full? 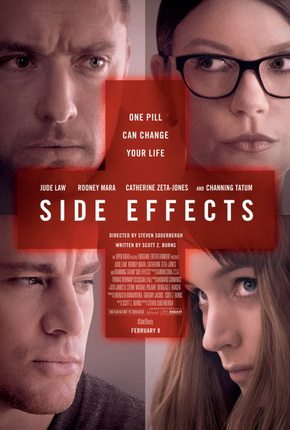 Who is Steven Soderbergh? Well, the short version is that he is a prolific and acclaimed American film director, but if we’re talking about his work as a whole than it’s harder to pin-point. Few directors have helmed such an eclectic volume of films with differing styles and genres throughout their career, but Soderbergh has done just that. From Oscar-nominated mainstream fare like Traffic and Erin Brockovich, to small indie films like his debut picture Sex, Lies and Videotape, Soderbergh has proven himself one of the hardest American film makers to describe. Hell, the three movies he released in the last 15 months (Contagion, Haywire, Magic Mike) are enough to show his wide range, as well as how rapid-fire a talent he is. However, in recent years Soderberg has said that he has grown disinterested in directing feature-length films and has said he is more interested in directing for television now. “I think that the audience for the kinds of movies I grew up liking has migrated to television,” Soderbergh says. “The format really allows for the narrow and deep approach that I like.” So his latest film, Side Effects, he claims will mark his departure from directing big-screen releases, and it actually proves to be a fairly adequate send-off for this reputable director.

The film is indeed a thriller, but I’ll digress from calling it “Hitchcokian” as some critics have. Rooney Mara stars as Emily Taylor, a woman who appears to be both grieving and suicidal. Her husband (Channing Tatum) has just been released from prison after a four year sentence, and she finds herself struggling to pick their marriage back from where they left off. After purposely smashing her car into a wall, psychiatrist Jonathan Banks (Jude Law) is assigned to care for her, and recommends her trying some anti-depressant medication. The results aren’t too efficient, and Jonathan then meets with Emily’s former psychiatrist, Victoria (Catherine Zeta-Jones). Victoria then recommends putting Emily on a new drug called ablixa, which actually works out great at first. Of course, this film’s needs a source of conflict so there are some…side effects involved.

To say too much more about the plot would actually prove detrimental to the viewing experience. The film is indeed “twisty” with an unexpected turn coming just before the end of the first act. The film almost becomes a completely different entity for the remainder of it’s running time, which will undoubtedly prove frustrating towards some viewers. I honestly was hoping the film would be more of a commentary on the flaws in contemporary health-care and prescription drugs, but it isn’t really. Instead, it’s just a thriller with a far-fetched plot, and more than a few cliches in it. It’s a shaky movie for sure.

That said, Soderbergh has managed to make good films off of mediocre scripts before, and that remains the case with Side Effects. Soderbergh gives the film plenty of ambiance through lighting set up, and assured camera work, that makes the film feel grounded and cerebral. Also, the performances are potent enough to keep the movie engrossing throughout. Rooney Mara is easily the highlight of the film, as the young actress continues to prove she is one of the most electrifying of today’s young screen talents. Completely convincing in her emotions, and unpredictable in her actions, her performance alone justifies the price of admission. Jude Law (an actor that has flirted with both obscurity and stardom) is very watchable as the amiable Jonathan Banks, even if it’s possibly because he’s the only cast member with a British accent. Channing Tatum fans might be upset to find that the actor’s screentime is limited here.

In the end, Side Effects is certainly worth seeing, especially given that the January and February months are both usually so dry in terms of quality cinema releases. It’s not a great movie, but it’s most certainly a good one, and one that could potentially be classified as a “medical noir”. Not a bad movie at all for Soderbergh to close his film career out on, and also one that showcases what could come from him becoming a television director.