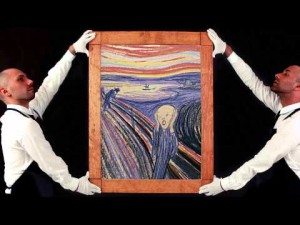 Anonymity has become a bit overused within independent  music in the past few years. Lately, it is being used to hype up an artist rather than remark on any truth behind the artist’s personality. Autre Ne Veut, who we now know as Arthur Ashin, has a much more complex and genuine reason for limiting his view within the public eye. He suffers from an anxiety disorder which has been the cause of much of his depression throughout his life, as well as the reason why his music career hadn’t kicked off sooner. Anxieties prevented him from making the overt pop music he had true passion for, and instead he took an easier route by composing ambient new-age music and jingles. On this appropriately titled LP, we are hearing this 30 year old expressing his true talent for the first time, and it turns out he is one of the very few who were born to make pop music.

Ashin’s 2nd album as Autre Ne Veut and first for “Software” (run by his previous roommate Daniel Lopatin a.k.a Oneohtrix Point Never) is a masterpiece.  It has taken me so long to write this review because of how emotionally overcome I am while listening to it. Ultimately cathartic doesn’t even begin to describe the raw purging that is evident in this man’s voice. He presents himself in a manner that is so distinct that the listener is forced to form a polarizing opinion. Depending on what side you come out on, his voice can either sound raucous, serene, overwrought, impeccable or messy. His previous self-titled album was similar in this sense, and albeit one aggravating track that my boyfriend calls “the worst song he has ever heard”, it was fantastic as well; however, on “Anxiety” ANV takes his adventurous style to the extreme, and the product is the most groundbreaking pop album I’ve heard in years.

The most obvious influence here in terms of vocals is Prince (maybe some Whitney Houston and Phil Collins as well), but in context with the production, no one is making music quite like this. Even avant-r&b extraordinaire “How to Dress Well” doesn’t seem comparable to the hyperbole worthy sound that ANV has created within the confines of his bedroom. ANV has more in common with artists who use their music to create new worlds, and represent abstract ideas that only appear in dreams (see similar artists)

ANV’s music explodes like little else I have heard. Opener and second single “Play by Play” is bursting at the seams with its own excitement. Like Dirty Projectors, Autre Ne Veut almost packs too many great ideas into one song. So many complex intricacies are present within the first three minutes that we are unsure if the chorus has arrived; when it finally does arrive, it is so brilliant that it doesn’t stop repeating until the song ends. Second track and first single “Counting” is just as fantastic. The chorus opens with a screeching boar oink that wouldn’t be out of place on a Scott Walker album, then, over a rapid fire arpeggiator Arthur sings /I’m counting on the idea that you’ll stay, I’m counting on the idea that you’ll say it’s alright/ which he states is in relation to his dying grandmother. It sounds like difficult listening on paper, but its execution is so perfect and natural that it will surely garner this artist some of the wide acclaim he deserves.  The album is made up of these moments where the music is bordering on being inaccessible, but pulls through by the skin of it’s teeth.

The first two songs set a ridiculously high precedent for the remaining eight, but there are still plenty more in the way of highlights. “Ego Free Sex Free” has a complex multi-part structure, and similar to many songs on the album, the lyrics lead me to believe the song is not actually about the sexiness that the tone invokes. “A Lie” is a beautiful vocoder ballad notable for its acoustic guitar and strings. “Warning” has some of ANV’s best sung verses and includes prog-rock instrumentation. You’ll want to be singing along to all these songs, especially with each song containing multiple climaxes, but a forewarning: it is not as easy as ANV makes it seem.

Final song, “World War” is deserving of the highest honors. I would even say it’s my favorite album closer since “The Suburbs”. Like that album, Anxiety closes in a way that calls us back to its beginning, wherein the album’s progression becomes clear, or in this case, clear-er. The lyrics here are all spur of the moment, and can certainly be confusing in the context of a song, but in terms of how we deal with relationships ANV’s words are profound. In certain life instances where we feel we have uncovered an absolute truth, a phrase will repeat in our head through a loop. These moments found on the opening and closing numbers can be seen as two separate epiphanies experienced during a relationship.

ANV is an inspiration for anyone who ever felt they had a gift for making pop music but wasn’t self-confident enough to ever release any material. Personally, when I am wailing aloud in the shower, I attempt to match the unbridled intensity of one of ANV’s climactic verses. It feels good, it feels invigorating, and it feels incredible to know that artists like this one still exist.

9.) I Wanna Dance With Somebody