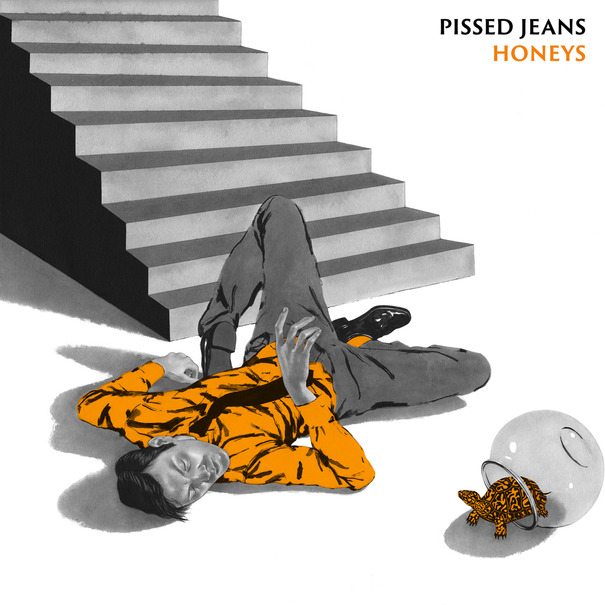 One of the things I really like about today’s hardcore punk scene is that it’s relatively easy to classify the best acts. For example: Titus Andronicus is the most ambitious, Cloud Nothings are the catchiest, and The Men are the most evolving. So, what title should I bestow on the Allentown, Pennsylvania quartet Pissed Jeans? Hmmmmm, the kookiest?

Well, when your band’s name is Pissed Jeans you aren’t exactly asking people to take yourself too seriously, and these guys are certainly more affably silly than any of their contemporaries, even Japandroids. Completely a punk band musically, as their sounds can be as droning as the Melvins, or as in-your-face as Black Flag, but their subject matter comes off as completely oddball. They mostly stay away from discussing left wing politics, or even too much about sex, drugs and violence. Instead the band is more interested with…mundane life. With songs about seeing movies (R-Rated Movie), envisioning imaginary worlds (Fantasy World), or middle-aged hair loss (Goodbye (Hair)), it might not even be accurate to call them kooky. Pissed Jeans are possibly the nerdiest, funniest and most relatable punk band to come out since The Descendents.

For the band’s third release through label sub-pop, Honeys, the band certainly isn’t going in a drastically different direction. The album tracks alternate between being kinetic and sludgy, and frontman Matt Korvette is still talking about the daily woes of working-class America, with subjects that range from health care to prolonged adolescence. They don’t have any tracks north of five minutes here though, and avoid epic mind fucks like The Jogger or Scrapbooking, but more importantly the band sounds tighter than ever. There’s a more evident layer of polish, but it’s still the same brand of hardcore we’ve heard from these guys before.

Honeys gets off to a rousing start with Bathroom Laughter, a really shredding track with an overt sense of fun, despite lyrics like “You’re in the kitchen crying”. The next track though, Chain Worker, is in direct contrast to Bathroom Laughter, momentum wise though, which makes use of droning guitar effects as Korvette recites a tale of an office worker who is about to lose it. The album continues in this pattern over the next 10 tracks (one an interlude), perhaps climaxing with the wonderful song called Cafeteria Food.  Anyone who has been forced to eat shitty food at their workplace/education will get a real kick out of this one, as the lyrics are honest, funny and scathing all at once. It’s also possibly the most varied song the group has made to date, as the track seamlessly blends the band’s slow-and-fast sensibilites, which perfectly contemplate Korvette’s altered vocals. I honestly could see them putting out a whole album of tracks like Cafeteria Food in a year or two.

Honeys is a more than solid release, from a energetic punk band that shows no signs of slowing down. Pissed Jeans is a band that forgoes cries of revolution not because they aren’t as intellectual as other punk bands, but rather because they’re mature enough to realize that saying “fuck you” to the man isn’t gonna keep you from paying taxes. This is great music to listen to at a particularly hard day at the office, as it will remind you that plenty of people understand your everyday struggle…and make awesome music about it.