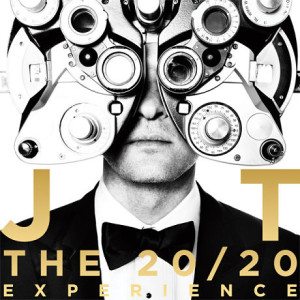 The past six years have been kind to Justin Timberlake. While he was always known as a talented performer with a silky smooth voice, his ambition has grown tenfold to where he is now recognized as a talented actor, producer, and a suit & tie wearing entrepreneur. He is a man who has gradually shifted his image to the point where the clan of haters that spawned against him during his intrepid N’Sync days no longer have means to continue hating him. However, to be an artist who can no longer be reviled is both a blessing and a curse.

Even for those of us who weren’t teenage girls in 2002, ever since the Timberland produced stunner “Cry Me a River”, JT’s appeal has become hard to resist. In 2006 with FutureSex/LoveSounds, JT broke free of being a guilty pleasure act and put out an honest-to-god brilliant record. Music fanatics left and right were coming out and renouncing their love for the singer. His hiatus brought upon further analysis that has led many to feel that FutureSex is one of the quintessential pop albums of the 2000’s. Although his presence in social media never escaped us for more than a moment, (and as funny as some of those SNL skits were) we soon missed hearing him in his pure non-comedic vocal mode. Regardless of whether this album is good or bad, no one should still be questioning whether it is worthy of your attention, like any highly talked about pop album, the question is if this release is worthy when compared to the anticipation and hype surrounding it.

So now that we are listening to the new album, is it really all that big of a deal? Actually, it really isn’t, and that is disappointing for those expecting something profound. Aptly titled the 20/20 experience, the album represents a glimpse into a perfect life — the problem is, perfect can be pretty boring when taken in art form. This dullness is especially apparent from a lyrical standpoint, because while hearing about perfect marriages and soul mates is lovely, it doesn’t quite get under your skin. This would be forgivable if the album was emotive or even catchy enough, but nothing here proves to be grasping on a deeper level. It’s not from a lack of ambition though, as only “That Girl” could be considered a concise radio-friendly pop song. The tracks mostly hover around the 7 minute mark, but unfortunately most are not worthy of their extended time. A few songs do prove to be sprawling spectacles of sound, but it is solely because of the production rather than song writing or vocal performance – both of which are surprisingly lazy.

And yes, this album has ridiculously good production, but would you expect anything less? I mean, just look at the amount of top-notch producers who worked on every track — it almost feels too obvious that this album is incomparably smooth and gorgeous. It doesn’t take away from the experience while listening, but I wish I had something real to hook me in that wouldn’t disintegrate with time like the beats surely will. I’m being a bit too harsh actually; the album’s saving grace comes near the end with the penultimate track “Mirrors”. It is a truly heartfelt and drenching love song that you will wait patiently to hear every time you play the album. While the rest of the songs are a mixture of fun, inventiveness, and sexiness, their most defining characteristic may be that they are hollow.