You are here: Home / ENTERTAINMENT / Upstream Color: Choose One: a) mesmerizing art b)hogwash 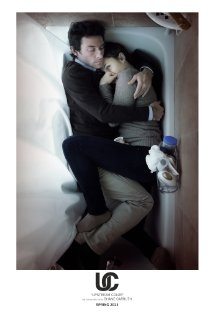 When Terrence Malick’s film The Tree of Life was released back in 2011, I noticed a few of the film’s most glowing reviews were saying that the film was groundbreaking. Some people felt that Malick had created a new form of movie making, and that the film’s meditative leanings would lead to more mainstream films that were edited in a similar fashion. I actually dismissed these claims at first, as while I felt Tree of Life was an interesting experimental film, I didn’t think it would connect with audiences in a way that would see similar films come down the pipe-line anytime soon. Thing is though, in the two years since that’s film’s debut I’ve noticed that the “Malickian” style has indeed been emulated for better or worse. Harmony Korrine’s Spring Breakers used a deliberately hazy narrative as well, and there’s already been much talk about a Sundance-premiere this year called Ain’t Them Bodies Saints, with people seeming to unanimously be dubbing it “The Lost Terrence Malick  Film”. Shane Carruth’s new film Upstream Color  (currently playing at The IFC Center) continues this dialogue still, but doesn’t make it anymore comprehensible.

To give a synopsis for this film is akin to explaining to a three-year old what exactly pornography is. The film isn’t just abstract in what it’s trying to communicate, but viewers are likely to be in befuddlement as to what’s happening within the film’s first few minutes. We apparently are introduced to a man(Thiago Martins, whom the credits refer to as “Thief”) who performs experiments on a particular breed of maggot, and then uses this insect to infect a woman (Amy Seimetz). We then see this woman is taking back to the man’s house where she appears to be under a trance. The man has the woman take out her life savings for him, and then she is sent to another man(Andrew Sensenig, “Sampler”), who performs a form of surgery that removes the evolved maggot from her body and into that of a pig. The rest of the film involves this woman meeting another man who went through the same experience (played by Shane Carruth himself), while we also see the Sampler character receiving telepathic information amidst his farm of pigs.

As bizarre a summary as this sounds, I couldn’t have really done that good a job of describing the film if I hadn’t done some Google-searching before hand. Upstream Color is indeed similar to Tree of Life, in that it is very reliant on montages, overflowing imagery, and it’s minimal dialogue serves more for symbolic purposes than to drive the narrative forward. This film, however, is even more rapid in it’s cutting, with scenes tending to be brief, and exposition kept to a bare minimum. The film can feel like an impenetrable Rubik’s Cube at times, and while I believe the film is composed in a chronological order, I can’t help but feel that the editing process was more concerned with making the film appear dense over anything else. The final act contains no dialogue at all, and contains many parallel shots to earlier ones in the film.

That said, Upstream Color is undoubtedly the work of a true artist as well. Bathed in a luminescent glow, the film carries a special aura to it at all times, one that I might even refer to as fetal. The film certainly shows that digital cameras have the capability to capture beautiful cinematography, something I feel Carruth might be trying to comment on, which is why we see early on in the film that our female protagonist appears to be working at a company that produces artistic CGI films. While it is a product of the internet age, Upstream Color also has a strong semblance of nature to it. Besides the aforementioned use of animals (maggots and pigs), Carruth also captures some dazzling shots of flowers, stones and trees, perhaps suggesting that beauty is still present amidst society’s influx of technology. The film is also rather interested in the human body, which leads to some rather disturbing moments. A sequence near the beginning of the film that involves Amy Seimetz character cutting herself is probably more intense than any of the gore in the new Evil Dead remake.

I have actually made some sense of what the film is trying to say after reading an analysis and giving it more thought, but I feel that sharing my thoughts would be a disservice. Half the fun of art is that it should be subjective, and provoke thought in the viewer based on their life experiences and views. Some people will find the film maddening, or even a gratuitous lesson in art-school film theory that isn’t concerned at all with delivering a message. What ever the case, Carruth has made a challenging film that’s tone is all to rare in American cinema. I often feel that most “surreal” American filmmakers fall into two camps: Lynchian and Cronenbergian. Upstream Color, however, doesn’t feel anything like something that David Lynch or David Cronenberg would envision.