You are here: Home / BREAKING NEWS / Album Review: The Flaming Lips – The Terror 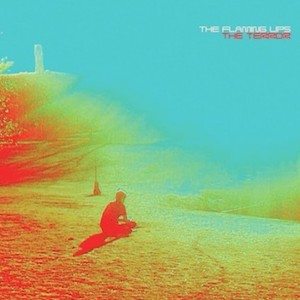 Wayne Coyne has made it clear that nothing can stop him from being the manic, hijink involved front-man that he is. So unless he dies, it is pretty safe to say that “The Terror” will not be the final album by The Flaming Lips. However, their 13th album represents a sort of ultimate destination that would act as the perfect conclusion to the group’s astounding legacy. Of course, let’s hope that isn’t the case.

While lately, the band has become increasingly known for their stage antics and headline worthy mischief, starting with their 1999 masterwork “The Soft Bulletin”, their subsequent full lengths have continued down the road of unbridled seriousness. They might not have had a perfect run, (“At War With the Mystics” being a noticeable low point) but their work has always possessed a beating heart that shows how dedicated these artists are to their work. And yes, they have also put out some incredibly silly non-album work, such as last year’s “Heady Fwends” collab and the 24 hour long “7 Skies H3”. Luckily, (so far) none of The Lips’ studio albums have came encased with anyone’s blood in it. So while they might be pranksters in the spotlight, there are few bands as hard working as this one when they sit down in the studio. Don’t expect this music to make you laugh; it’s more likely to make you cry.

This album proves to be yet another artistic shift for the band. With their busy past few years they have honed their craft and advanced their sonic capabilities to arrive at an entirely new direction. With 2009’s Embryonic, the band’s sound turned a few shades darker as they ventured into the depths of the experimental void. Now, with The Terror, they have climbed out of the rabbit hole to find that the world has fallen apart. The album is composed of dreadfully dark psychedelia, and speaks of a near hopeless post apocalyptic world bathed in red, radiated sunlight. The Lips have brushed upon post-apocalyptic premises in the past, but none have been as thematic or believable as this. In fact, this possibly ranks as The Lips most concise record; from the first note to the last, every theme flows perfectly into the next. It is even difficult to discern when one song ends and another begins – which means this is an album meant to be listened to in a complete session.

The music itself is a combination of hypnotic pulsating keyboards, ambient flourishes, steady Krautrock percussion, and the occasional scraping guitar fuzz. All the songs follow a similar formula, which means there are no guitar freakouts or mid album surprises. The Lips have traded in hit songs and singles for an album that breathes continuity. Because of this conciseness, there are moments during the album where the mind tends to wander – which begs the question if these songs could have been just as worthy with a few minutes shaved off. Still, there is nearly always something interesting to be heard in the mix if one is focused enough.

The heavy handed concept would have fallen flat if its creators weren’t able to realistically convey feelings of loss, so it is a good thing that The Lips continue to be masters of translating emotions to music. Although they won’t admit it quite yet, with Wayne Coyne recently breaking up with his partner of over 20 years and Stephen Drozd’s continued substance abuse, the album was clearly birthed out of painful experiences.

Amidst the darkness, Wayne is the component that holds all the others in place. After being lulled into a daze of abstract existential thought, his voice is what brings us back to reality. Under the impressive palette of sounds he sings in a mournful cry unlike anything he has done before. At certain moments he sings like he is on his death bed, barely being able to muster the words from his mouth. Again, it is impressive because it is believable; never through the impressive running time do we doubt that Wayne has felt the pain of a broken heart.

His lyrics are also among his darkest – like when he says “You’ve got some nerve you fuck with me” at the start of the 13 minute centerpiece “You Lust”. Through many songs he references the big ball in the sky, but instead of being the usual metaphor for good days and happiness, in The Terror, the sun is a sign of impending doom. While it may keep us alive, it is also what causes us pain and eventually kills us.

In the end, the album’s message is clear. Love and pain are connected in the same way as life and death. These things exist without us even wanting them to, and once we have fallen in we have no choice in how they end up. The Terror stands as a singular piece in the group’s discography. It may not be their most defining, and it certainly isn’t their catchiest, but in the end, it’s no less essential to their portrait.

7.) Butterfly, How Long it Takes to Die*

9.) Always There in Our Hearts*