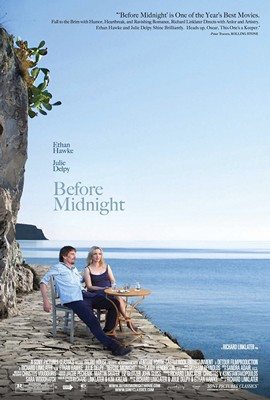 What is it that really defines a movie as being great in this day and age? Is spectacular writing ultimately what holds movies together, or how about the acting, as people generally seem to always incite on a performance? Many will also tell you that the technical merits of filmmaking, like editing and direction, are the most crucial components to making great cinema, and many of those same people would also tell you that there’s a critical lack of “real” cinematography in contemporary films. I honestly feel that all these elements are necessary towards making a good film, but a great one is a bit trickier. As an appreciator of film, and the viewer of so many, I have finally found myself tring to really pin down what a film needs to have in order for me to deem it a “must-see” or “instant-classic” or whatever critic slogan seems most approriate. A film has to really speak to me, be at least partially original, and also justify it’s existence as a film over any other form of medium. If a film can pull that off, along with the aforementioned quality concerns, then it stands a chance of me deeming it a masterpiece. It can take some time for me to really assess a film and decide on it’s merit, but I can gladly say that Before Midnight has certainly come closer than most.

Before Midnight is indeed the second sequel to the 1995 film Before Sunrise, which was followed by Before Sunset in 2004. For a refresher course on the two preceding films (which in all honesty you should have seen already), Before Sunrise was about a chance meeting between an American named Jesse (Ethan Hawke), and a young French woman named Céline (Julie Delpy). The two spend a passionate night together and vowed to reunite, unfortunately it doesn’t happen for another 9 years (see Before Sunset), when Jesse has now become a successful author, and lures Céline to meet him after making her a character in his book. Thus, this brings us to Before Midnight, coming 9 years after the last film, and finding Jesse and Céline as a couple, who now have a pair of twin daughters. Like the previous films, Before Midnight takes place in one day, and finds our couple reaching yet another crossroads in their relationship.

Linklater has always impressed me as a filmmaker as he has always managed to make his films ambitious, yet resoundingly simple. His 1991 film Slacker is often considered the progenitor of the 90s independent film boom, even though it’s essentially just a set of short films pasted together in a manner that’s kind of half-clever. Still, the film fluctuated on Linklater’s brilliant sense on nailing down a cultural aesthetic, which he would then go on to drive Dazed and Confused and even his more mainstream work like School of Rock. The Before movies, however, have always come off as more singular in his filmography. While each film is basically minimalistic, as the camera is never averted from either Jesse or Céline, yet they still stand as a testament towards what a powerhouse this trio is. Hawke, and Delpy never cease to amaze as this young couple, who seem so immersed in their roles it would seem fool-hardy to say that the actors themselves can’t possibly be in love. Linklater also proves his worth as an observational director in these films, as he’ll often have very long takes before cutting.

Before Midnight certainly has all of those hallmarks from it’s prequels, but the three contributors has only grown richer in their output as they’ve grown older. This is best exemplified in a scene during the first act where we see Jesse and Céline driving a car through the Greek countryside, with their twin daughters calmly asleep in the back. We hear the couple converse on their woes, with Céline exposing her frustrations on her career path, while Jesse talks about how he feels that he’s grown to detached from the son he had with his ex-wife. All the while the camera stays on the two characters without cutting for minutes, while their ethereal twin daughters lie in the back seat. It serves as a very thoughtful reminder of why Linklater, Hawke, and Delpy have had the creative stamina to create these films for two decades now: they really mine perfection from each other.

The tried-and-true formula of the previous two films follows through for most of the film’s running time. Still, I think that fans of the first two films might be rather surprised by the film’s climax. One could make a case that this is the sexiest of the three films as we actually get to see some hanky-panky between the two leads (as parents no less!), but wait till you see what the film’s half-sex-scene leads up too. Of the entire three-part saga, this one scene was the only one that really made me feel distraught. I found myself feeling real empathy for these characters, whom I had come to know over these three films, and really felt how they had matured. Thing was, the scene also very funny in parts too (“You are the mayor of crazy town”) , and certainly familiar for anyone who has been in a long-term relationship. It all leads up to a final scene which ends the film in a similar fashion to the previous movies: ambiguous, and more than a little bit hopeful.

So getting back to what I brought up earlier, about how I judge a film on how it justifies it’s existence, I feel what makes Before Midnight such a resonant and sublime film is in how the whole film functions as the Before series third-act. By incorporating our prior knowledge of Jesse and Céline, the film resounds in emotional affection, as we feel ever-grateful to take another brief glimpse into their lives. It’s the most dramatic and sad of the three films, but it also is a very spirited reminder of the bliss and cautions of true love. I honestly wouldn’t be surprised if the gang decided to get together for a fourth go-round within the next decade (and we all not-so-secretly hope they do too), but if not then this is a fine cap-stone for what is destined to go down as one of the most evolving and satisfying movie series of our time (see them all straight through and you’ll realize that this last sentence isn’t bombastic at all).