You are here: Home / BREAKING NEWS / Cronuts, the Next Foodie Craze That You Can’t Have

Donuts have been a pretty low key item. It’s something to have after church or something to cram in your donut hole on a coffee break. However, Dominique Ansel, head chef of the Dominique Ansel Bakery in Soho has come up with a new variation on an old favorite.

Instead of using regular donut dough, Chef Ansel has come up with a way to use croissant dough. This is certainly a novel invention, since you can’t just roll the dough into a circle and drop it in a deep fryer. However, master baker Ansel has created a special recipe that gets past all that, creating the new hybrid “cronut” which is now taking NYC and the US by storm.

I first heard about the cronut through the interwebs, from a friend on this webpage who posted this review, just in time for Mother’s Day. And it promptly sold out, and sold out, and sold out. After attempting to get this culinary delight, I showed up BEFORE the bakery opened, which is a rarity for me, only to find a line. I was there at 7:45 and was number 15. Interestingly enough, so was New York 1. Yours truly even got interviewed and is now a big TV and internet star!

At the time, there was a limit of 6 cronuts per person (that’s now changed to three), and luckily enough, I got the third to last one. I said hi to the baker, and he was pulling out another delicious looking pastry out of the oven. I asked what it was, and he said it was the DKA, his personal favorite. So, I got my cronut, a DKA and a cup of coffee and headed to work to try this little slice of pastry heaven. 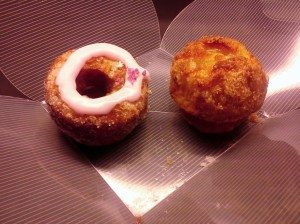 The cronut was good. Sugary, cream filled, and had a very different texture than your run of the mill donut. It even surpassed many of the donuts that the esteemed Donut Plant puts out. That being said, it wasn’t worth the effort put into it. Even less so, now. Mind you, it’s not bad. In fact, it’s quite good, but just seems like very little pay off for the effort you have to go to get one.

On the other hand, the DKA was worth every step I took. It was flakey, and warm, and buttery and caramelized. It tasted like autumn and brunch and everything delicious that is sweet and made out of bread combined to melt in my mouth. And they make them all day.

So, now that people are lining up at 6:30 for a bakery that opens at 8, and people are posting on Craigslist, waiting in line and charging 40-60 bucks for a cronut, do yourself a favor. Go in the afternoon, after the crowd has left, order a nice cup of coffee and a DKA and enjoy. There will be plenty of time to get a cronut in the fall when the next big thing comes around, and the Dominique Ansel Bakery has a whole host of delicious goods to satisfy you until then.