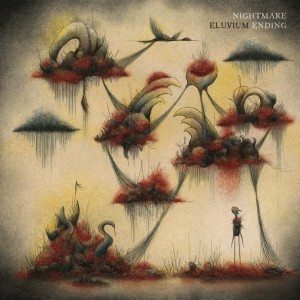 For me, ambient music goes along with food and shelter as one of the true necessities of life. It’s the way I fall asleep at night, it’s how I dream, and it has also taught me how to focus on life’s subtleties. While it is a genre that will possibly always be mocked (wrongly I might add) for being unobtrusive, or worse, easy to make, it is also a genre that has its horde of devoted followers, and because of that it will likely never die. The way I see it, ambient music is the music that most closely resembles life — you must know where to look in order to find it interesting and surprising, yet you must also let it sweep you off your feet until you are immersed in its beauty.

Portland’s Matthew Cooper, who has recorded as Eluvium for a decade now, might be the closest thing our generation has to a Brian Eno. I say that with the most positive of connotations, as his six previous full lengths under the moniker have seen him jumping from shoegaze atmospherics (Lambent Material), impressionistic piano (An Accidental Memory In The Case Of Death), emotionally charged post rock (Talk Amongst The Trees), to grand orchestral arrangements (Copia). Nightmare Ending, the artist’s seventh full length, is a double album that acts as a summing up of all the ground he has previously covered — while still throwing in a few necessary surprises as well.

The album starts off with “Don’t Get Any Closer” and “Warm”, which are the only two gapless tracks on the album. Together they form a 15 minute spectacle of harpsichord, dense piano chords and keyboards that are both majestic and airy. Seven minutes in, right when we begin to feel we’ve gotten the gist of where the song is going, an ethereal Himalayan vocal comes into play, shaking our expectations. It’s something you’d be more likely to hear on a dub techno track along the lines of BvDub, and it casts away any fears of this artist having run out of ideas.

The tracks all evolve in interesting and appropriate ways such as the first. While there are certainly moments of traditional ambient fare — where we feel as though we are floating through the clouds (“Covered in Writing”), the album covers a broad emotional arc throughout its 14 tracks. Tracks range from being unsettlingly dark to being as uplifting as an “Explosions In The Sky” anthem (EITS guitarist Mark T. smith is in fact featured here). It’s music that can work as well in murky, cloud covered days as bright, sun drenched ones.

Some of the most surprising moments come with the tracks that flirt with the idea of noise. While there is nothing too ear shattering here, “By The Rails” and “Envenom Mettle” are two of the rare percussion minded tracks in Eluvium’s discography, and they stand out as angrier and more raw representations of his style. ‘Envenom Mettle’ is one of the most epic tracks he’s ever put out (rivaling Lambent Material’s “Zerthis Was A Shivering Human Image” on Lambent Material), and it’s the album’s moment of full release. Meanwhile, solo piano tracks such as “Caroling”, and “Impromptu” recall Erik Satie, and act as interludes for the lengthier tracks. He also proves himself to be a class ‘A’ sound designer among the likes of Tim Hecker, with the fractured piano soundscapes of “Strange Arrivals”, and the radiant guitar plucking on “Chime”.

It can be tempting to loop this music on your stereo and let it play out while you go about your daily activities — and while that can be an enjoyable experience in its own right, this music is best appreciated on headphones. Calling this music “Loop-Based”, along the likes of William Basinski or GAS would be wrong, as this music has a very natural and human aspect to it. Everything here is in a constant state of motion, whether you notice it or not. Although this project was originally supposed to be released soon after 2007’s Copia, only to be put aside for a few years, B-sides these are not — and it certainly holds up to today’s standards. In fact, with Nightmare Ending, Matthew Cooper has made his most grandiose statement yet.

10.) Impromptu (For the Procession)