You are here: Home / ENTERTAINMENT / Much Ado About Nothing: Is it Really? 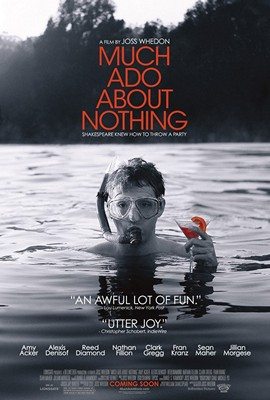 After directing what would become the third-highest grossing film of all time, Joss Whedon sure picked a peculiar way to spend his vacation: he shot a no-budget Shakespeare-update on an incredibly tight schedule 12-day schedule. Of course, fans of the beloved filmmaker/writer will tell you that Whedon always likes to keep himself busy, as well as see how his sensibilities transfer into other genres. Much Ado About Nothing is just that, and it’s every bit another curious (though non-essential) entry in Whedon’s consistently interesting catalog.

The story remains mostly unchanged from William Shakespeare’s original 16th century play, but the setting has been updated to the present day in what is assumed to be Los Angelas. The film looks at two sets of lovers: Benedick (Amy Acker) and Beatrice (Alexis Denisof), and Claudio (Fran Claunz) and Hero (Jillian Morgese), and it focuses on Benedick and Beatrice more complex relationship and “disdain” for love, over the giddy and overwhelmingly in love couple of Claudio and Hero. Following a set of over a dozen characters, Much Ado About Nothing wields a tale of sex, danger, mistrust and the usual.

Filmed in stark black-and-white and a minamalist aesthetic, Much Ado About Nothing is possibly the closest thing Whedon will ever get towards making an art film. The creator of Buffy the Vampire Slayer and Firefly has often been seen as a nerd’s director, but Whedon has expressed that his interests range outside the realm of sci-fi/fantasy as well. Still, while this film may not contain any vampires or Norse gods in it, it’s very much in line with the rest of Whedon’s resume.The film is very humorous, and adds quite a bit of slapstick and irony to the Bard’s original text. While some jokes are a bit forced (one scene that comes to mine is a part where character tries to eavesdrop on a conversation with Looney Tunes-esque results), but for the most part the jokes work very well, and update the comedy.

Whedon has created such a repertoire with his actors over the years, that the actors he’s casted in this film instantly feel at home with Whedon’s vision. The charming Amy Acker (Angel, Cabin in the Woods) is a very fine fit for Benedick, and she adds some great spunk to the character. Fran Kranz, a newer addition to the Whedon family as he’s only been working with the director since 2009’s Dollhouse, breaks his type-cast in this film, and shows he’s capable of playing someone who isn’t a geek. Fan-favorite Nathan Fillion is the film’s highlighted actor, however, as his depiction of constable Dogberry is nothing short of hilarious, and shows that the actor really does have the acting chops and comic timing to justify his cult following.

Yes, this adaptation does use the original dialogue as written by William Shakespeare. Thing is, as with other recent Shakespeare adaptions (i.e. Baz Luhrman’s Romeo and Juliet, or Ralph Fiennes Corionlanus) it feels a bit distancing that this present-day take on the material uses the Bard’s vernacular. While I wouldn’t quite say I was ever bored with the film, I really didn’t care for the characters in it, and there were points where I reached confusion (I wasn’t familiar with the source material). While in a way it is necessary to respect the delicateness of Shakespeare’s writing, I also feel that if Whedon had more time he could have cooked up some snarky dialogue that would have updated the play even more so. Instead, we have a vision of it that’s really pretty, and often funny, but also a bit blank when it comes to really resonating.

The most impressive thing about Much Ado About Nothing is that exists. Produced entirely by Whedon and his wife, and mostly on their own residence, it’s comforting to think that big-name directors can still find the capability to make low-budget art films, albeit with a rushed schedule. The film is great homage to William Shakespeare, and a reminder oh how instrumental his storytelling has been towards today’s entertainment. It’s just not a great movie, but it is certainly an appealing one. Enthusiasts of Joss Whedon and William Shakespeare will undoubtedly find a lot to love about this film, but others might want to give it a pass.