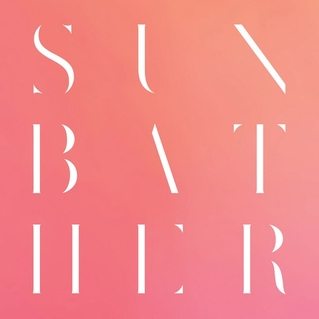 I often go through stages where I just want to listen to metal music, but I rarely call myself a metal head. Sure, I often blame my interest on music on the alternative metal bands I discovered as a teenager, such as System of a Down and Tool, but now I also often find myself seeing it as a genre that’s easy to half-ass. Any musician worth half their weight will tell you it isn’t difficult at all to make your instruments sounds loud, and I often find much of metal’s more known sub-genres (be it black metal, death metal, power metal, etc.) tend to rely more on gothy imagery than good songwriting. That said, when I find a metal band really finds a voice that breaks the mold and really demonstrates how powerful this music can be, then I often find myself tuned out once again to how blissful this genre can be when placed in the right hands. I can clearly say that the San Francisco five-piece, Deafheaven, have just released a sophomore album that is exactly that.

Those that have followed the bands previous efforts will see that the band has evolved plenty during their brief three-year existence. Formed as a duo in 2010, with George Clarke on vocals and Kerry McCoy on songwriting/guitar, the group always showed that they were a band interested in combining the vocals of death metal with the soundings of shoegaze. It wasn’t always very good, but the band showed ambition if nothing else, and they definitely became the focus of a lot of discussion once they signed to Deathwish, the record label founded and owned by Converge’s Jacob Bannon. People began to think that the insight of that legendary frontman was what was needed to really make the band take off. They then released their debut LP Roads to Judah in 2011, which definitely was more focused than their live efforts, but there was a sense that the pair were trying to squeeze to much material in their songs. Now, for their sophomore album Sunbather, the group has transformed into a full five-piece band, and have incorporated more elements from post-rock into their work. The result is an album that’s original, breathtaking, and even meditative.

Deafheaven makes their influences very clear, as the sound is very much borrowed from a plethora of great alternative bands. The shoegaze trappings prove to be transcendent, and often the album sounds like it could be Mogwai’s attempt at making a hardcore album. While often heavy, the music also utilizes calming instruments like piano, and often wants to invigorate the soul rather than invoke anger. The album’s mid-way track, “Please Remember” features guest vocalist Neige (Alcest) reciting lines Milan Kundera’s novel The Unbearable Lightness of Being,  which proves particularly haunting when placed against the track’s droning backdrop guitars.

While many will most immediately liken Clarke’s screamed vocals to the typical screech of death metal singers, it’s more relevant to compare Clarke to his label’s owner. Like Jacob Bannon has done with Converge for almost two decades now, Clarke adds a real passion and lyrical stance to his screamed vocals, only Clarke is accompanied by music that sometimes doesn’t even remotely resemble metal.  There’s such a rich thematic tapestry to the album, which is often difficult to pull off with an album that contains this kind of singing. Yes, the first time around you won’t be likely to make out most of Clarke’s lyrics, but the more you tune into the band, you find that there’s a real poeticism to what he’s saying, and his songs have a great sense of imagery. On the title track, Clarke describes a trip he’s taking through a rich neighborhood, wondering what it would be like to have such wealth. The song’s title, however, appears when he spies a young beauty and is instantly taken by the image. Love and it’s frustrations are big themes on the album, perhaps most evident on the song Dreamhouse. This tracks ends with lyrics that Clarke says he took from drunken texts he sent to a girl he was infatuated with: “‘I’m dying.’/ ‘Is it blissful?’/ ‘It’s like a dream.’/ ‘I want to dream.'”
In a straight through listen, there is an aura of sameness on the record’s later half. The melancholic guitars and warped audio which sounded so revelatory in the beginning do take a bit of a toll from the album’s hour-long running time. Still though, the repetition is necessary to really appreciate the band’s ambitions, and added listens will only take him more from the cascading guitars, and lofty scale. When the album closes with the epic Pecan Tree it really assesses what you just taking in: a fully realized modern art-rock record that knows exactly how to mesh the sounds of the old into a very cohesive and compelling whole.

Sunbather is exactly the type of album that many different kinds of music fans have been waiting years for. Whether you’re a metal fan who feels the genre really lost something after Isis broke up, or an enthusiast on post-rock who has been looking for the style’s next big thing, than I can assure you that Sunbather is what you’ve been looking for. Already rock critics have been talking about how the album has the potential to be very influential on American death metal in the years to come. If it does, let’s hope it’s imitators keep this in mind: What makes Deafheaven work is that they’re only partially a metal act.