You are here: Home / ENTERTAINMENT / A Hijacking/The Attack: Two Foreign Films that Breathe Life into Thrillers

We live in an age where it is considered by various scholarly groups that the intellectual thriller is dead. Seemingly month-in-and-month-out (if not simply every other week) Hollywood regurgitates cliched films that follow the same basic thriller outline, and studios make little effort to release something truly new or stimulating. Gone are the days when a filmmaker like Alfred Hitchcock regularly made critically lauded films that also managed to keep audience members on the edge of their seats. It’s a shame that American audiences can now go see thrillers starring Tyler Perry and feel it was money well-spent, but fortunately we still have plenty of bright spots in world cinema. For the last few years I feel that we’ve had some outstanding thrillers coming from foreign countries, that are more concerned with pressing real world issues than giving off a jolt. Two such foreign thrillers were just released in New York these past two weeks (that coincidentally have very similar titles), and for those looking to see a thriller that could also come off as art, than these two are closer than most. 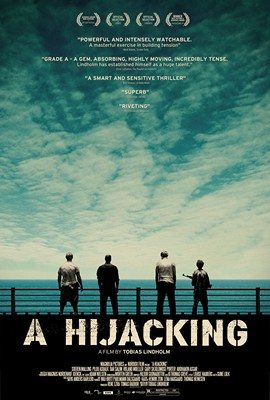 The first film is A Hijacking, which is a Danish film, but also one that uses multiple languages in it (including English). As the name implies, the story is indeed about a hijacking, this time involving a cargo ship being overtaken by a group of Somalian pirates. Told from the perspective of both the ship’s hostages and the shipping company that is dealing with the pirates demands, we examine this months-long ordeal through the film’s relatively brief hour-and-a-half window.

A Hijacking certainly isn’t dense in terms of it’s story, but it’s just that the film feels so palpable. The film mostly avoids dramatic tricks, and remains tense more for what it doesn’t show than what is does. There is very little on-screen violence in the film, or even action (we don’t even see the ship being overtaken by the pirates), but there’s still such a gnawing sense that something horrific could happen at any moment. We see the film’s cast of characters go through this harrowing situation, all while director Tobias Lindholm demonstrates he has a real intimacy with his characters, yet is also fascinated by the behavior they exhibit when placed under extreme circumstances. The closest thing to a protagonist in the film is the ship’s cook Mikkel (Pilou Asbaek), a loving husband and father who sublimely fills the role of the affable every-man. The film instantly depicts him as optimistic and caring, which allows us to give him full on sympathy, especially when it looks like his future isn’t going to be particularly bright.

Shot in a style that resembles a documentary, the film avoids flashy editing or swervy camera work, and there is limited use of music as well. It’s closely observed to say the least, and the little touches of grit only make it more believable. When one of the crew members talks about how they are living in their own feces and urine, we aren’t shown such disgusting imagery, but we know full well that he’s telling the truth. While immensely realistic the whole way through, the imagery has it’s serene moments too. During the film’s climax there is excellent use of tracking shots over a vast blue ocean, that gives us a much deserved bit of calmness after such tremendous tension. 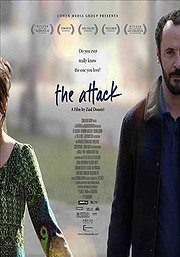 The second film, The Attack, is an Israeli film that also delves into a story that wouldn’t seem out of place amidst today’s headlines. Set in modern day Israel, the film follows esteemed doctor Amin Surfari (Ali Sulman), who finds himself involved in a case involving a suicide bomber. Police say all evidence points to his wife (Reymond Amsellem) being the perpetrator of a devastating explosion that killed over a dozen people. At first, Amin refuses to accept such a claim, but then he discovers a letter his wife sent her that acts as a confession. He travels to the Palestinian territories in order to uncover the truth about his wife.

The Attack feels more like a narrative film than A Hijacking does, as it uses flashback sequences, and lush cinematography. Still, it is most admirable for how it uses the template of a mystery story in order to explore a very timely matter on race relations, and religious groups. As the film goes on we discover what drove his wife to do such a horrible act, and it also gives us a clearer idea on how religion and background can have such a heavy dictation on someone’s actions. Given America’s relation with the Middle East, if anything The Attack is the more politically relevant of these two films.

Both films come highly recommended, and not just cause they’re unconventional. There’s a real sense of urgent and human drama to them, in a degree that most contemporary American action-films lack. Rather than given us far-fetched situations with results that rely on cliches, A Hijacking and The Attack remain firmly in the world of reality, both in subject matter and tone, and provoke thought as much as they serve the basic purpose that a thriller holds. Those looking to see a quality art-house film in theaters right now will find plenty to like in both of these pictures.