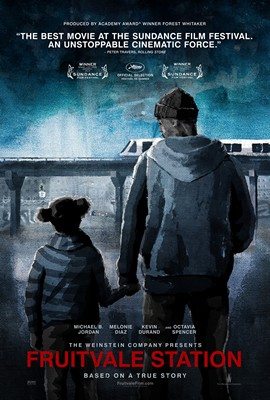 They say that truth is stranger than fiction. Perhaps that’s true, but I don’t regularly feel that true stories make for better movies, especially when one considers all the great fictional movies out there. Don’t get me wrong, I feel that there have been plenty of great movies that come from real life events (The Social Network, All the President’s Men), but the last few years have seen an onslaught of bio-pics and “true story” flicks that seem so awash in self-sentimentality and Oscar-bait hogwash, that at the end of the day I would much rather watch a movie like Knocked Up, over something like say…Ray. Still, every so often a film comes along that centers on a really unique occurrence, and knows precisely what to say about it. Fruitvale Station is exactly that kind of film, and one that really succeeds due to it’s brevity and direct message.

The film recounts an event that occurred in the Bay Area in California on New Year’s Eve of 2008, and completely focuses on Bay Side resident Oscar Grant (Michael B. Jordan).  Grant is a 22-year old African-American male who is going through a very difficult period in his life. He’s raising a young daughter (ahna O’Reiley) with his girlfriend (Melonie Diaz), all while he’s unemployed. Convicted in the past for drug dealing, Grant is trying to put his criminal past behind him, even while he still can’t seem to find legitimate work. To take his mind away from his troubles he decides to go out with some friends for New Years, and take the train with them into the city.  Sadly, it all goes horribly wrong when he comes across an individual that he had beef with in prison, and unruly cops immediately come to the scene.

We as viewers know the film’s tragic outcome before the title card comes up (just in case you don’t, however, I won’t be spoiling it), as in a sense Oscar Grant ended up becoming a Rodney King for the digital age that early New Year’s Morning. Numerous onlookers caught the horrific event on camera, and digital cellphone, which led to the public learning almost instantly about it. The footage became hot topics on media outlets, and protests immediately arose against the tactics of Californian police officers. Four years later, the story is perhaps even more sickening, when one considers that the guilty parties didn’t truly receive just punishment. It’s background was easily the reason that a venerable African-American actor (Forest Whitaker) came on board to produce it, especially as Oscar Grant’s mother and girlfriend were heavily involved with getting the project made as well.

Fruitvale Station, however, realizes that it is still a film, and therefore it needs more than the weight of it’s subject matter for it to really stand out. This film is the first feature-length film for director Ryan Coogler, and he’s already proven himself to have an extinguished sense of drama and humanity. While his camera work is often vivid, Fruitvale Station is more character-driven than it is interested in it’s exterior. Every scene of the movie is about Oscar Grant, whether he’s in it or not. We meet his family, as well as the other individuals that he meets throughout his day, all of which demonstrates the man’s list of faces. He’s a loving father, a mis-guided youth, and someone who really wants to make a difference, but also can’t entirely escape his thug background. At a mere 90 minutes, Fruitvale Station is direct about making every scene count, and the scenes that foreshadow the inevitable violence really make their mark. A scene where Oscar Grant takes care of a mortally wounded dog comes off as particularly necessary, especially as it’s the only scene in the movie with overt symbolism.

Seeing that the film is so invested in it’s protagonist, it obviously needed a talented actor to pull it off and Michael B. Jordan does just that. The actor has mostly been recognized for his supporting roles on some of televisions’s most acclaimed dramas (The Wire, Friday Night Lights), but hear we’re really able to see the actor show us his chops. Jordan does that in spades, as he immediately makes Oscar come off as a gentle man, despite his history as a felon. His consistent use of slang words (the term “breh” is frequently used by him, which appears to be the Bay Area equivalent of “bro”) could have come off as laughable with just the slightest effort, but his confident acting and the exemplary film making only allow viewers to realize that this movie is realistic to the maximum. I for one am hoping that Coogler and Jordan collaborate again, and very soon.

In recent years we have seen films try to break convention in recalling true-life stories. Richard Linklater’s Bernie used a faux-documentary style to it, and The Social Network became a critic’s darling mainly due to Aaron Sorkin’s complex and subversive screenplay. Fruitvale Station breaks the mold by a very realistic account of the tragedy at hand, but by also having some stylistic flourishes that only enhance the film’s message. Throughout the film we see Oscar using his cellphone, but rather than cut away from the action to show what he is texting, the image of the cellphone chat is super-imposed on the scene (a similar visual motif that was used on the Netflix tv series House of Cards). It’s a visual motif that shows how cell phones are not just a tool for a daily life, but the most available means to record it. As mentioned before hand, the reason this event gained so much attention was because so many people captured it digitally, as we then see during the film’s climax. The cellphone visualizations are the only stylistic flourish that the movie has, however, and for the most part it remains a highly palpable movie going experience. In fact, one categorization for Fruitvale Station is this: slice-of-life.

It’s easy to see why this film proved to be both a crowd pleaser and an award winner at Sundance this year. It’s a very human film about present day life in America, that just also happens to have a really devastating conclusion. While many will see the film as a lash against racially-derived police violence, it also is important to realize that that is only just one scene in the entire film. Fruitvale Station is about contemporary life in America, and how there is beauty to be found in it. Beauty that is all the more sacred when one realizes that it can all be snatched away from you in a second.